I have been on a tremendous Bastard Noise and Man Is The Bastard kick lately. I can't seem to get enough eartime with the countless hours of legendary SKULL recordings. I have been leaning more towards the Bastard Noise side of the coin though. I'm pretty sure the news of the upcoming Bastard Noise/Sickness collaboration 12" and the "The Honesty Shop" LP with the Eric Wood/Anthony Saunders line-up set it off. Needless to say, I'm extremely excited to hear both. Saunders and Wood blew my brain apart when I saw them this year in NYC. They performed some classic tracks ("Remember Thy Creator" was amazing), and some wonderful improvisations of harsh, sci-fi electronics. One of the coolest sets I've ever seen by far.
Recently Mr. Wood was very kind to me and sent over a handful of newer Bastard Noise records. To say I was deeply grateful is an understatement. This new 7" here, the 5th installment in the legendary "Our Earth's Blood" series, is one I've been very curious about since it was announced. A new nine track 7" of collabs with some of Japans best extreme sound artists. Released under Eric Wood's own label, Skull Records, limited to 300 copies on orange/yellow mix vinyl, 45 RPM. 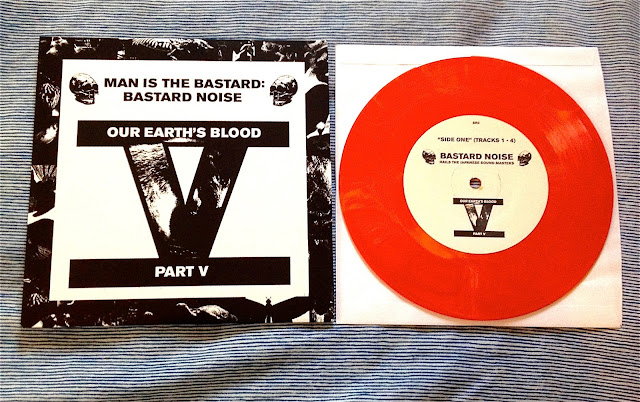 The "Our Earth's Blood" series have all been pure noise records. Started in 1993 when the first 7" came out under the Man Is The Bastard name. Still, a very overlooked part of the SKULL's output. The 1st 7" and the follow in the series, the split 10" with The Locust, are two of my favorite records in MITB's catalog. I'm always trying to push the later on people because I think it's so brilliant. "Part IV" came in the form of a staggeringly massive 5xCD box, released in 2009. Featuring long-time and new collaborators on almost every track. This also meant longer song lengths, and is one of the most extensive Bastard Noise releases ever. "Our Earth's Blood IV" certainly dwarfs it's 7" follow-up, but this records impact is not to be underestimated. Released mainly to coalesce with the Bastard Noise Japan tour earlier this year. The line-up of collaborators honoring and "hailing" that country proudly. 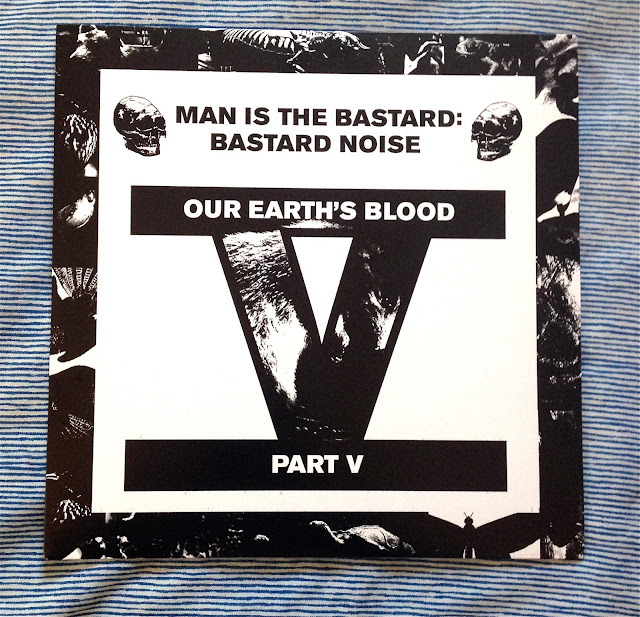 "Our Earth's Blood V", is yet another unfortunately urgent and timeless message to society and the human race at large. That we are the true scum species on the Earth, and the #1 threat to it's health and beauty. The apocalypse is now and only love can help slow it down. Another diatribe of vitrol from Bastard Noise to the modern age, in both directness and sound. The recordings here are remarkably clean and clear, every texture and sound shine out in the mix. Obviously, all the tracks are on a severely tight time frame. But these masters of sound use their talents and time very efficiently. Personally I find these short, to the point, vignette type pieces to be incredibly inspirational. They hit me the same way a good 1-minute grindcore or punk song does. They get everything they need to say and play out in no time at all without any bullshit. And the consistency in quality and message on this record does not drop at all in it's run time. 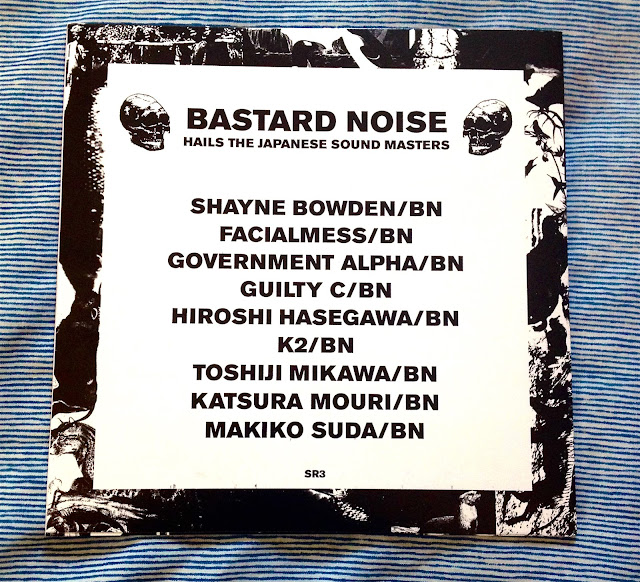 Each of the nine tracks on here are simply titled "Statement I-IX", going down in numerical order. The title's reflect the lyrical format perfectly. Every song is indeed a "Statement", oftentimes only lasting a few sentences and less then a minute. But the message Eric Wood and Co. are yelling at you couldn't be more clear. The crazy amount of exclamation points in the lyric sheet should help hit the nail on the head even more. Transitioning to the music side of the record, it's exceptional. Every track balances each artist evenly. You can always tell when any of the Japanese artists are lending their own unique contributions. Naturally sticking largely to the harsh noise/power electronics side of the spectrum. All tracks but one features the classic Eric Wood growl and screech. The first two tracks, with Guilty Connector and Shayne Bowden following, are solid openers that set up the climbing intensity that follows. The tracks with Facialmess, Government Alpha and K2 are solid, abrasive sets of PE. With the classic cut up/harsh noise that these respective artists are known for. The only instrumental track with Toshiju Mikawa (most famously a member of the noise legends The Incapacitants), is a real highlight for me. Cut up edits, Trogonomic oscillations and some wonderful stuttering, staccato textures are all active and sounding off. And what sounds like a stretched, digitized vocal sample? It's a wonderful track. The A-side closer with Hiroshi Hagasawa (who most noticeably goes under the C.C.C.C name), is another one of my favorite tracks on here. Super harsh distorted walls of junk metal crash and form into ambience and vocals. Eventually climaxing in an explosive synth chord, and more harsh noise. The closing track, the shortest on the record, is a duet of sorts with Makiko Suda (vocalist for Flagitious Idiosyncrasy In The Dilapidation). Both her and Eric roar and yell over the prettiest ambience and synths on the record, signing off before you barely even said hello. 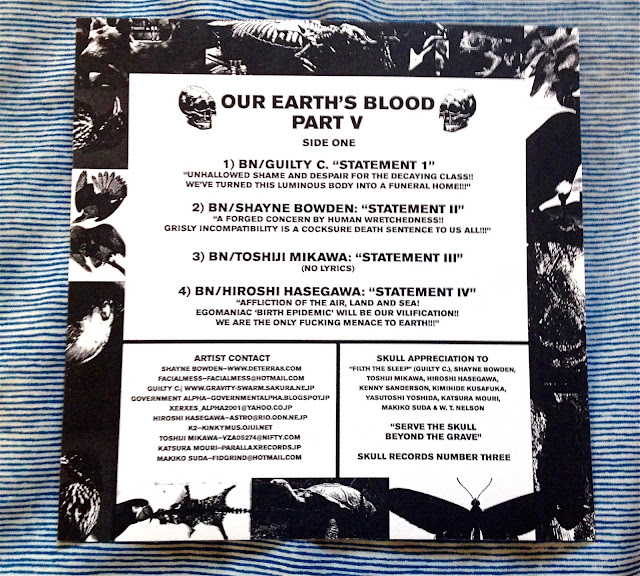 The packaging for "Our Earth's Blood V" is classic SKULL aesthetic. Bold, black font, quotation marks everywhere, and stark, black and white imagery. The record sleeve is a glued one (my favorite), and comes with a double sided insert with lyrics. Eric really does treat his records well and has spared no expense on this project. A numbered, test press version was also released for the previously mentioned tour, on black vinyl and limited to 100. It came with a shirt or a patch I think. 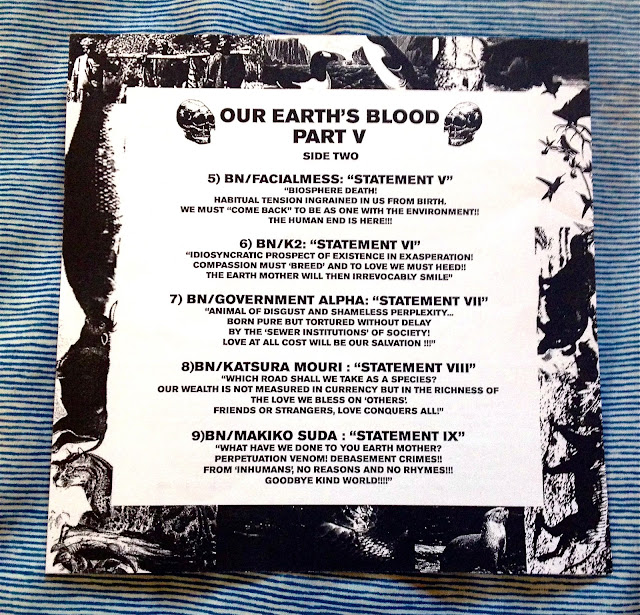 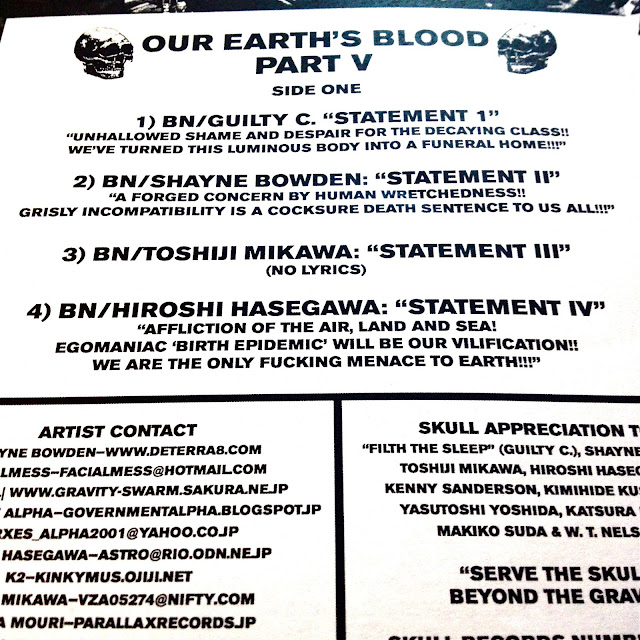 "WE ARE THE ONLY FUCKING MENACE TO EARTH!!!' 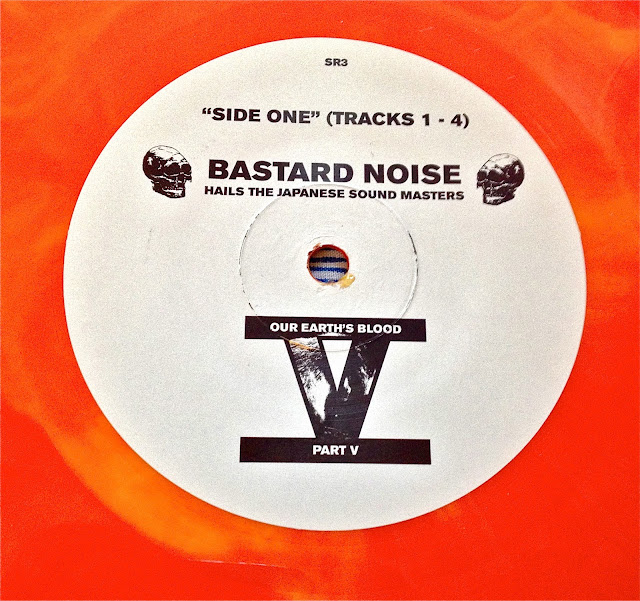 Another triumphant chronicle in the "Our Earth's Blood" series, and another essential item in the Bastard Noise catalog. Thankfully, you can still find this record in many distro's with a quick google search. Best band ever.