I've posted my list of favorite records from 2017 in a couple places on the interwebs. Several of them individually on here over the year too. I'll try to catch up on a few that I feel compelled to talk about (the new Hummingbird Of Death LP and Beggin For Oxy's 7" to name a couple). This record right here though, was by far the my most listened to and cherished piece of wax that was released last year. One of my new favorite grind records, the BxSxRx/Parlamentarisk Sodomi split 12", released by Haunted Hotel Records. On orange/brown split vinyl, limited to 500, 33 RPM. 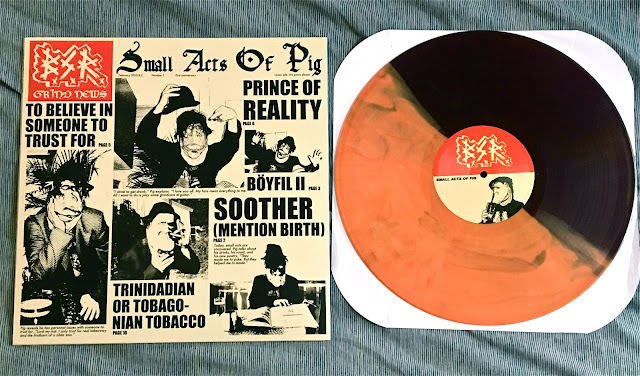 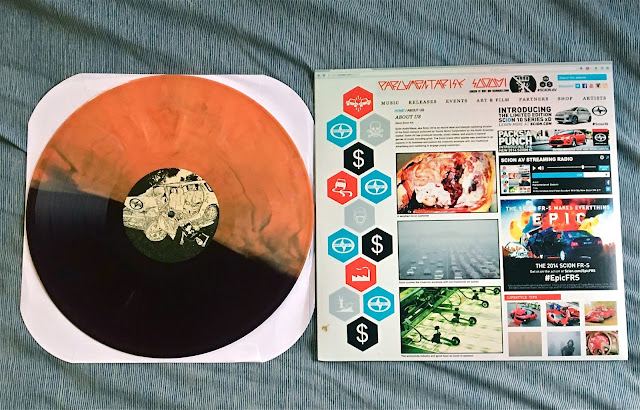 Everyone and their dog knows Parlamentarisk Sodomi; the one-man grind band brilliance from Norway. Mandated entirely by a person known by many names, mostly by Steinar. We all know him, we all love him. Mr. Steinar released multiple records from his many bands and projects in 2017, all of them absolutely fantastic. Nowadays Steinar has taken a liking to releasing split records with another one of his own projects, in this case it's BxSxRx. Basically P.S. as a trio, featuring people from Laserguys and Hellstorm. 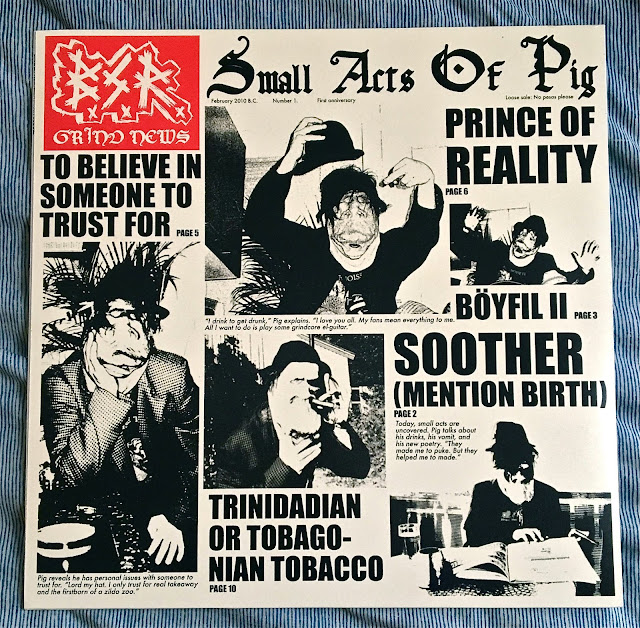 I love Parlamentarisk Sodomi dearly, and their side is great and I'll get to it. But the BxSxRx side, this is my jam. I've listened to their side probably close to 100 times this year. It's some of the most exciting, refreshing, original and if I dare say, rocking grindcore I've heard in a long time. Coming in at over 20 minutes, their half could be a full LP as it is. Consisting mainly of reworked and rerecorded versions of songs from their "Böyfil II" demo, plus a couple new ones. Steinar's signature wrist-snapping riffing is crystal clear, so sharp and accurate it's almost superhuman. Lots of chromatic chord progressions and guitar techniques, like hammer ons and atonal chords that stand out. The guitar tone is bright and very slick, but with the backing bass and drums everything sounds incredibly full and almost chaotic. The drums in particular add a very interesting sound. Often times they are quite loose, almost like they're trying to keep up with everything going on. It's a very interesting dynamic, if you can call it that. Especially when coupled with the razor sharp precision of Steinar, and you can audibly hear the drummer finding the groove. All that said though, it fucking works, and it really makes sense when put in context with the sound of BxSxRx. They are loud, cartoony, and over the top.
I gotta talk about the vocals too, probably my favorite part of the band. All 3 of them contribute on the pipes, and they are off the wall bonkers. Sometimes taken to such an extreme over the top level it reaches absurdity. But they're so engaging and captivating, I just adore them. I can't remember a grindcore band I could take seriously that had low growls that sound like the Gungan leader from "The Phantom Menace" ("Anal Queen Of Minor Preperations"), or have cock rock falsettos mixed with NY thrashcore bro vocals. Everything is just taken to such a perfect level and it's all wholly original. Although I have to admit they cut back on the zaniness of them compared to the demo, which is truly demented. I consider this to be perfect grindcore, I'll listen to it for many years to come, and I hope the band records more material in this lifetime. 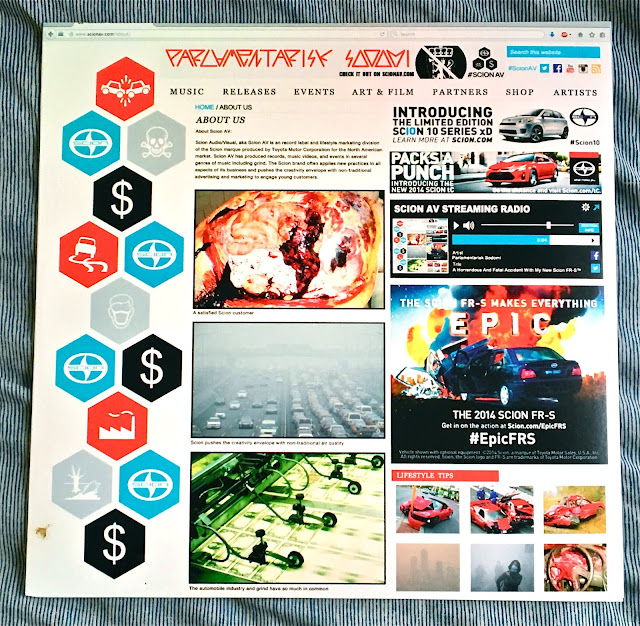 Now all that being said, the Parlamentarisk Sodomi side is probably the part of this release that will have people scratching their heads the most. I remember going in when this was first released, the sound was shockingly different from what I was used to. Gone were the crust soaked, hammer blasting, catchy compositions, in place of a more Psudoku styled space/future grind sound. A year later, it's definitely as extreme and polarizing as it was back then, but I love it a whole lot more. Steinar apparently had many interesting opinions about Scion getting it's cold, industrial mitts into the grindcore world when these pieces were being made. It blatantly and ironically dedicates this whole recording to the importance of merging automobiles in contemporary grind. Har har har. Essentially, this plays out as a cybergrind record through and through. Instrumentation and sonic production that's programmed to play, and sound inhuman. It's very cold, claustrophobic, and does not give you any room to breath. As a rabid consumer of hard-to-take-in music, I love it for that reason. The kick drum and the rapid, ever changing guitar and bass riffs become completely hypnotic at points, and you transcend through the wormhole into the cyber realm. Like the Mahavishnu Orchestra on "Breaking Bad" style blue crack, or Magma performing on a rocket getting sucked through a black hole.
All these recordings were recorded over the course of 2011-2014, a bit of a lull point for Parlamentarisk Sodomi, but just around when Psudoku and Brutal Blues started putting out records. It's easy to see where Steinar's head was at at this time. Especially when listening to the bombastic, almost circus music sounding track "Total Sodomi". Or the ending piece,"Schlammgebert", featuring vocals from Ouchsock Panzer. Which has to be one of the most intense and completely insane songs ever made by this project. It definitely ends this record off with a huge bang! Completely nailing a concept and performing with the most impressive accuracy, Parlamentarisk Sodomi has done it once more. This first came out late in 2016 I believe, in Europe thanks to Grindfather Productions, who released it on cassette. Haunted Hotel Records gave it a well deserved vinyl treatment here in the states and did a superb job. A nice, sturdy double sided insert, and a full color double sided jacket. The vinyl looks and sounds fresh as hell too. I'm obviously hyping this up as an essential record, so if you haven't listened to or bought this yet, you're a fool.