Y'all know I'm pretty generous with the amount of love I spread on here. I use this blog as a way to spread a positive word about things I think should be heard. Writing about something that isn't my taste, or something I genuinely just don't agree with isn't really, and has never been my goal on here. Especially since I choose almost everything I write about, I naturally just gravitate towards the tapes and records I listen to a lot. This post today is a big one, I might get a little sappy but I'm not going to worry about it. This is a release that means a lot to me, and hit me like a ton of bricks when I first heard it. Beggin' For Oxys debut vinyl release, their very elusive 7" EP, "Just Another Tired Ass Powerviolence Record", self released by the band sometime last year in a run of 100 copies. 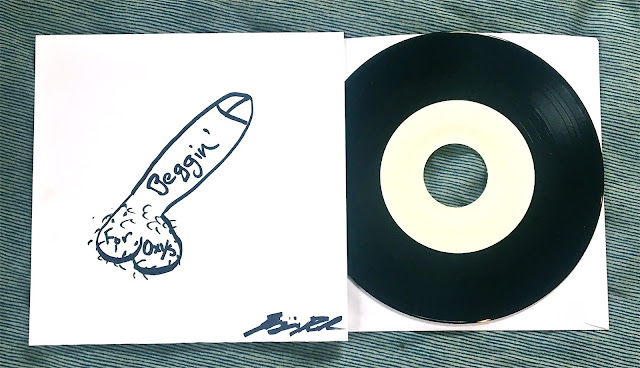 Before continuing, here's a little personal rewind. Last year, my friend Matt who does an excellent noise project called Machine Moon, and I, started to arrange a week long tour for 2018. Fortunately and amazingly enough, Beggin' For Oxys were able to join the caravan. The tour inevitably happened and ended a few weeks ago, and was without a doubt the best tour I've ever been on. It was a real privilege for me to be able to spend time with and see BFO perform for a week straight. Watching their various types of performances was incredible. It didn't matter if Mark's guitar wasn't working that night, and could only do vocals, if they played their planned set or everyone was too drunk to care. They brought the house down every night. When they did perform their songs, it was some of the tightest and hardest shit I'd ever seen. The way they gradually just let the set collapse down into sheer noisecore chaos was executed flawlessly. One of the most exciting and fun bands going right now in my opinion. Mark knows how to write a twisted ass riff, and Aaron is an absolute beast on the drums. 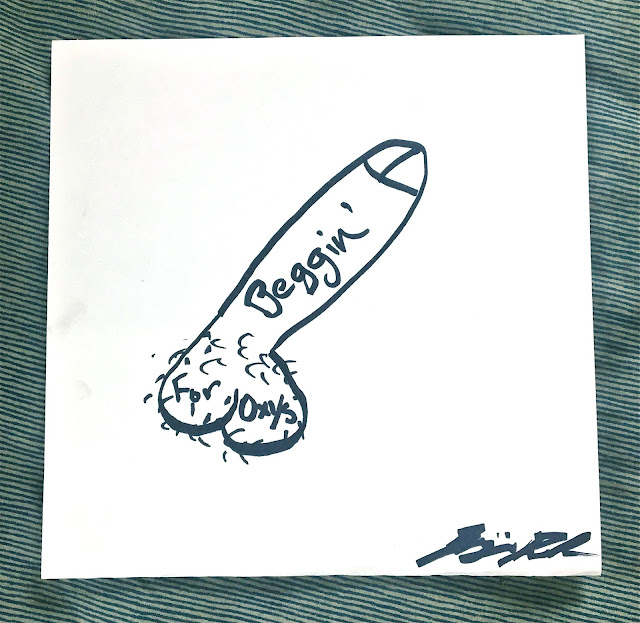 Getting on to the actual record however, this is Beggin' For Oxys when the chaos is much more controlled. Actual riffs and songs as opposed to their noisecore side. The funny as hell title is more or less a good indication of the more focused structure of the songs. Beefy, loud, out of tune guitar riffs and rapidly quick and changing drums. This is like powerviolence performed at it's most cynical, but you're still able to take it seriously. I'm honestly fascinated at how they write their songs; it's a very seamless blend of improvisation and legit composition. The wonkiness of it leads to so many memorable moments. Starting right from the Melvins-esque intro riff to the opener, "Content". Or the nu-metal guitar scronks and grooves on "Overpowered/Underwhelmed" and "Underpowered/Overwhelmed". Like a weird mix of Charles Bronson and Final Exit. Not to mention that this whole record sounds like it wants to literally dig your ribcage out of your body and throw it against a graffiti covered concrete wall. It's a rock solid, pleasurable punch to the face front to back. 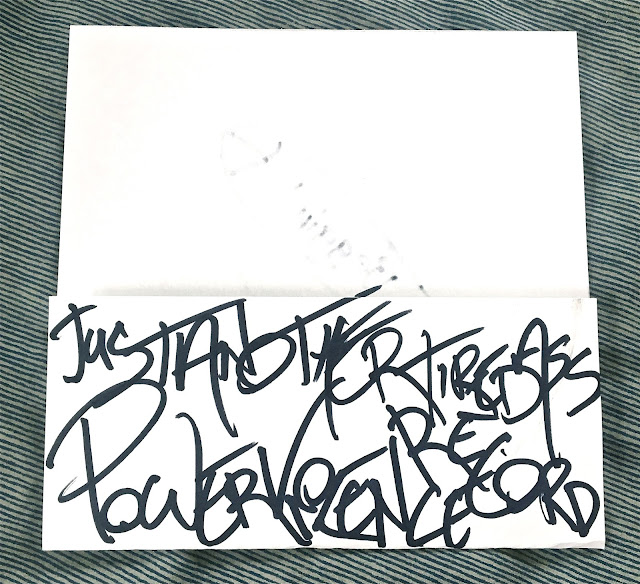 Everything about the packaging was done by the band, and they went and got the record pressed themselves which I really admire. Every cover is unique and hand drawn. They usually seem to stick with the small lettering spread out over the front on this record. However I was lucky enough to grab the cock cover copy that's pictured above. As soon as Mark drew it I needed it  ( edit: cover art by Ben Durham). And yes there are lyrics, you can't stop the sneak dissing. 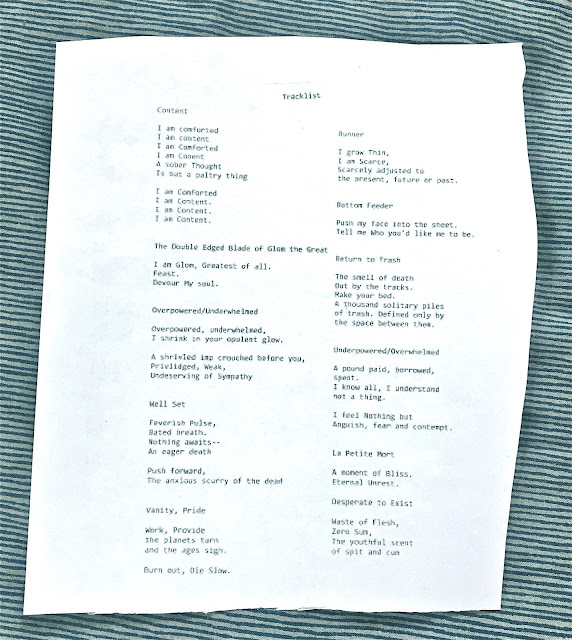 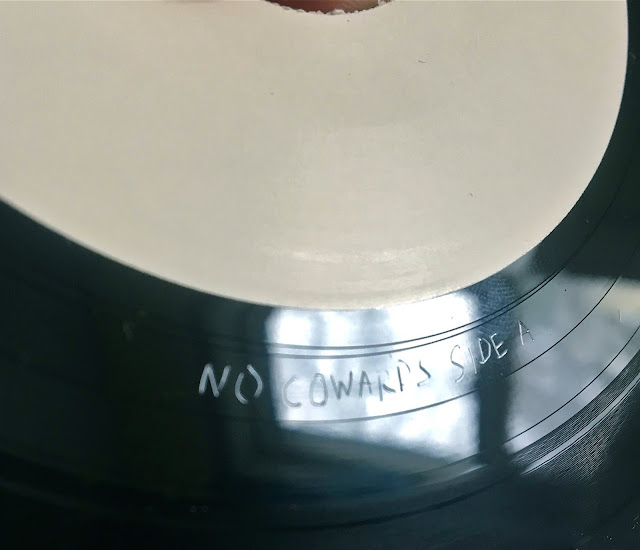 Now in addition to the 7", down here in the USA, Uninvited Records did a slappin' cassette reissue that's also just excellent. As usual, Joe has treated this product with the utmost care. Everything looks and sounds clean, crispy, and is wonderfully assembled. This was released in a run of 40. 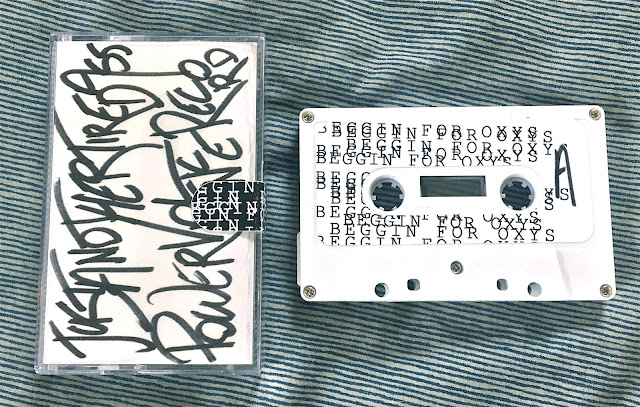 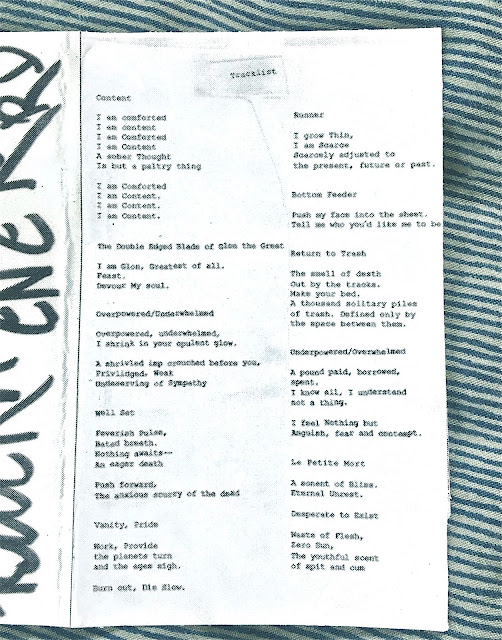 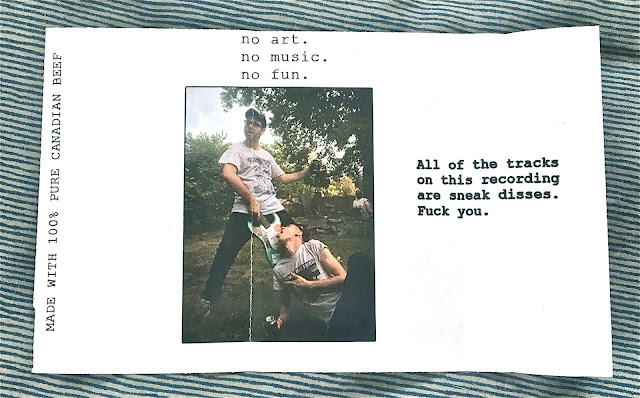 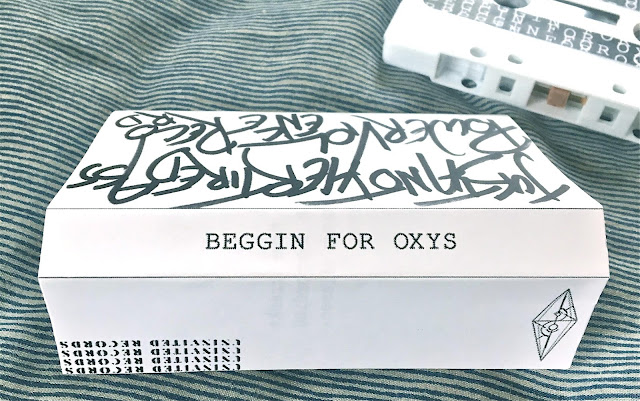 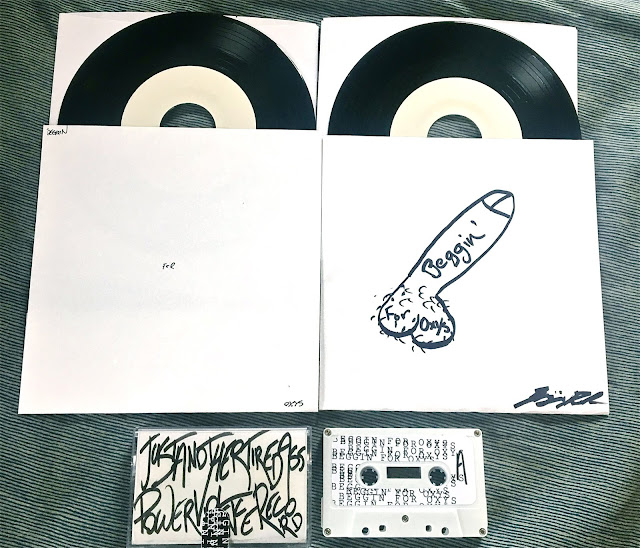 So yeah, I own three copies of this excellent record. I'm not ashamed of this at all.