I was able to chat with my good friend Tommy from Tomb Warden and Brainpan. It was awesome to talk in depth about playing music and the DMV area scene. 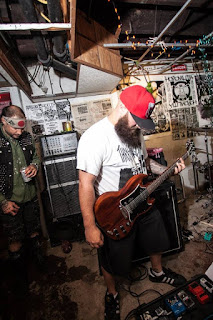 Tyler: Okay so my first question is: How many current projects do you have going now and what do you play in them?

Tommy: I start projects all the time, some would say too often. Currently I have 5 that are practicing to play out/have played out already. The two I play guitar in are Tomb Warden and my newest project Acquisition (name might change). I play bass in Brainpan, Execution Hour, and Secular Media. I've written songs and riffs for 4 other projects that haven't come to pass yet.

Tyler: Did you originally play guitar first or bass?

Tommy: I started on bass when I was 11. I actually have a degree in jazz bass performance

Tommy: Haha Yup. That's what happens when you tell a 17 year old metalhead they need to go to college or they'll never be shit.

Tyler: Has your education been helpful in writing for the bands you are in?

Tommy: Absolutely. I write by myself for the most part and bring ideas in for other people in the band to mess with, so to be able to write down an idea note for note at like 4 AM 5 months ago and pick it up tomorrow and know exactly how to read it is incredibly helpful. Even just learning how to read rhythms helps save a million sick riffs you'd otherwise be too tired/wasted/busy to remember under normal circumstances

Tyler: Do you find writing on bass or guitar easier?

Tommy: Way easier on bass for me. The top two strings on a guitar are totally unnecessary

Tyler: That's interesting. Who was an inspiration for playing bass?
Tommy: Like personal or professional?

Tommy: My uncle Toño in Peru got me started playing bass when I was a kid. He was a drummer, but probably the most influential musician in my life. My mom's family is from Lima and we used to always stay with him and his family. He got this pirated, no name bass in the 70s and must've kept the same strings on it since then. He was huge into prog and made up his own way of notating Rush songs on drums. He also built his own double bass pedal out of a belt and some springs along with other parts of his kit. He was true DIY haha. He passed away while I was in school unfortunately. In terms of "famous" bassists who got me started, I worshipped Steve DiGiorgio from 8th grade until like last year haha. He's still my favorite bassist, but his tone grates on me these days. Other huge influences were Ron Royce from Coroner, Frank Bello from Anthrax, Danny Lilker from Nuclear Assault, Harley Flanagan from the Cro Mags, Darryl Jennifer from Bad Brains, and whoever did bass on the Embrace album. Embarrassed to say even though it's a top 5 album for me I don't know the names of anyone in the band besides Ian Mackaye. Also embarrassed to say that the first bassist I ever noticed when I was 9 or so was Fieldy from KoRn so I guess you can say he's my first influence

Tyler: Sorry to hear about your uncle, that is awesome you had someone in your family to influence you and help you play music I just got made fun of.

Tommy: Thanks man. I don't think I was playing too much grind when he was still around haha. He dug the death metal and thrash I would show him though, soho knows what he would've thought about blastbeats. He probably would've dug them I think

Tyler: If he dug death metal I'd like to believe he would enjoy the stuff you are doing.
Tomb Warden has a pretty strong death metal sound to it, is that something you've always wanted or just how you guys have progressed?

Tommy: That just kind of happened. I originally wanted to have a gulf coast grind style rip off band. I always used to tell people Tomb Warden is my failed attempt at writing PLF songs. I worship the Insect Warfare/Bolt Stein split and have always loved Bolt Thrower since I was a kid collecting Warhammer. Hearing Bolt Stein play Bolt Thrower riffs but still be undeniably grindcore made me want to do it too. I went a step further and found out Bolt Thrower tuned to A standard on Realm of Chaos so naturally I had to also. Also being based around DC with guitar gear experts like Genocide Pact and Ilsa, you can't slack on that. Then after some trial and error plus falling down more than a few gear nerd rabbit holes, people started saying my guitar tone was "amazing" (their words not mine) so I'd write the occasional slower jam to kinda showcase it. Surprise surprise if you slow down metally grindcore it just sounds like death metal. I do kinda have a hard time calling it deathgrind though. Most bands that I associate with that term are too polished and I really don't like the quality. Someone called us "death metal/grindcore, but not deathgrind!" On a flyer once and I dig that
. 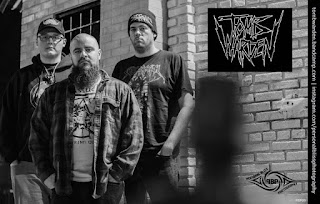 Tyler: I would say death metal/grindcore is vastly different than deathgrind. Or at least I wouldn't assume they are the same thing.

Tommy: I would normally but I've seen enough deathgrind bands call themselves that I don't know who to believe anymore

Tyler: I'd say deathgrind means less than what powerviolence means.
Speaking of powerviolence, do you do a lot of writing with brainpan?

Tommy: I'd say I used to do a little more than 50% when we were still feeling out what our sound was. Now I probably do a little less than half. Rob's been on a roll lately and I think we've hit our stride stylistically. The album is almost 50/50 I think

It shows. It sounds great and some diversity to the songwriting. Is there something you bring to the band that Rob doesnt and vice versa?

Tommy: Appreciate it man! Glad someone with sick taste digs it haha. Rob has said in the past I write confusing riffs but all the weird feeling, ugly ones are his haha. He's rubbed off on me a bit so my newer stuff is getting gross. I'm excited for the new stuff already. Rob feels stuff in a way I just don't know how to. Downside of getting an education in this kinda thing. My mind has to analyze shit and I need to be able to "make sense" of it. He just goes for it and that's really where our sound comes from I think. His little twists on my riffs make us sound like a unit.

Tyler: You work well together cause there is plenty of variety in the songwriting and riffs.
Do you write everything for Tomb Warden?

Tommy: I do yeah. Occasionally Paul has different beats in mind for certain parts and these days they complement the riffs pretty well. I've written 148 songs for Tomb Warden so far, but we've only learned a fraction. Still need to write a ton of lyrics also.

Tommy: Haha Yup. I used to get bored alot and I would write whatever style I would be obsessing about. Brainpan also has like 40 songs we haven't visited yet, but those are far more likely to be fucked with since our style is more defined now
All that being said, I can't say there are 148 bangers. I can confirm at least 10 are garbage

Tyler: At least you can admit it.

Tommy: Oh I've written well over 100 bad songs across all my bands. Unfortunately some were recorded

Tyler: I have a few more questions for the interview. Are there any local bands or people that motivate you to push yourself musically?

Tommy: Totally. In terms of active bands, Ilsa and Genocide Pact are two huge influences, both sonically and musically. Foehammer as well were huge specifically for Tomb Warden trying to get as heavy as I could while still being coherent. DMV grindcore in general has been incredibly welcoming and inspiring. Mind As Prison especially was the band that got me playing grind again and pushed me to start Tomb Warden. In terms of people, my roommate Demir Soyer has been one of my best friends and writing partner since we were 18. He just joined Genocide Pact as their 2nd guitarist. He's also lead guitarist in my band Execution Hour and plays in the ridiculous death metal band Perpetuated along with John and Paul from Tomb Warden. Rob from Brainpan is also a huge inspiration. He's probably sick of hearing it, but his work in Salome was huge for a local kid like me. It's nuts I get to make music with him. Of course there's also Chris Moore. Man's a grindcore superhero

Tyler: You got some heavy hitters in your area for sure. Compared to other areas in the country what do you think the DMV area offers to grind/hardcore/pv/etc that you dont see in other areas?

Tommy: I can't speak too comparatively to other areas, but from what I've experienced, the scene is way more welcoming and kid friendly. All Ages is practically a necessity and we're lucky enough to have the majority of our venues go the extra mile to ensure kids are welcome, even to shows at breweries. There used to be a whole wave of kids starting hardcore bands like every month in DC but that's died down a bit. Luckily we still got some kids starting bands and this time not just in hardcore. Needle is great example. Their drummer just turned 18 while on tour with Tomb Warden and I think you'll agree he kills it live.

Tyler: Needle was a pleasant surprise and their drummer crushes. Its cool that there is a scene that does have a youth focus cause it seems the opposite in most places. Okay so last question: anyone you wanna shout out?

Tommy: Shout out to my parents who've been putting up with my bands (good and bad) practicing in their basement since I was in 7th grade. Props for not backing down when I bought real amps haha. Also shout out to anyone who supports good, local bands. Emphasis on good haha

Tyler: Thank you very much for answering my questions, this came out great.

Tommy: Thanks for the interview man it was fun! Hope I don't sound like an asshole at any point haha, Or at least the wrong kind of asshole

Tomb Warden and Brainpan both put out releases very recently that are killer. Check them out below!