A Stream Of Random Events

A new post; a new return; a new set of starkly designed sheets as a background. There have been so many releases I need to talk about that have come out this year, and trying to catch up and get to them all would be too much of an ambitious undertaking for me at this point. But I figure I should highlight some of the real standouts of 2016 as much as I can. It's always these odd-numbered years that generally have good music being pumped out in the truckloads. Ironically, these sad, confusing times have only gotten much worse as of late, and for me I'm taking more and more solace in my days of collected angry music.
One of the best tapes of the year came out this summer under the trustworthy production of the Smash Music and Follow Me Into The Laser Eye labels. The epic 4-way split with Limbs Pin, Penis Geyser, OPS-PSF and Parasite Social. Limited to 100 copies. 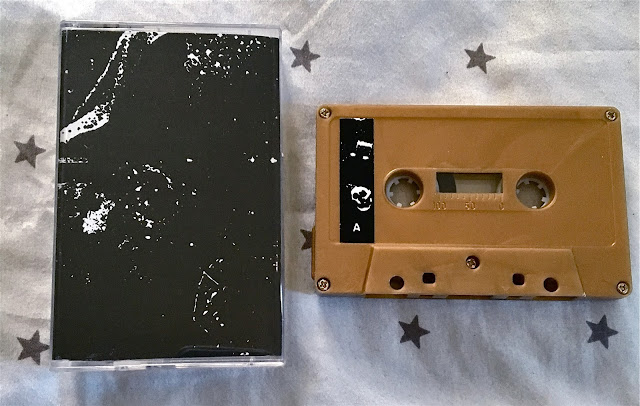 The A-side kicks off with the spastic majesty of OPS-PSF. A cult noisecore band from Japan that a lot more people should know about, especially since their recent resurgence of activity. Definitely a must listen band for anyone into unhinged/cut-up noisecore. "104 Storys of Fake Adventure" is a mind-shifting, relentless collage of sounds. Some sort of movie trailer sample introduces the track, with only a few seconds of jarring, guitar and drum stabs coming in from time to time. As the piece goes on into about the 2 minute mark, it's blast off time, and OPS-PSF create a beautiful, chaotic explosion. Muddy, distorted, z-tuned guitars, clean jazz chords, stick clicks, cymbal hits, a kick drum or two; scronks, squeals, screams, all going by at the speed of light. Magnificent!!!! Limbs Bin proceeds immediately after with one of the harshest recordings the project has ever done. The usual drum machine bursts are almost completely buried under searing distortion walls and some of the hottest microphone distortion I've heard of tape all year. Everything here from the vocals to the instrumentation is manipulated and drenched in so much sonic sewage. At the same time, the textural pops and crackles that spew from all the distortion and the mastering make this track as captivating to hear as it is painful on the ear drums. Wonderful!! 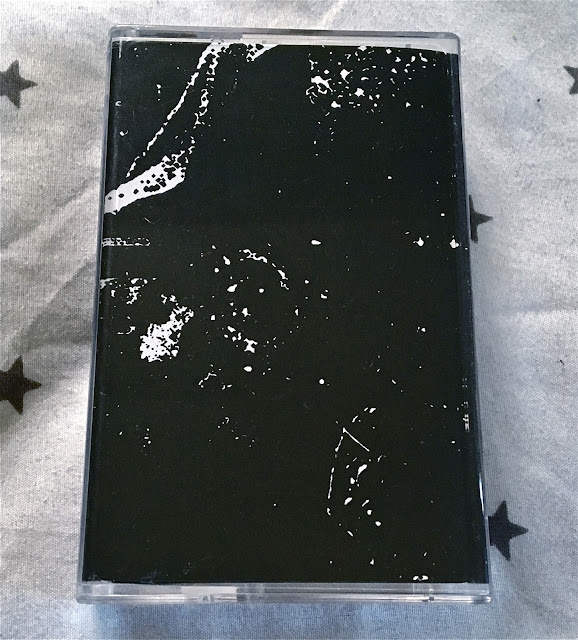 The B-side opens with Parasite Social, a new band to my ears, and honestly their contribution is the least exciting part of this tape for me. Pretty standard and by the books grind/noisecore, almost bordering on gorenoise from the gutteral vocals and bass heavy, riffless guitars. The short bursts of songs come and go in a pretty linear, suitable way. It's not terrible by any means, but it lacks the distinguishable characteristics that all of the other three bands possess. Which leads us right into Penis Geyser, truly one of the USA's strongest examples of genuine noisecore garbage. And I say that with all of the best intentions. It sounds like it was recorded on a broken cassette walkman in a basement with one hanging lightbulb dangling from the a mold covered ceiling, and I love it. The tension and unpredictability of a Penis Geyser performance shines through here. You're never really sure what kind of attack you're going to get, or how long until the drums finally decide to come back and lead the band into "go time", or for how long that will even last. But I desperatly wait in anticipation for the next blast. Free music of some of the highest caliber and dedication. 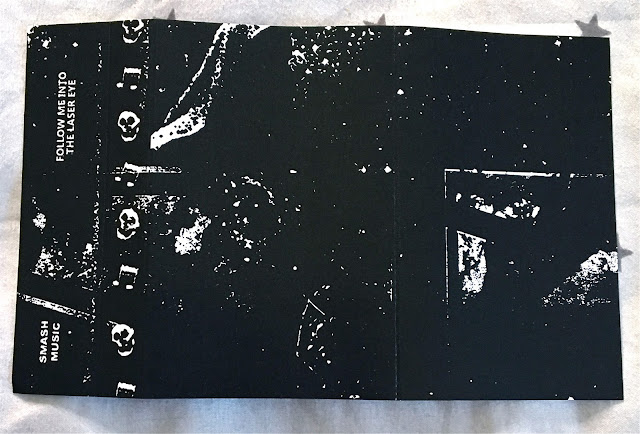 The stark collage work of Alex York that covers the Jcard is interesting. I feel like I have to look very deep into it to see the real picture. It's a very wonderful presentation, I love that trademark Smash Music spine design. The tape is also dubbed very very well, everything sounds as loud and intense as it should. 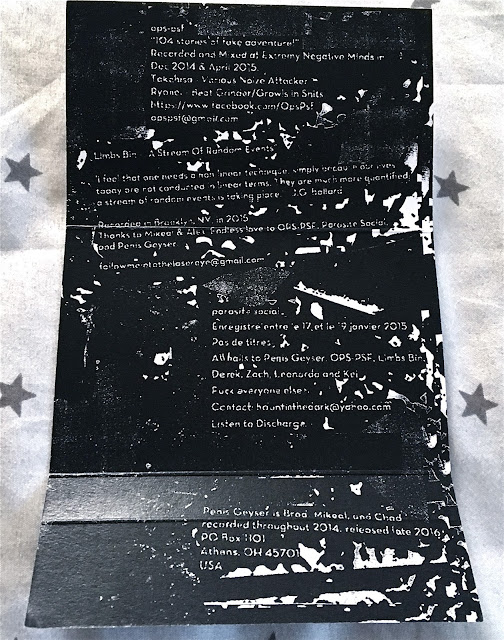 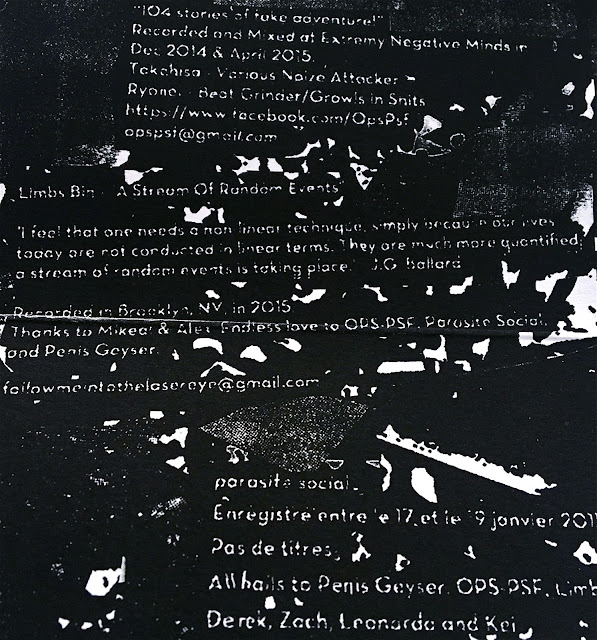 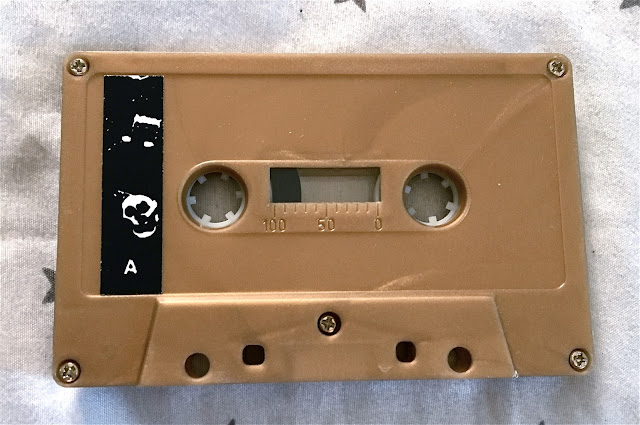 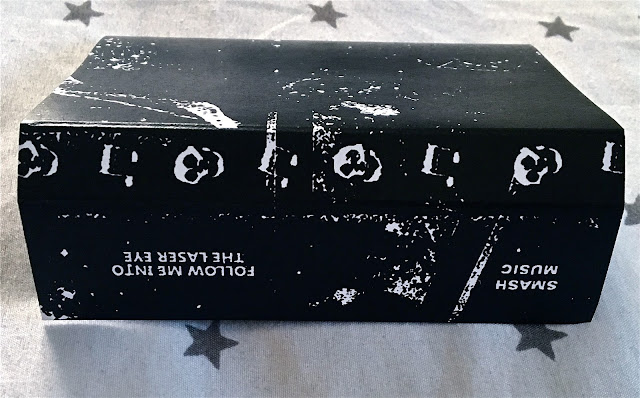 I say this is definitely one of the mandatory harsh noise/noisecore releases of the year. Spend your money wisely and buy this HERE and HERE!