I'm actually going to be heading up into Canada for the next couple of days on tour! My first time ever in the country I feel a lot of kinship to. So allow me to bring a belated finish to Mince Month with the final new Archagathus split 7" I bought, this excellent split slab with Soil Of Ignorance! Black vinyl, 33 RPM. 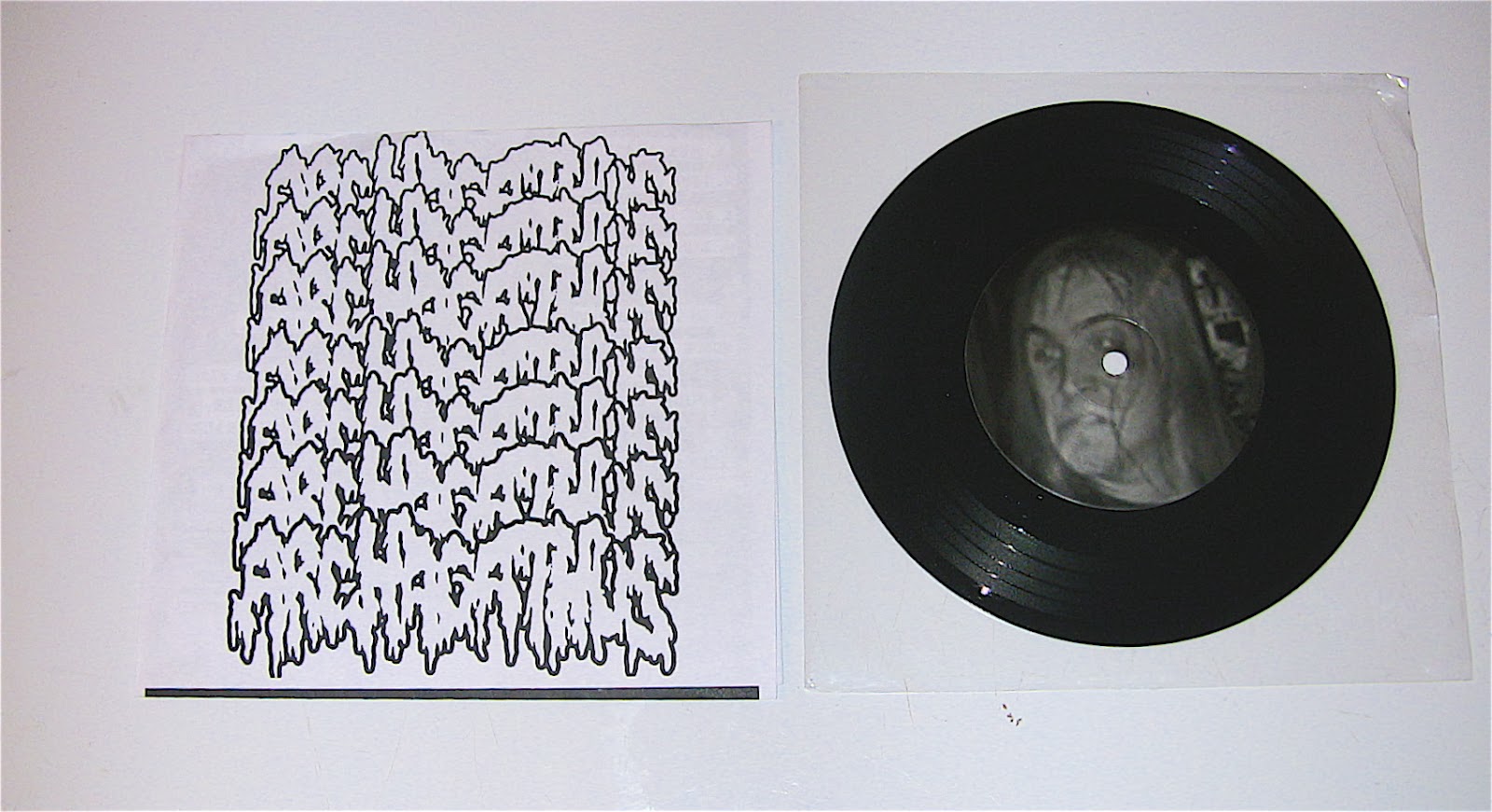 It seems like this split was supposed to come out a longggg time ago. Archx's recordings come from 2010, whien it was still essentially just Dan. Great stuff and terrific recordings on there side. Along the line's of "Canadian Horse" recording quality. Opening up with one familiar track, "Hey Agathocles", and a couple I guess unreleased songs. "Religious Ignoramus" and "Life If Just Once" (a quick Discogs search told me so). Great stuff all around, more of the same instantly lovable grind I except from Archagathus. 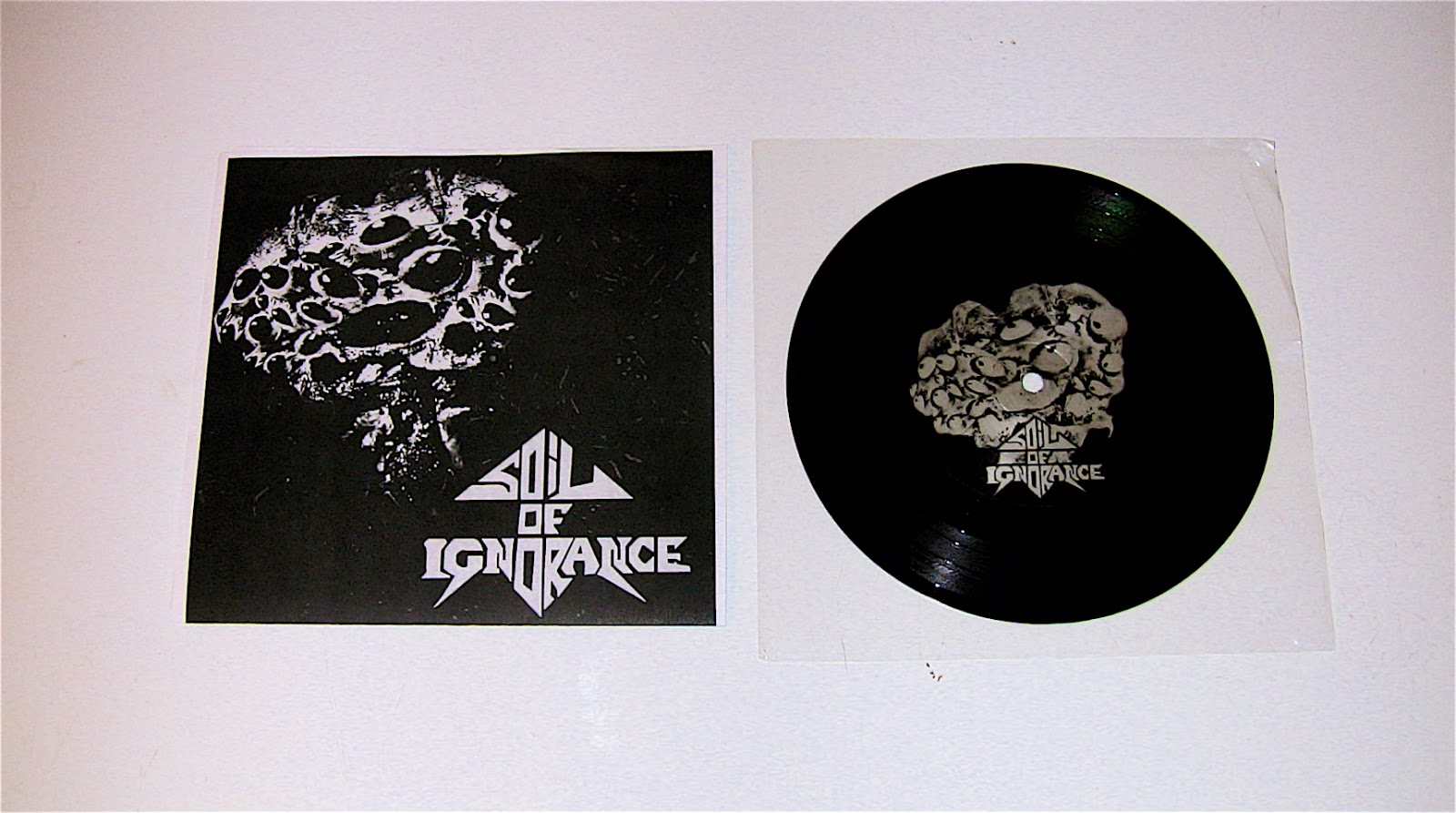 Soil Of Ignorance are a band who's records/tapes I've seen floating around in various distro's for years. And goddamn if I'm kicking myself for not checking into them sooner. These recordings come from '09, so not too sure what they sound like now, but these 3 tracks dished out some unexpectedly heavy and brutal grind. Thick walls of distorted bass and guitar, chunky tones, and commandingly loud drums. I guess I was expecting something more thrash metal sounding due to the look of their logo.
Consider me a fan now. 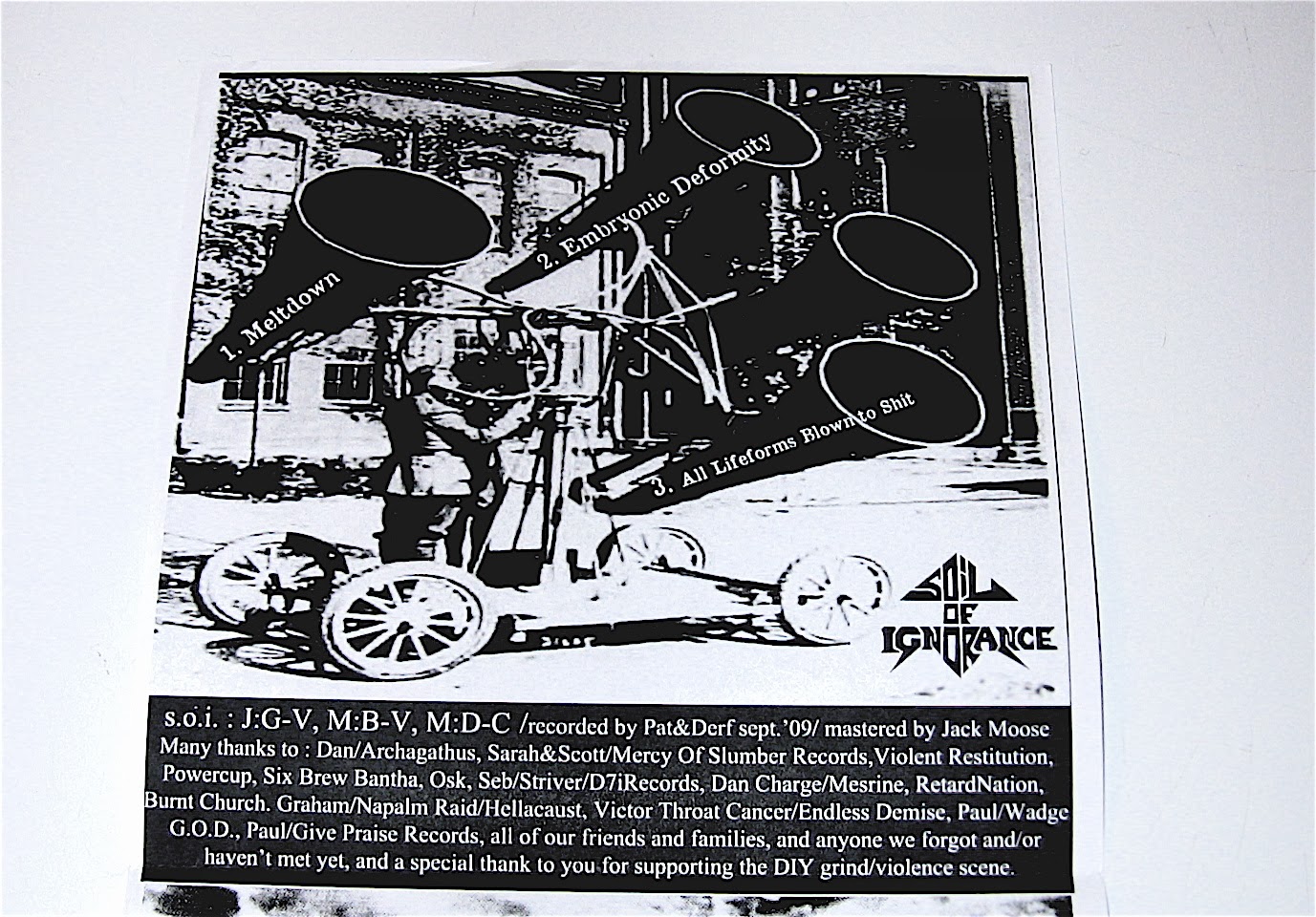 We got another printer-paper cover like the Violent Gorge split. Complaining is pointless haha. 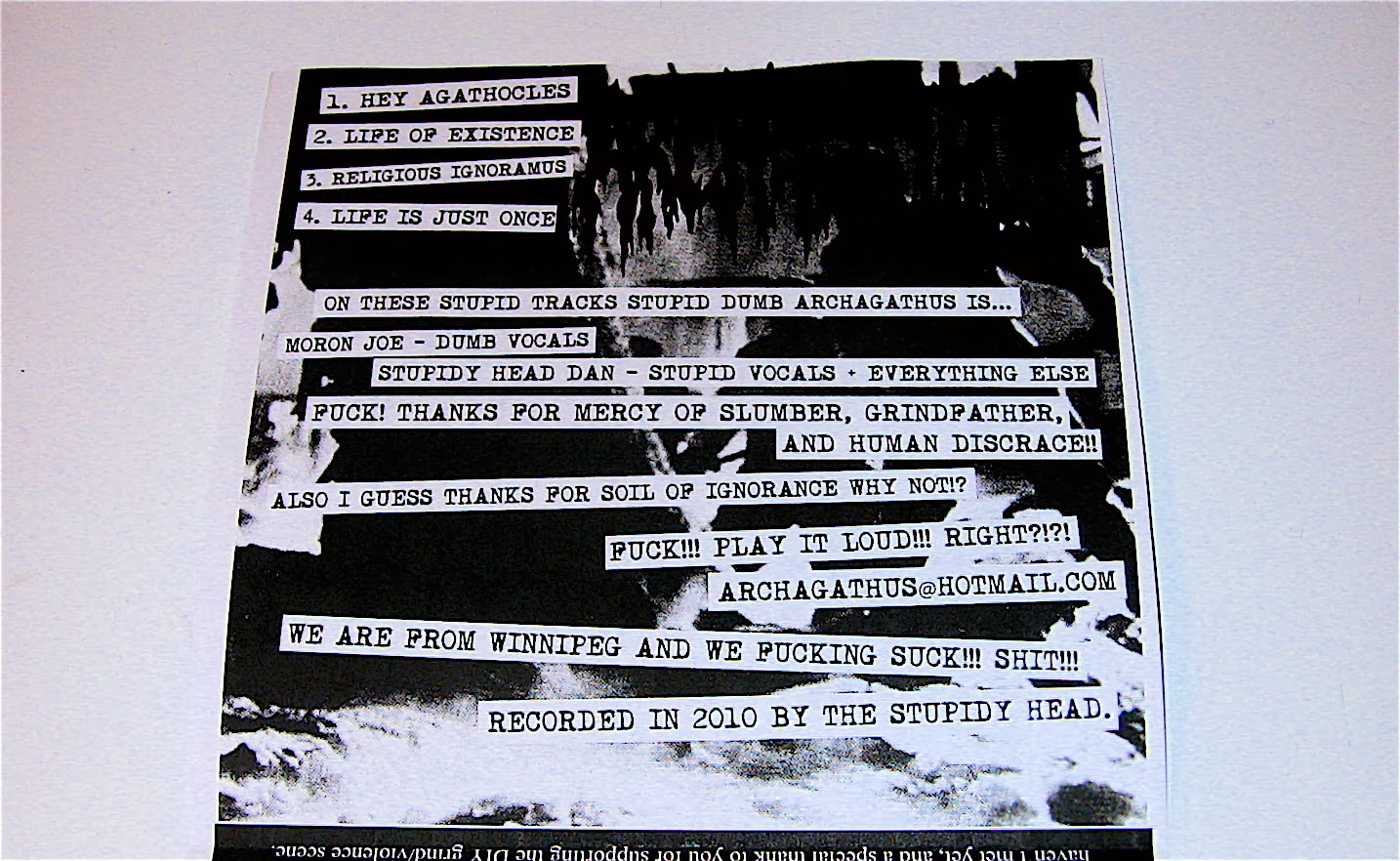 Been off the grid for a minute. The winter has weighed heavy on the soul this year. I'm sure my fellow East Coasters can relate to my woe's from this oppressive winter we've been dealing with. While my spirits are temporarily high, how about a quick post about one of my favorite records ever. The powerviolence wrecking ball of "Trapped Inside" by Lack of Interest. Black vinyl, 45 RPM. SLAP A HAM! 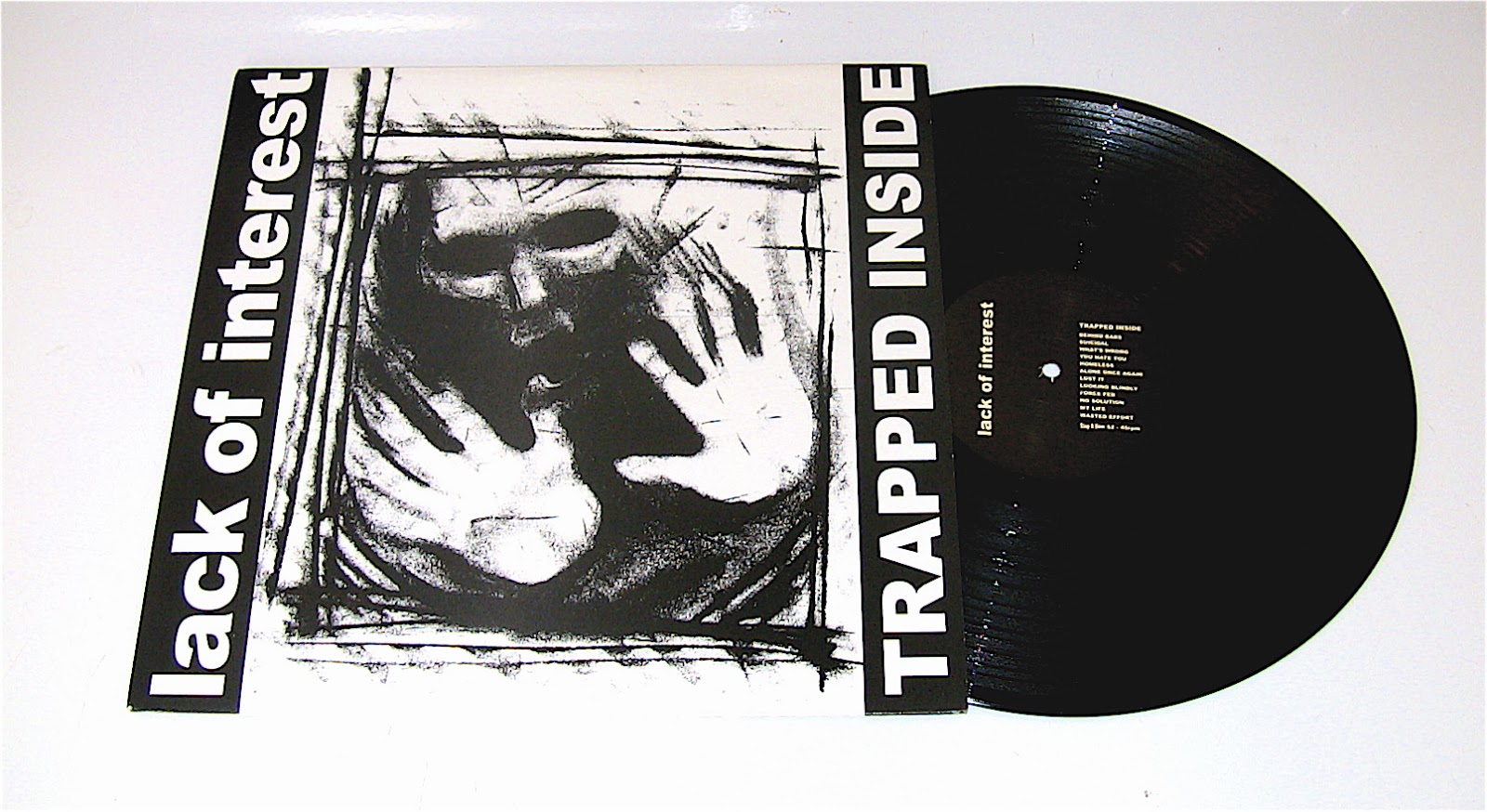 Out of all the bands from the Golden Age of powerviolence from the West Coast., Lack of Interest, along with MITB, have been my favorite bands from that collective. Lack Of Interest are a band that have delivered great material every record they've been on, to me. Sadly, they kinda seem to be one of the most overlooked out of the bunch. Though the excellence of this incredible debut full length can not be denied. I will admit that this band during this area seems to be a bit of an acquired taste. The recording might irk people at first (it bothered me to, honestly), and I've had a lot of discussions where the vocals came up in a negative way. Though after everything finally clicked, to me this is became some of the most incredible powerviolence ever recorded in the 90's. On par with "Downsided". 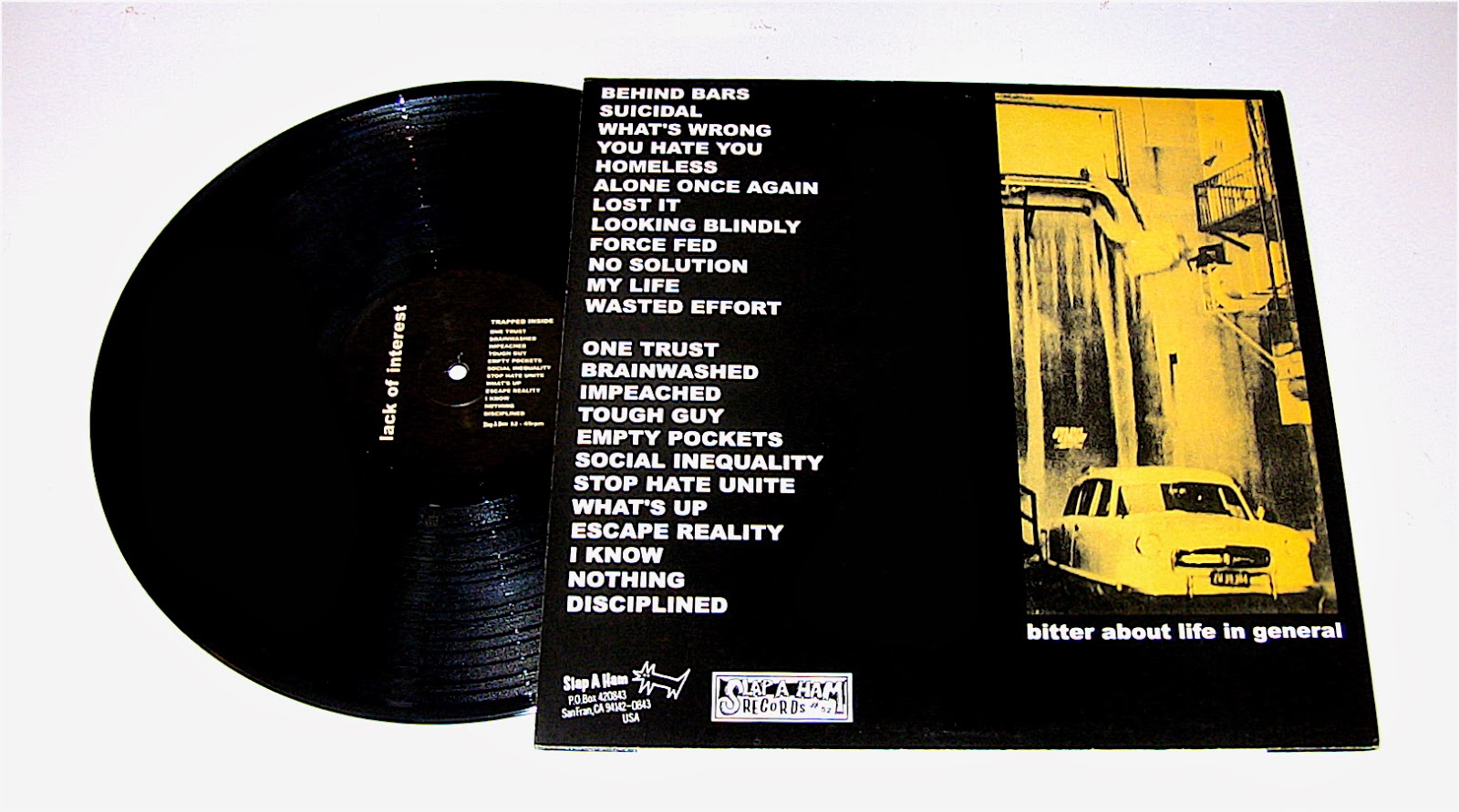 Lack of Interest's songwriting was always a little more technical and jagged. Lots of sudden stops and starts, tight transitions and tempo changes, all given in a raw, desperate delivery. This, along with the previously mentioned "Downsided" and No Comment are the kinds of things more current groups like Sidetracked and xBrainiax worship. Super grim presentation. Creepy cover art, claustrophobic boarders, "Bitter about life in general". Everything about this band is pure hate, misanthropy, darkness and masochism. It's intense. This record also contains one of my favorite powerviolence songs,  the incredible "My Life". One of the best under 1-minute song ever, Period. 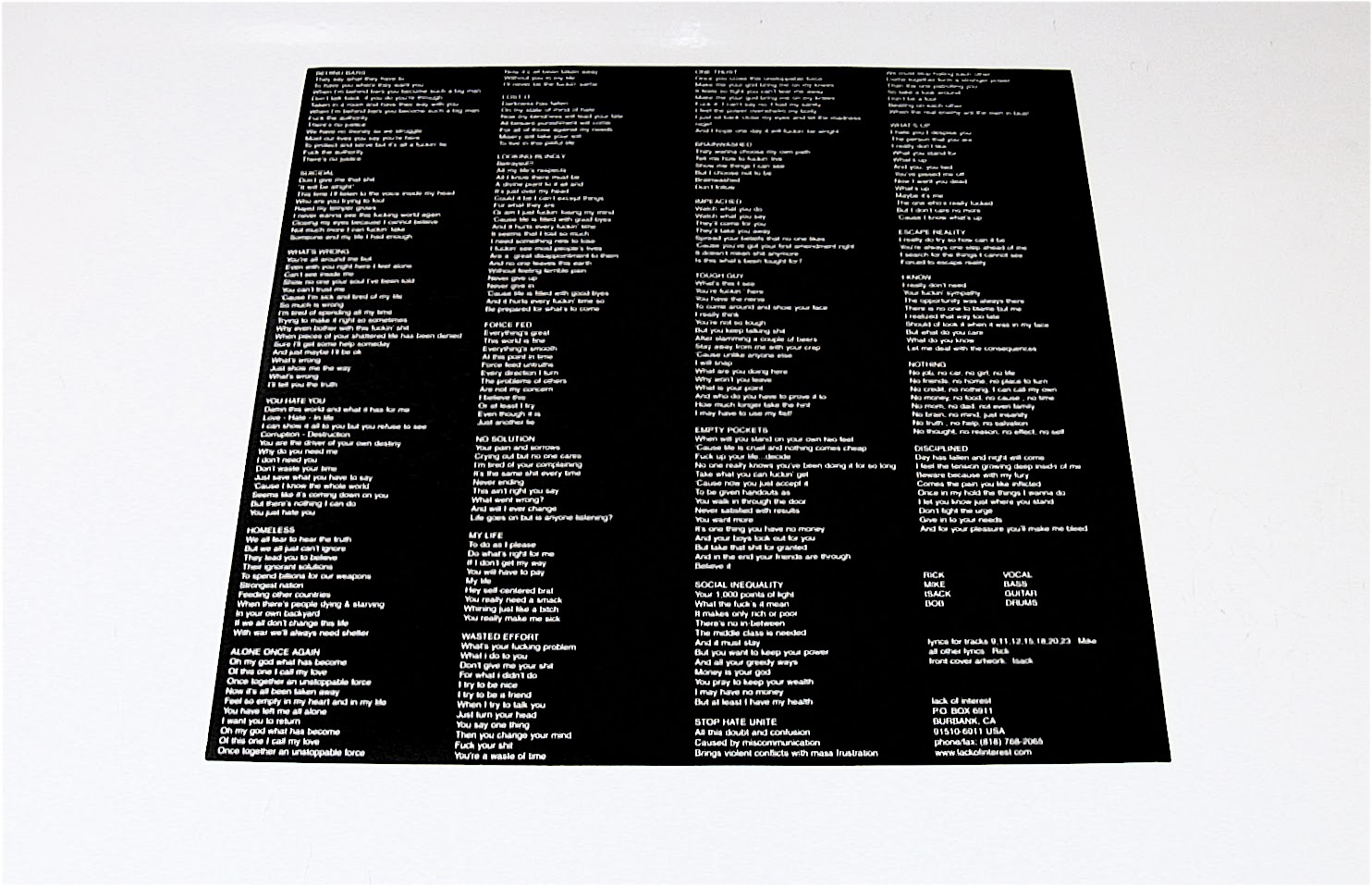