I'm not normally a fan of "compilation" releases, especially when I have all the records where the tracks originally came from. That being said, it is pretty great to have all the songs on one convenient release, and including some unreleased jams is always a nice bonus. Case in point; The Afternoon Gentlemen - "Power Joogle Poggle Violence" 10", transparent blue vinyl, 45 RPM. 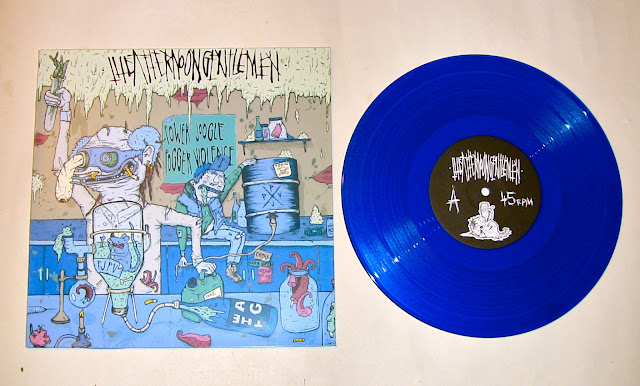 Most people should be familiar with this band already. They really broke out of obscurity in 2011 with a slew of excellent releases, including splits with Cyborg and Chiens, which is where a majority of the tracks on here come from. Great, tight, very precise grindviolence with a ton of excellent stop/start riffs and great song writting. Great recordings all around too, this band doesn't fuck around. The unreleased tracks are a great inclusion, gives this release that extra bit of "gotta have it"-ness. 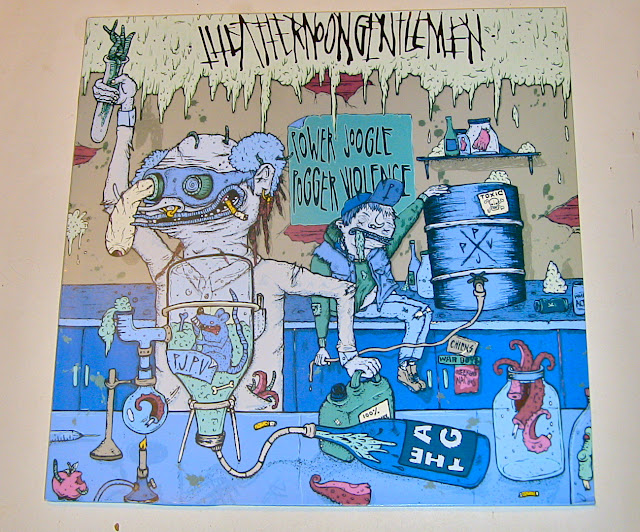 Beautiful art and packaging on this too. Everything is very colorful and tidy. 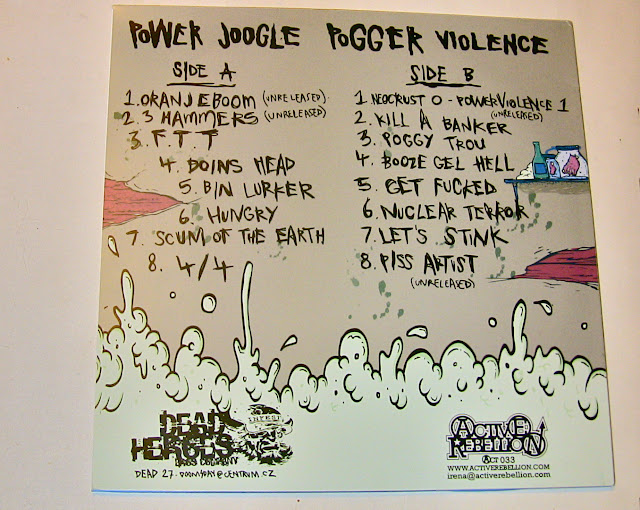 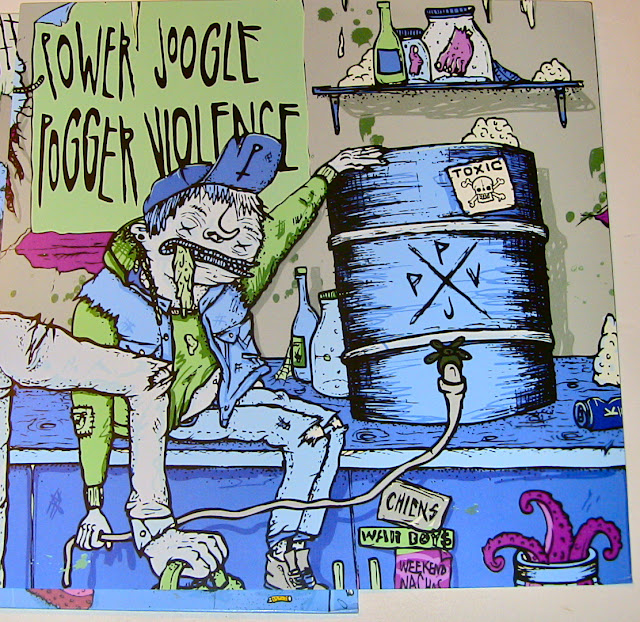 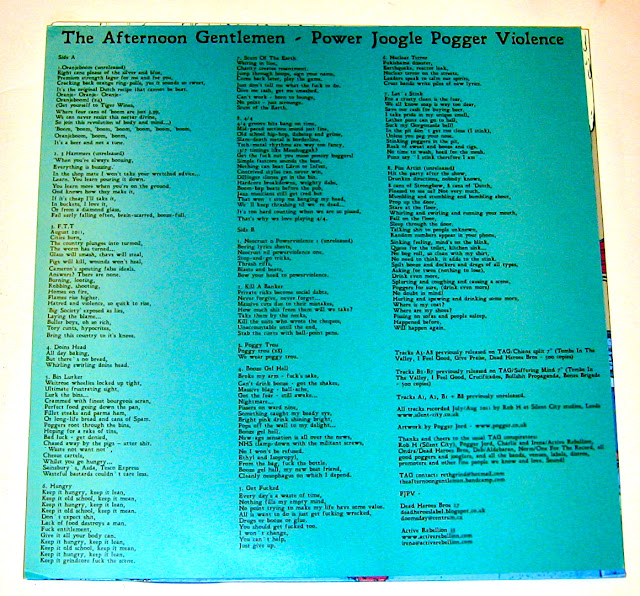 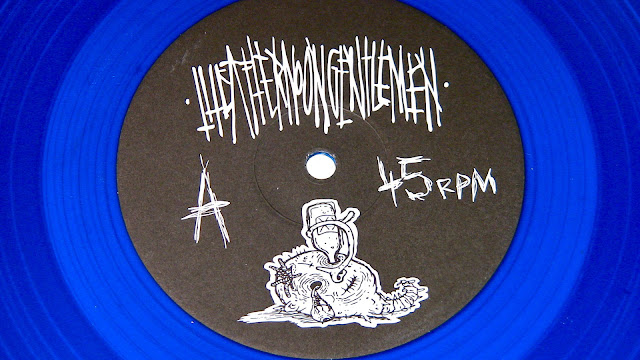 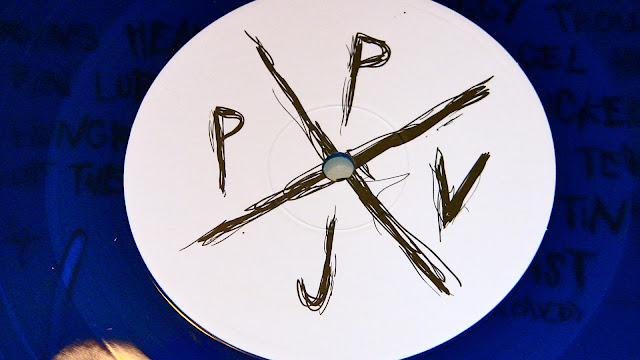 I believe a couple more splits are in the works, very excited to hear what this band does next.

My Own Two Feet

Thanks to a recent trade with my buddy Paul, I have finally completed my Extortion discography collection. Of course, I don't have every variant, my wallet can't afford to take it. I might buy another variant of some record here and there, if the price is right, but I don't really see the point. Beside's that, here was the last piece I needed, the 7" repress of their demo. Black vinyl, 45 RPM. 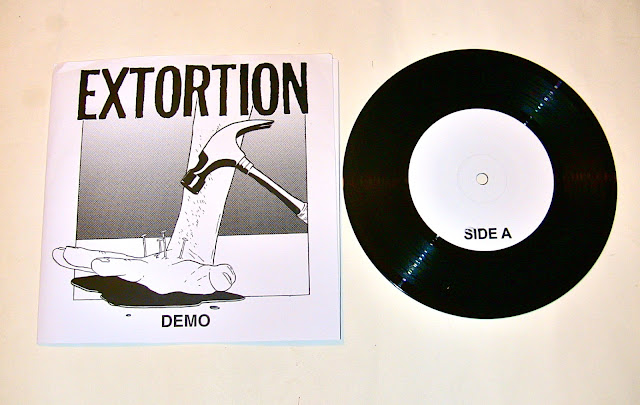 Definitely not my favorite stuff from the band. I definitely don't see myself pulling this out very often, but it is mandatory for anyone who's hungry for their records, like I am. Super aggressive, pissed off, fast hardcore, just like we know and love from Extortion. Except that the recording on this is raw and lo-fi as balls. 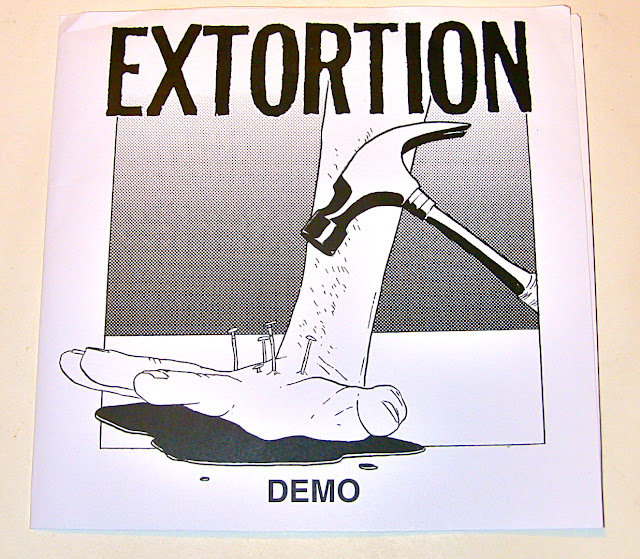 Very simple, bare bones, and crude packagine. Basically just a printed image on some regular printer paper that was then folded. Hey, what ever does the job. Love the artwork on this too. 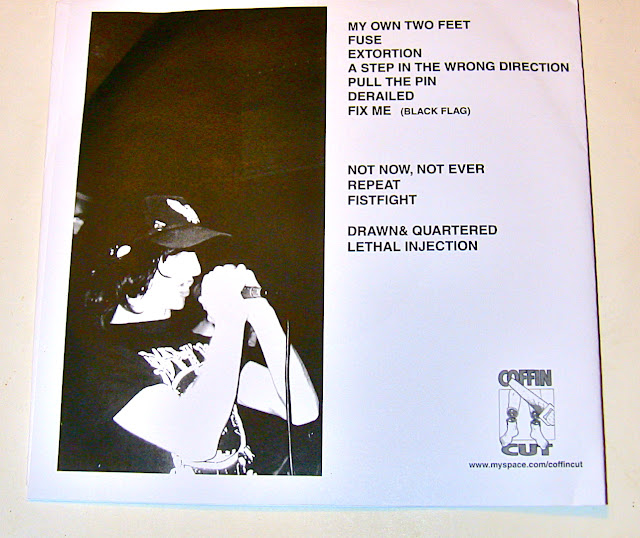 Now, apparently there is a recently released live bootleg LP that was just released, which I should be getting soon. I really don't like live records, but fuck all, I got to stay complete. For better or for worse :p Bring on the splits with ANb, Hatred Surge and Sidetracked!! 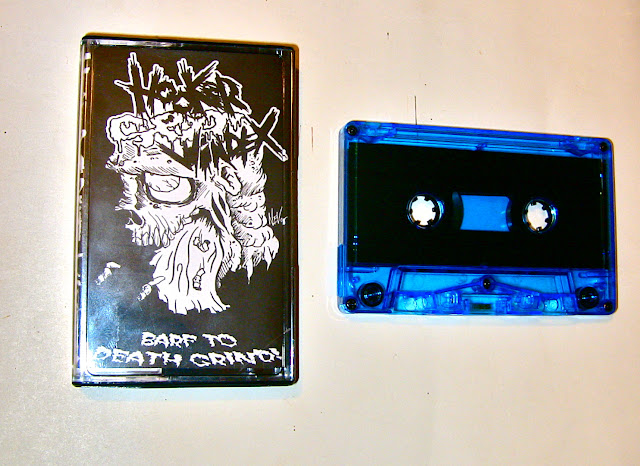 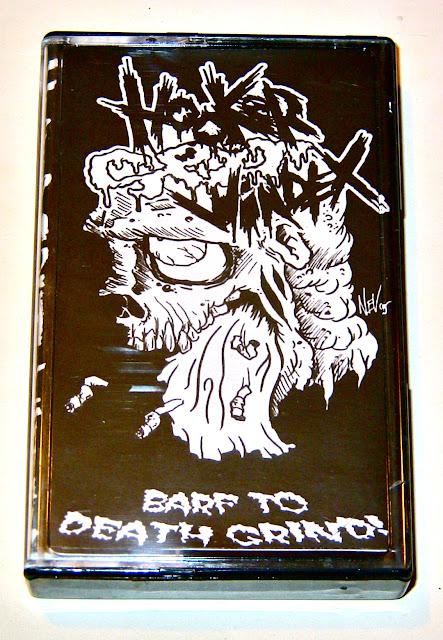 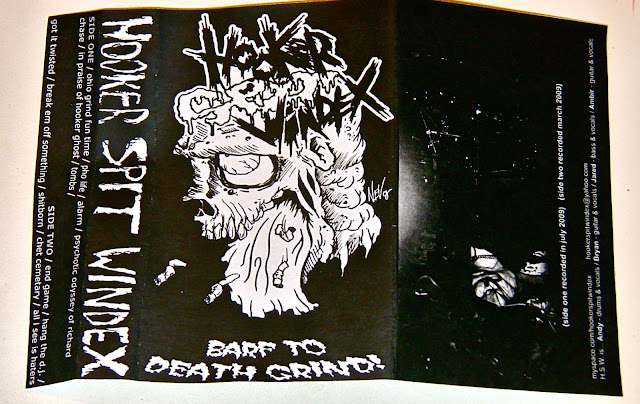 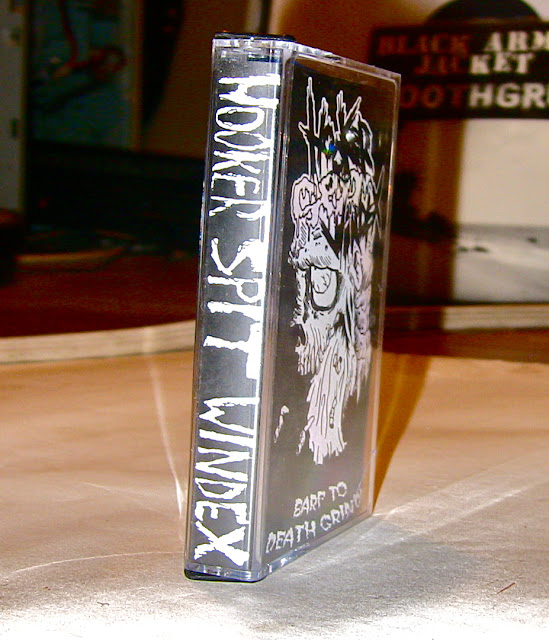 The postage increase that was put into action last week can suck my left one. Eight bucks to ship one 7"? Fall in a hole and die. So yeah, I don't buy overseas very much, but I do make certain exceptions. One of them being Yacøpsæ, who recently had their first 7", "Krank Ist Normal" reissued. Red/black swirl vinyl, limited to 100, 33 RPM. 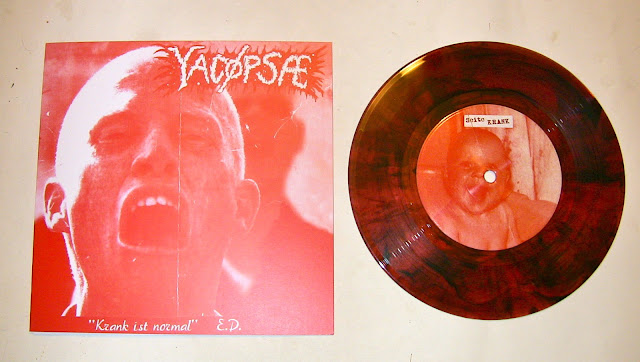 I'm really not a fan of how the original recording of this record sounds. It's all very flat and not-pummling. So thankfully, Yacøpsæ had the brilliant idea to re-record the entire record, with "Tanz Gronsy Tanz" quality production. The record sounds fantastic, and it looks fantastic. And yes, they did keep the Cure cover, it's wonderful. 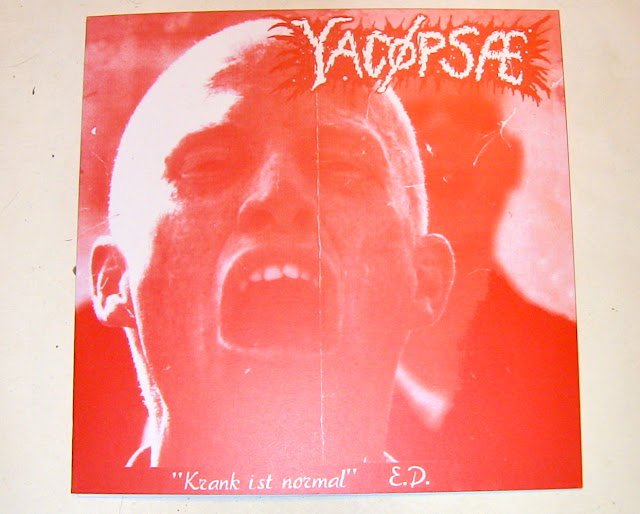 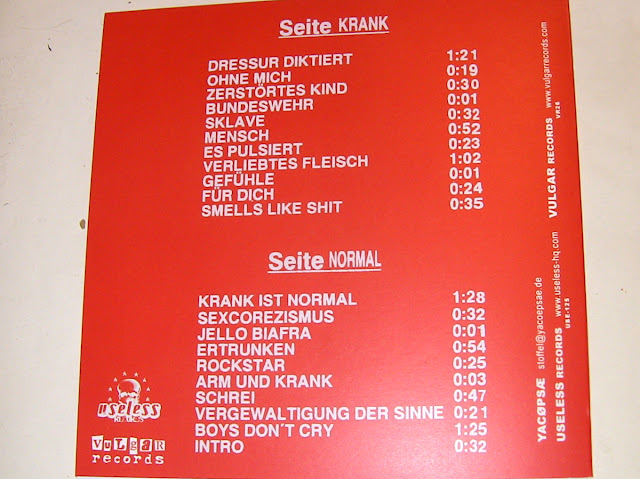 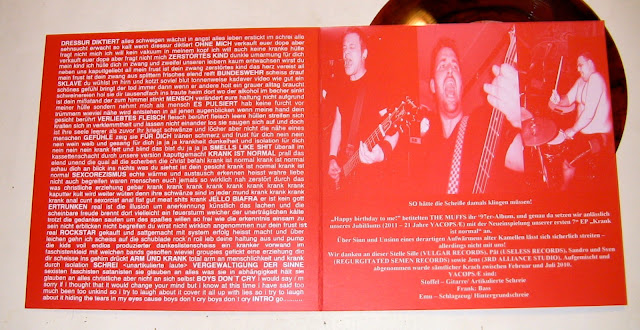 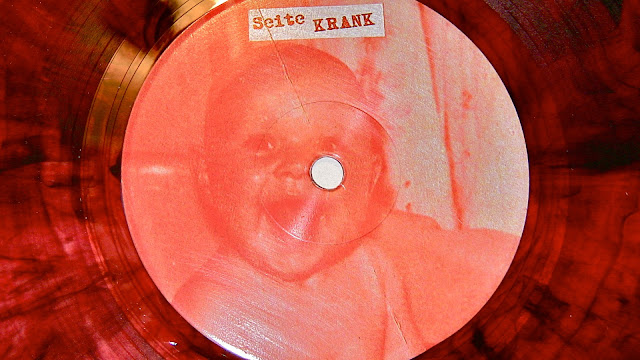 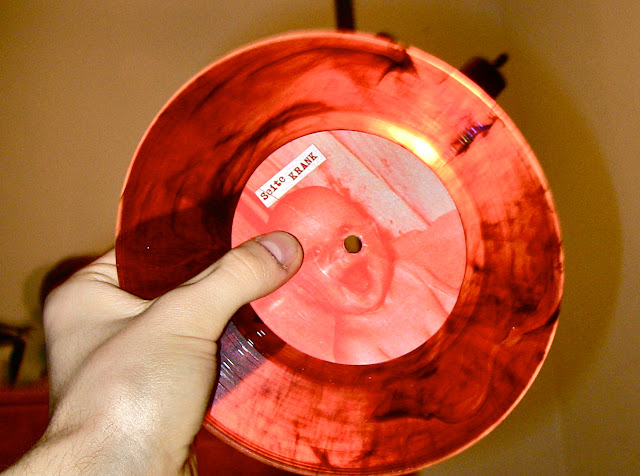 This should probably be coming over to the USA soon, so local peeps should wait a bit. Or if you're impatient or want the color version, hit up Vulgar Records.