I've been going through my cassettes a lot these days. Re-listening to tons of old favorites, catching up on some I haven't listened to yet (it happens). There have always been a large handful of tapes that I consider to be treasures. Not only because of the quality music, but with the sentimental value behind them as well. This baby right here checks off in both of those categories. This is the "Fuck The Lungs" compilation/4-way split between Pizza Hi Five, Godeater, Sloven and Nothing Is Over. Hand numbered out of 200 copies, released on Feelgoodgrind Tapes. 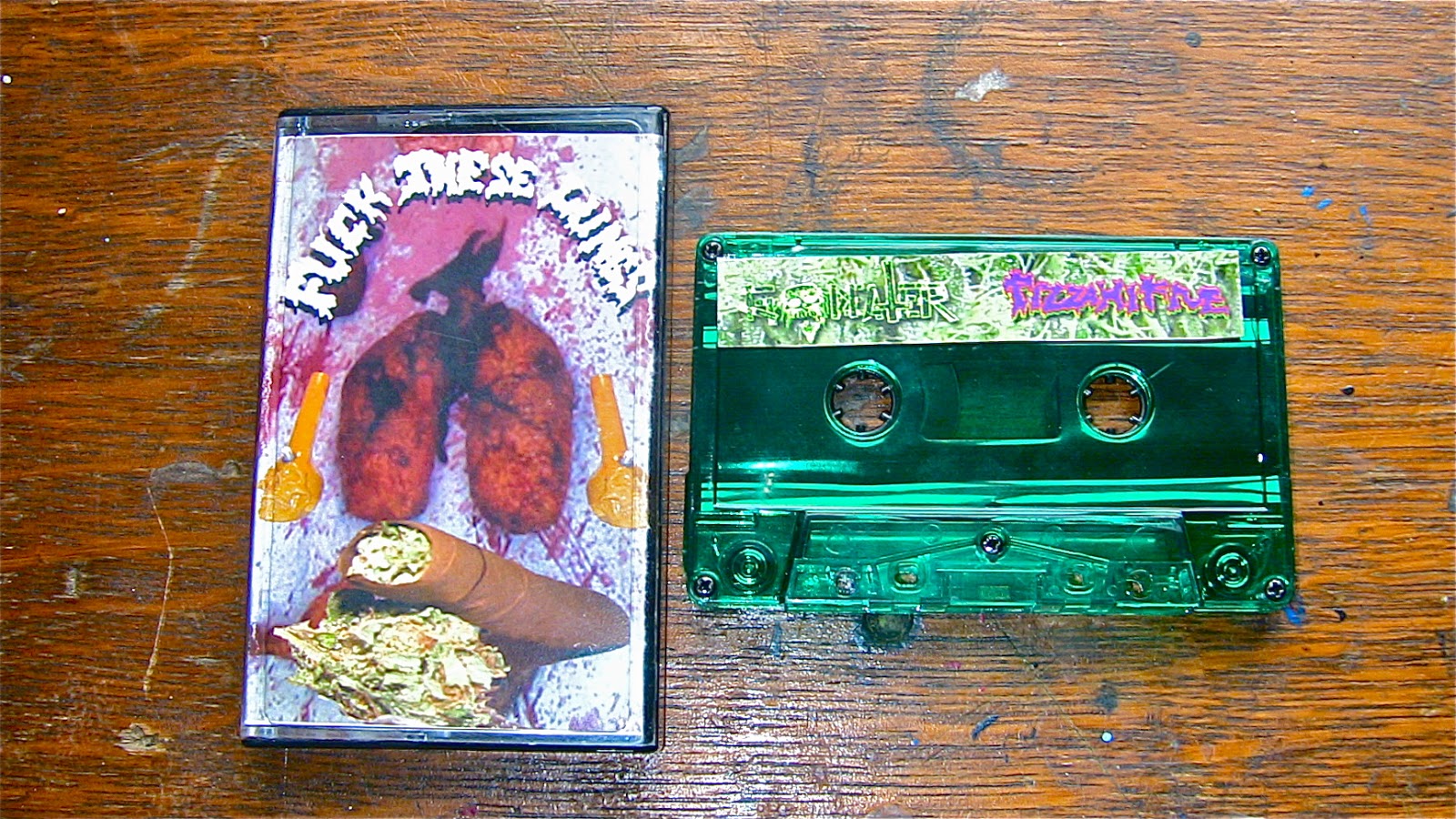 Back several years ago, I was in contact with this guy Bryan, the guitar player and vocalist for Hooker Spit Windex. An Ohio unit who were actually my first true favorite "underground grindcore" band. I bought plenty of HSW tapes from him, and he was always cool enough to throw in a few choice freebies. For a small dork child like me, I always thought that was always the coolest thing.
One of these freebies was this gnarly looking tape, displaying what at first glance I thought were sackless testicles. And it had bands called Pizza Hi Five and Godeater on it. It was nuts, and strange, and didn't make a whole lot of sense to me. My knoweldge of grind at this time went as far as Napalm Death's - "Scum" record, and whatever Relapse was putting out. My brain was fried when I played it the first few times. This kind of grind was completely new and foreign. It was raw, visceral, nasty, unpolished. Complete blown out insanity and noise was is the name of the game here. Which of course is something we're all used to now, but for me back then it was unlike anything else. 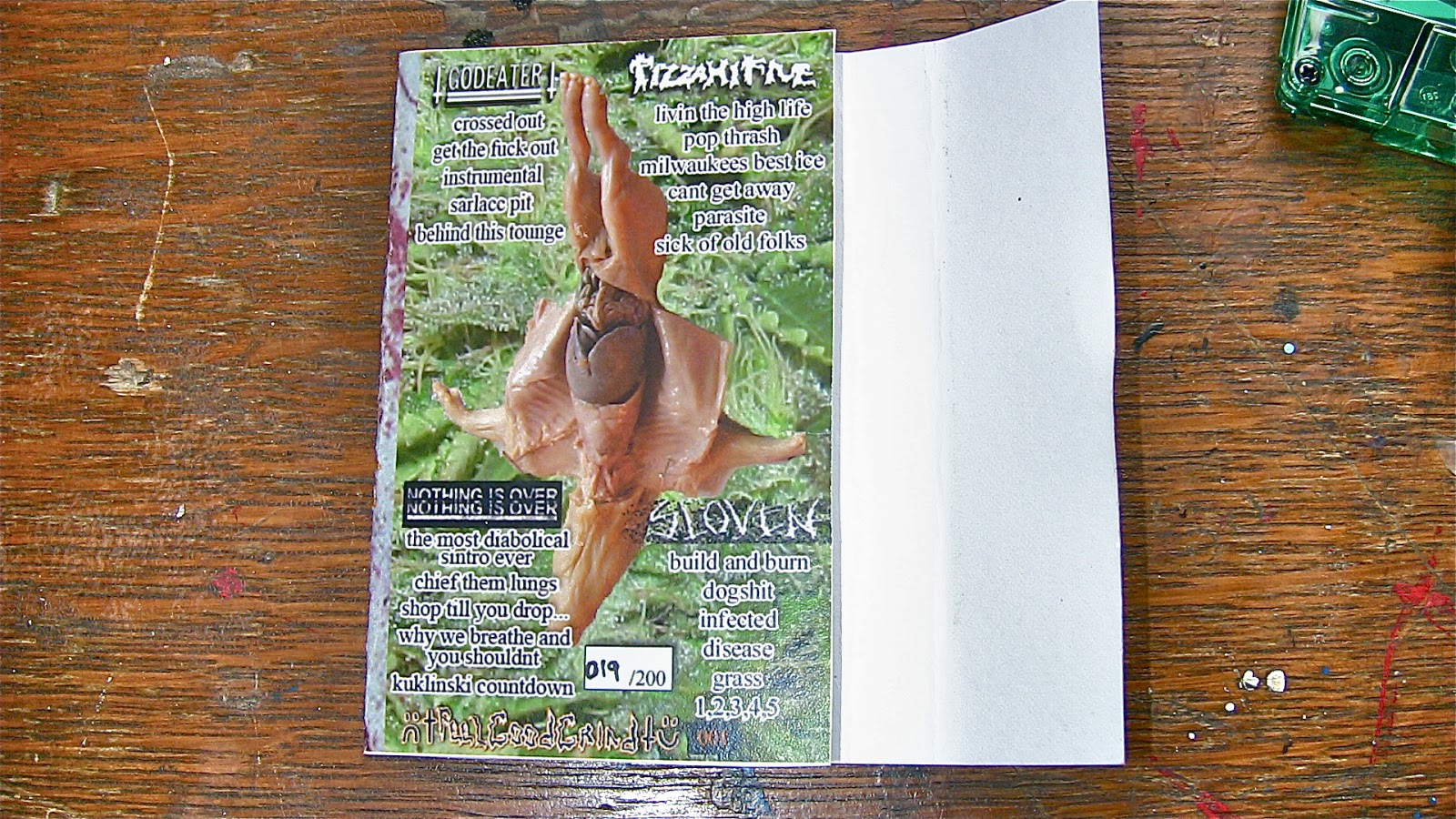 I can probably just say that this is an all mid-west bands split, and a portion of readers will be instantly pumped. We all recognize Pizza Hi Five, and even back then there tracks stuck out to me as being the strongest of the bunch. This band has done no wrong in my book, I think they're fantastic. Godeater was a good pairing on their side. Their side is so blown out and out of control, complete powerviolence mayhem. Nothing is Over is some pretty alright hardcore with blastbeats. They did a split with Apt. 213 a few years ago that I need to re-listen too. Sloven is actually a pretty kick ass fastcore band in the same vein of Lack Of Interest. I don't know if they did anything else after this, I certainly hope so. 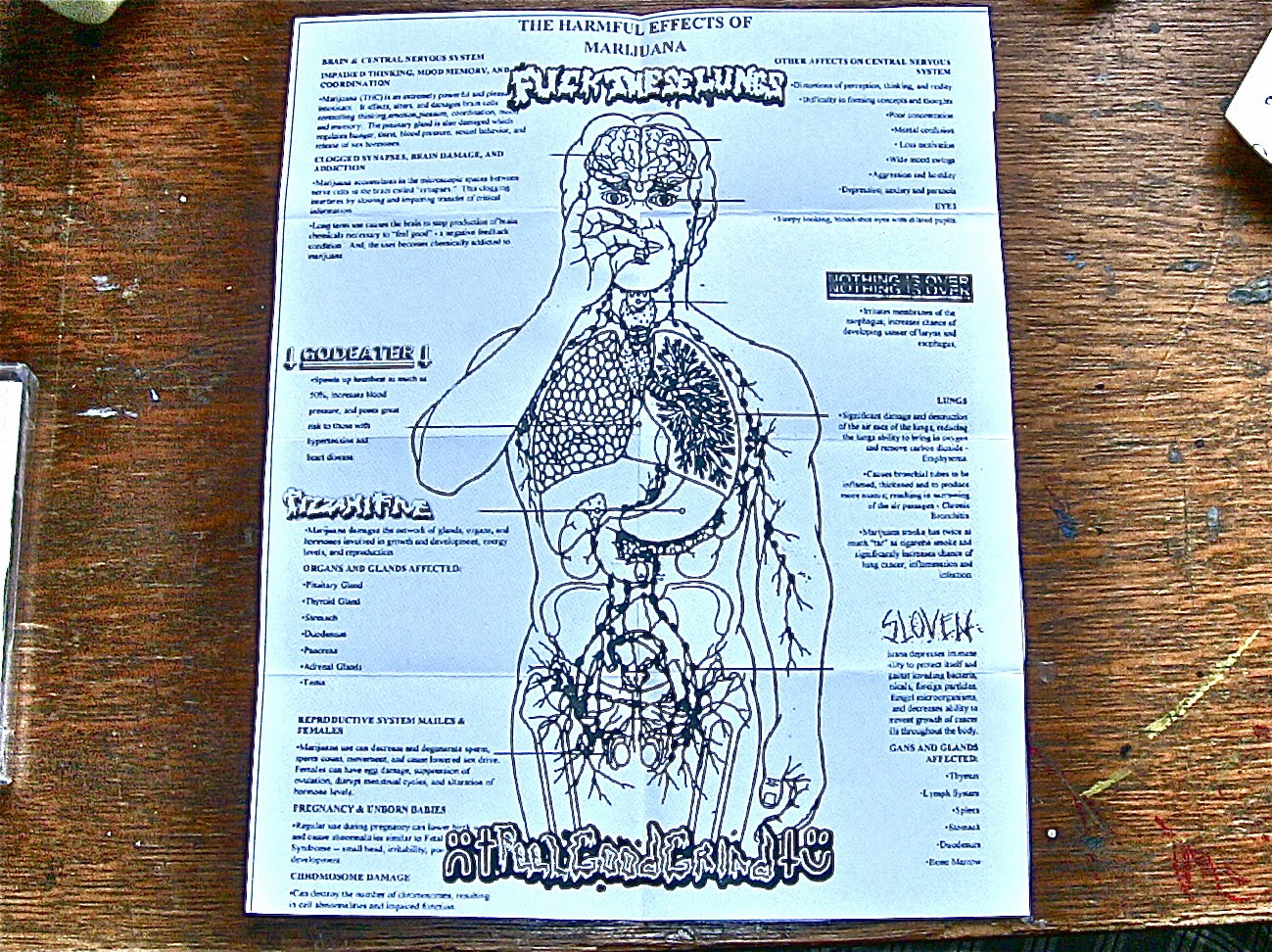 No expense was spared on the presentation here! The J-card is full color and printed on quality paper, and it comes with a double sided, fold-out insert. Tons of info and weird pictures. I loved looking at all this again. 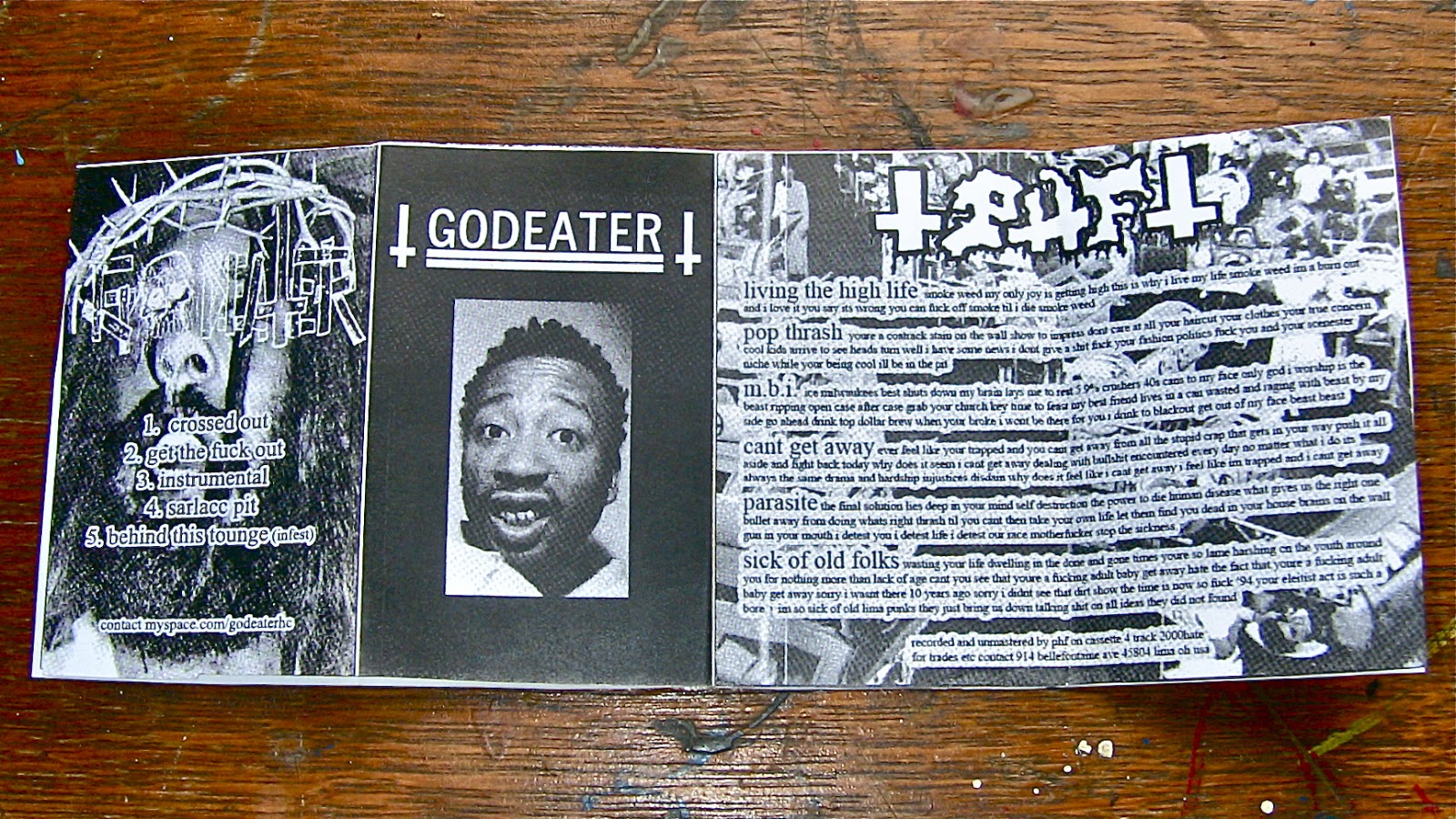 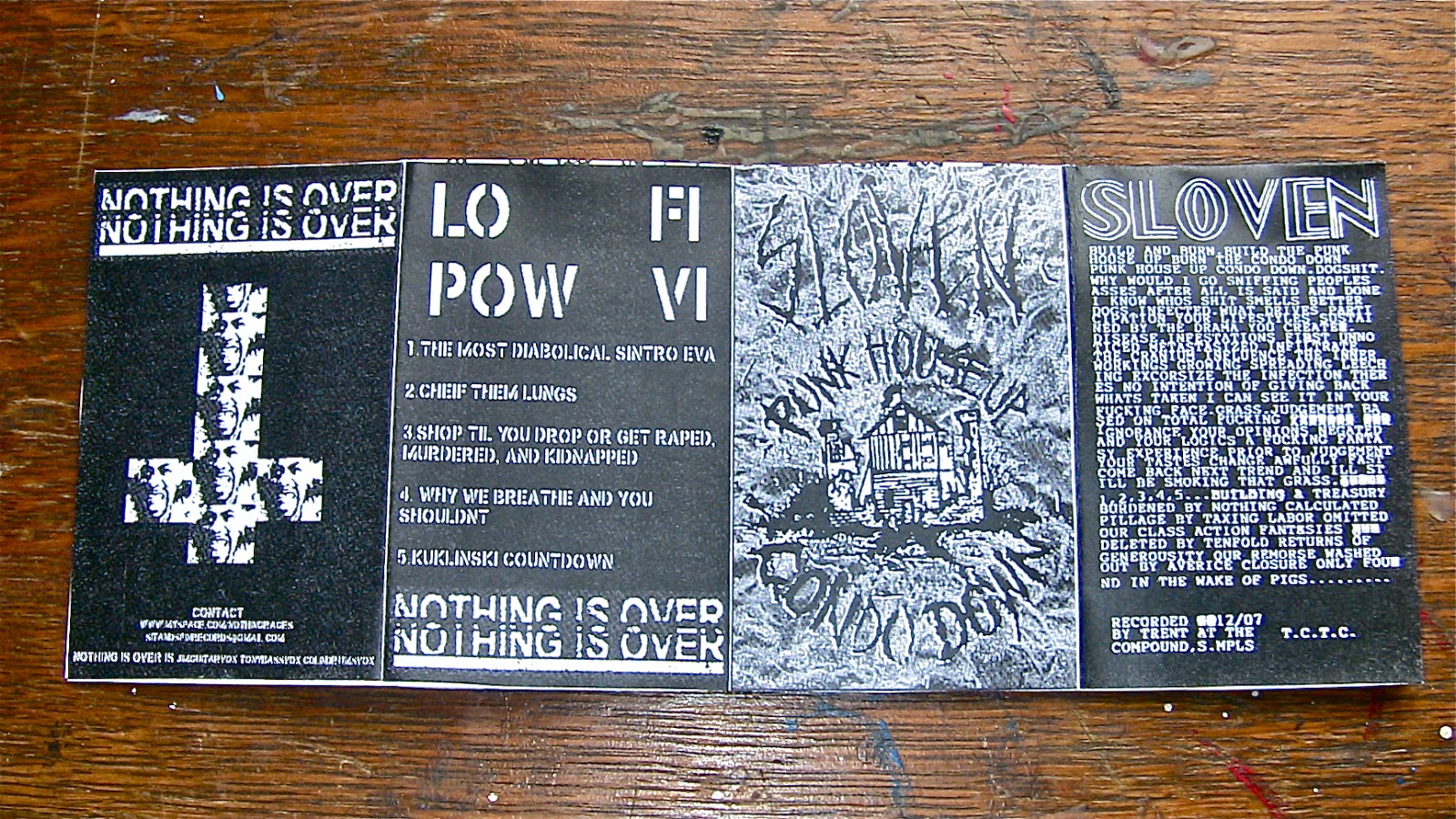 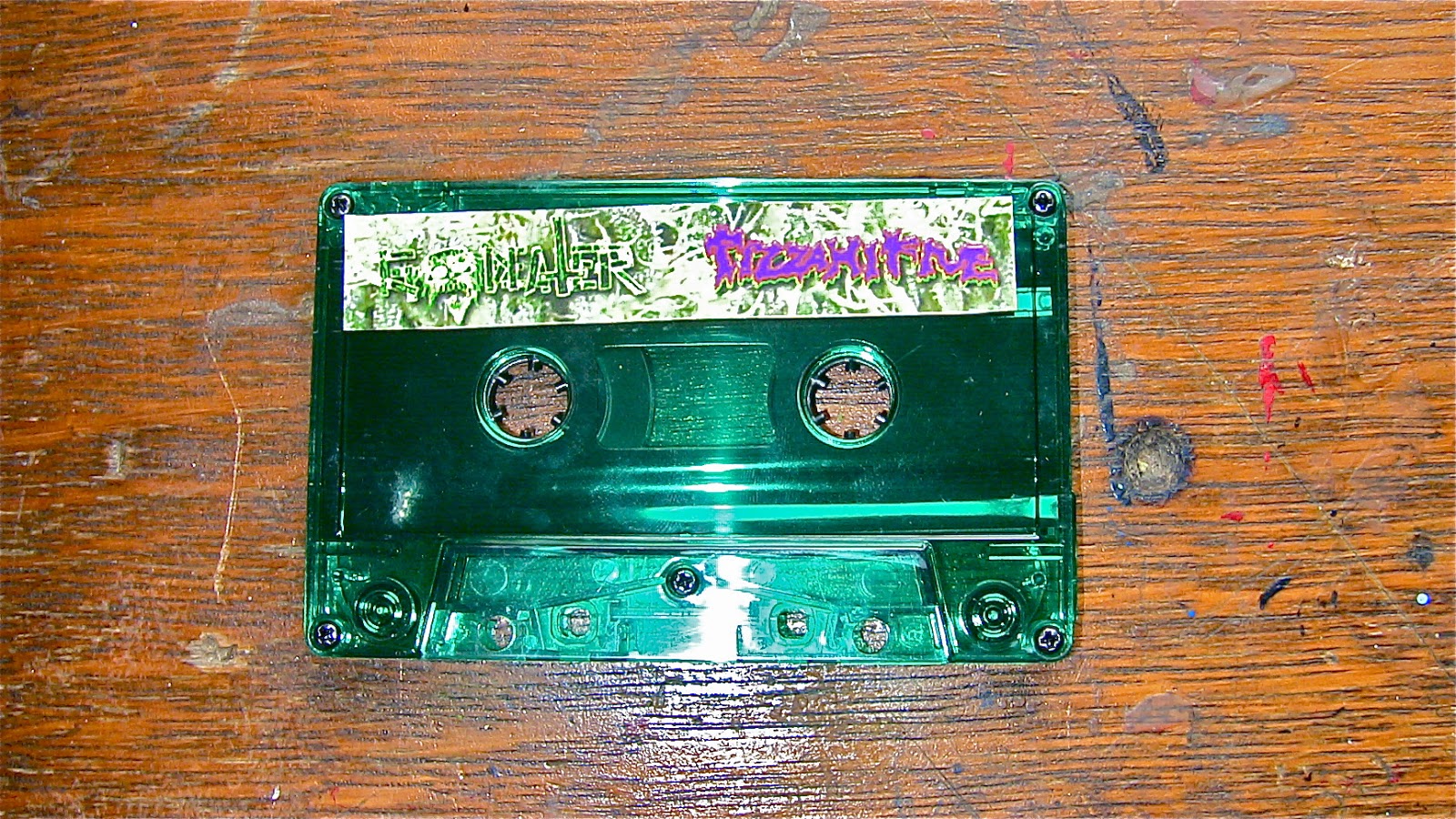 Back then I wouldn't have ever guessed that people would be geeking out over bands like Pizza Hi Five years from now. I think that's pretty great, and shows that good quality music will eventually reach the audience it deserves. As for finding this, good luck. This copy's with me forever. 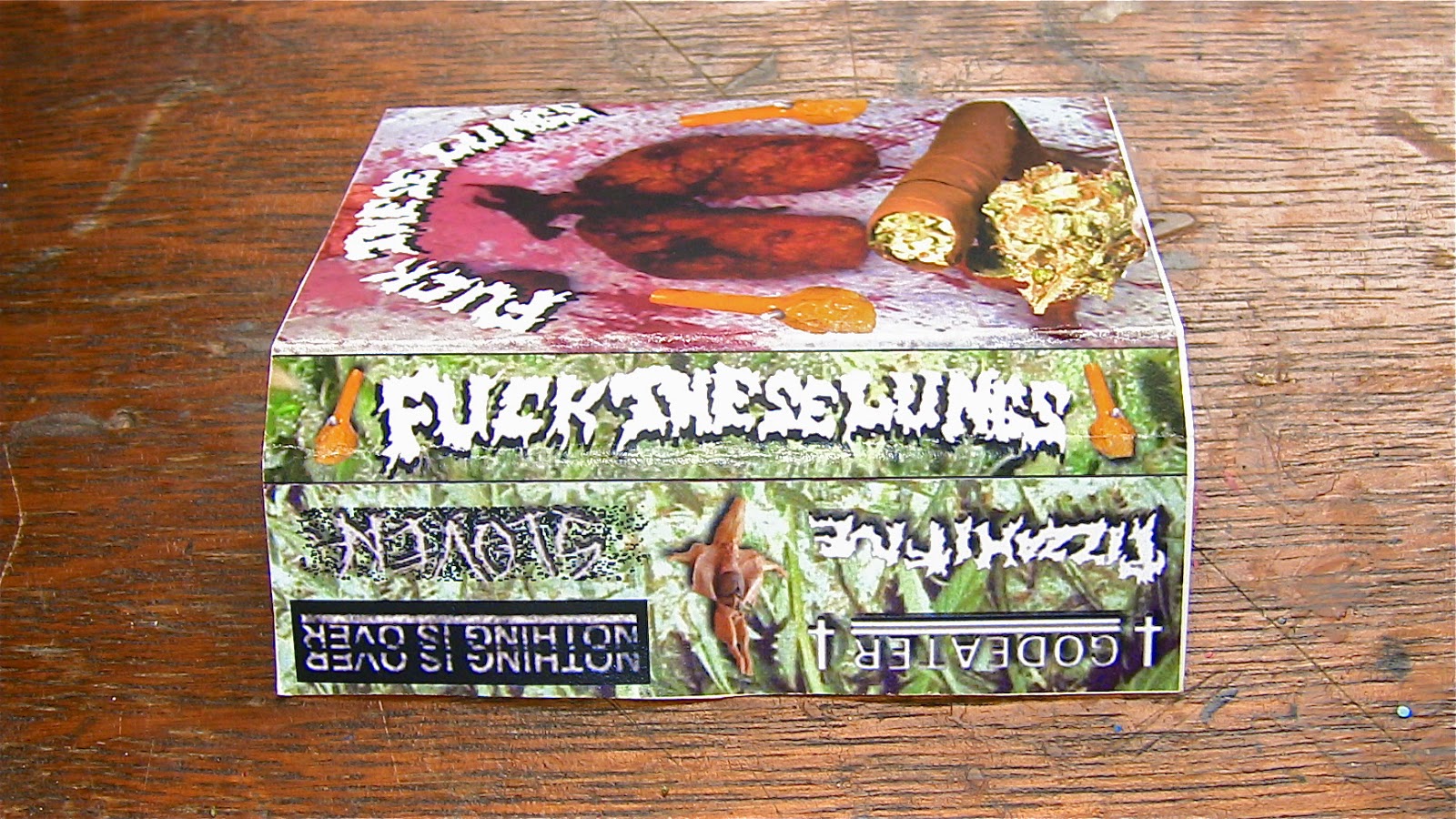 As sprawling and active as the west coast scene is, I haven't come across many bands playing he kind of grindcore Syntax dish out. I believe this is their first physical release, the "Corridos Grind" EP. Released on Nice Dreams Records a while ago. 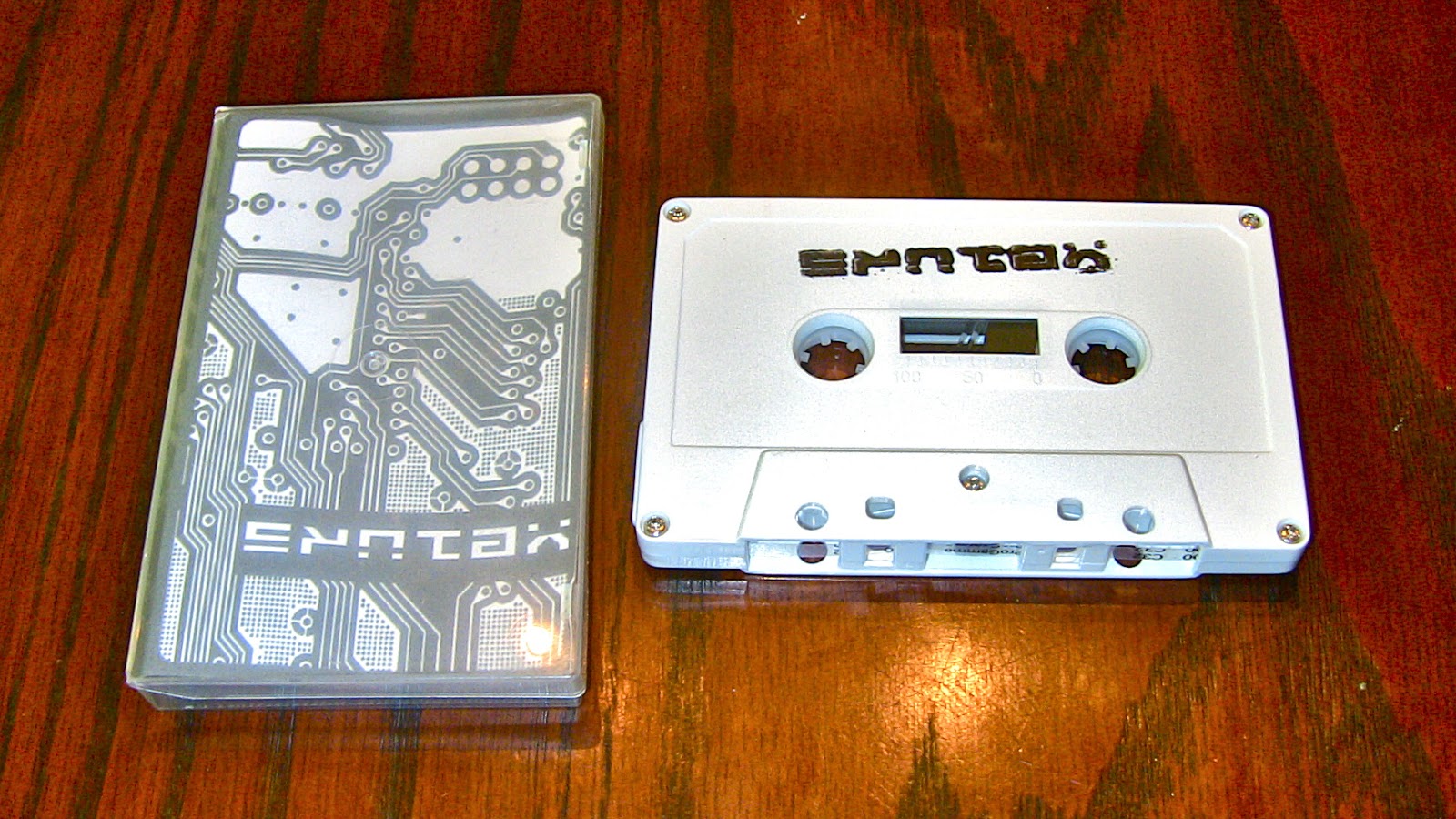 Steering away from straight blasting powerviolence or deathy grind as is the norm over there, Syntax dwell on the discordant side. i.e, blatant and unapologetic "Jouhou"-era Discordance Axis worship. A style that I am obviously all for, and these guys nail all the great characteristics. No bass player, obligatory, tons of mid-heavy, melodic, dissonant riffs, and the vocalist even keeps up the "nuts-in-a-vice" Chang scream through out the entire EP. All that said, this really is a solid tape. One that I find myself playing often these days. The guys lay down some ridiculous wanky riffage on here, and they're a nice bit of diversity from the WCGC crew. 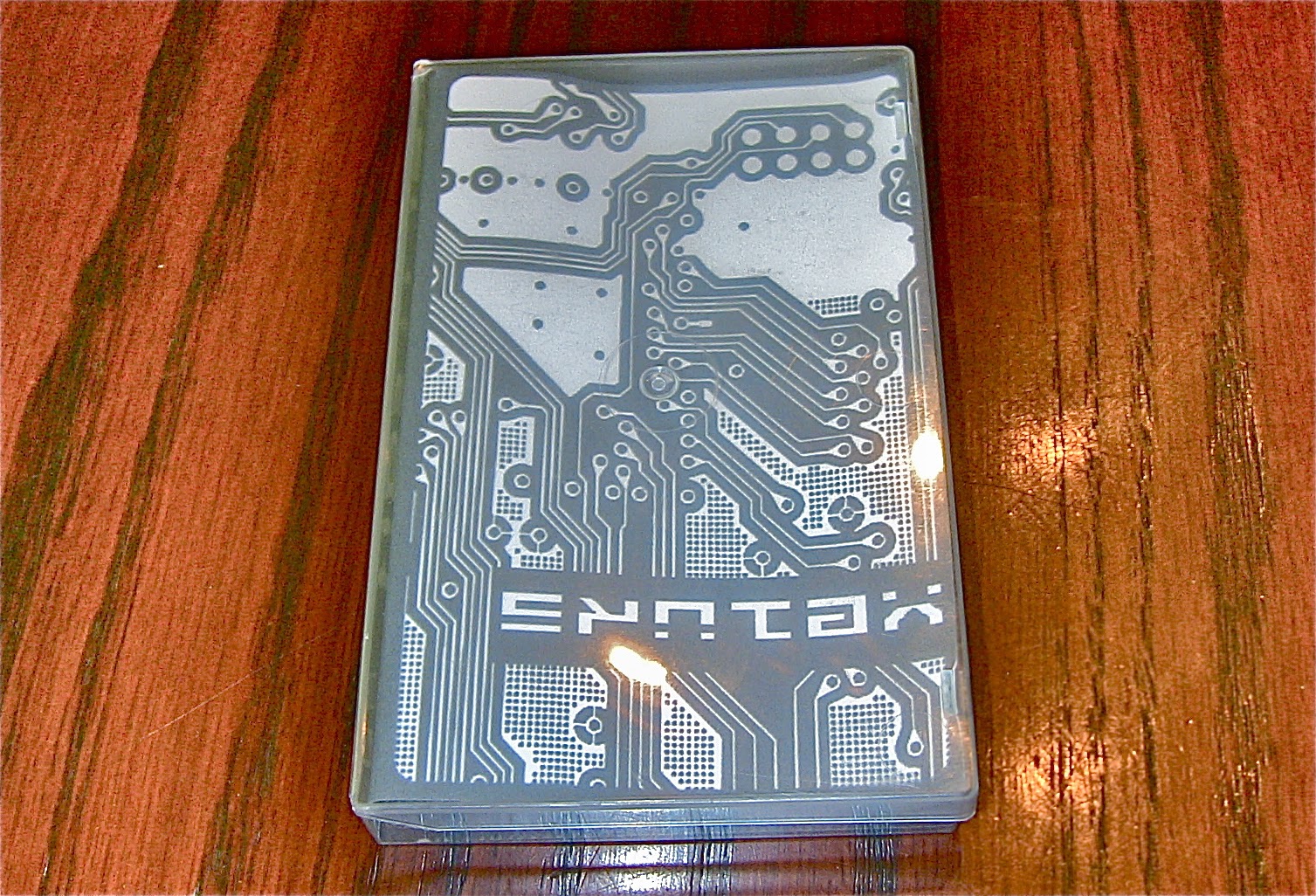 Mr. Nice Dreams Records hooked me up with this copy last year, which was a very nice and thoughtful gesture. Nice looking, detailed 3x-fold cover sleeve, with an almost matte finish. Very fun to look at. Printed on both sides. The tape is a simple stamped white shell-cassette. Sounds wonderful! I'm unsure how many of these were made. Couldn't be more then 100. 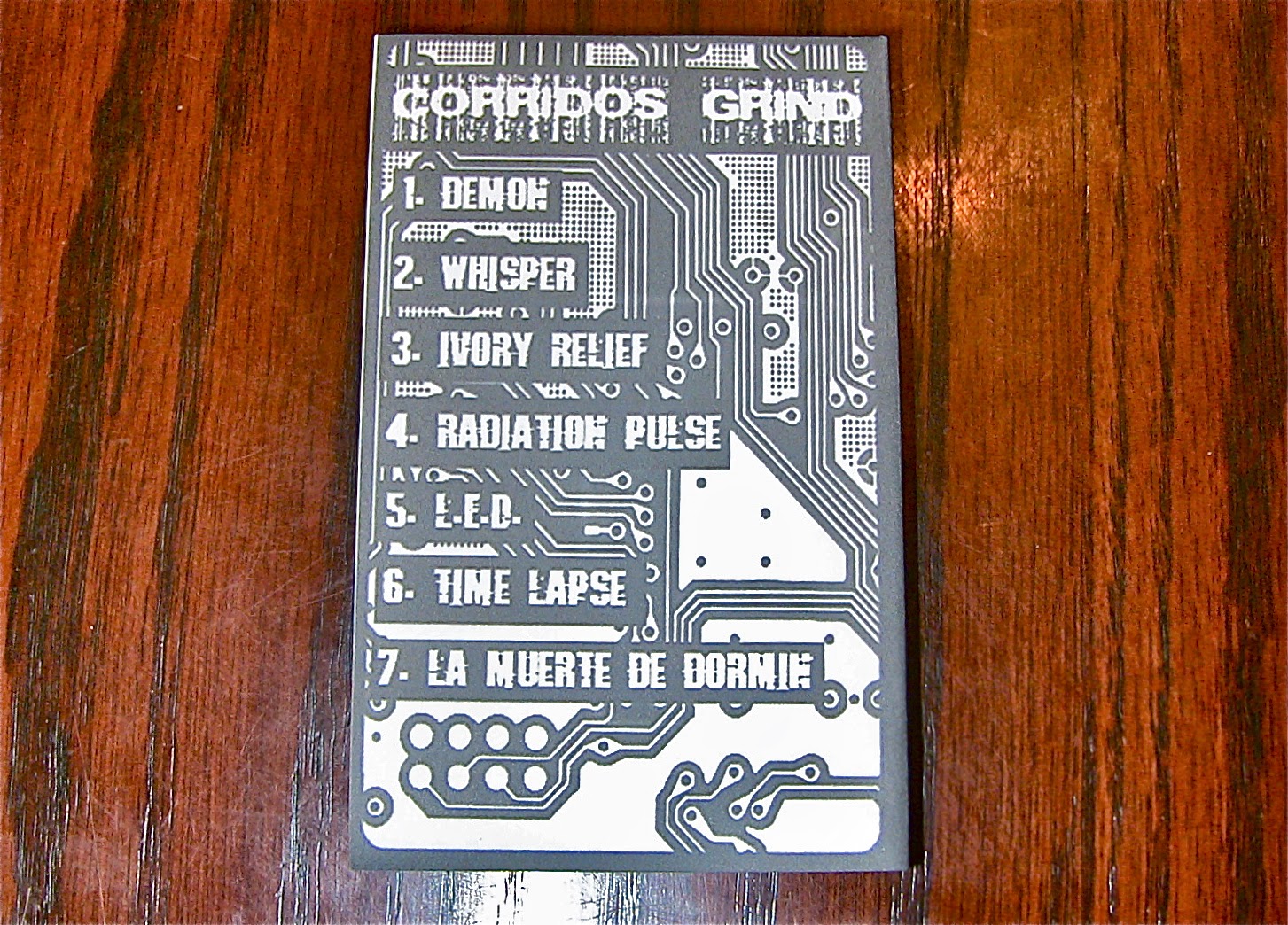 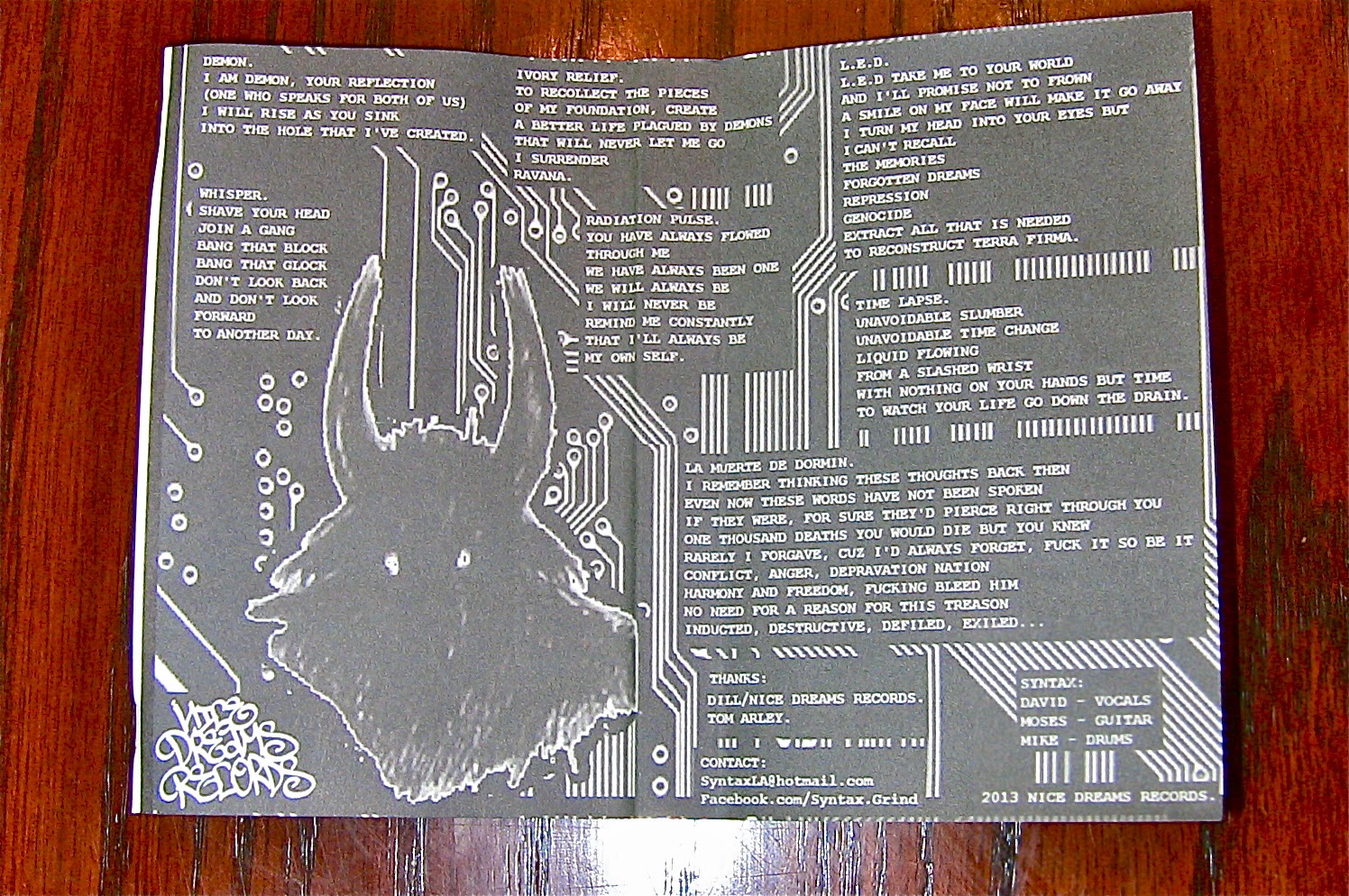 Syntax also have another split tape with Murder out now. I think it's a compilation of some demo's, but it sounds great! I believe a split 7"is also in the works! Can't wait to hear the new material! 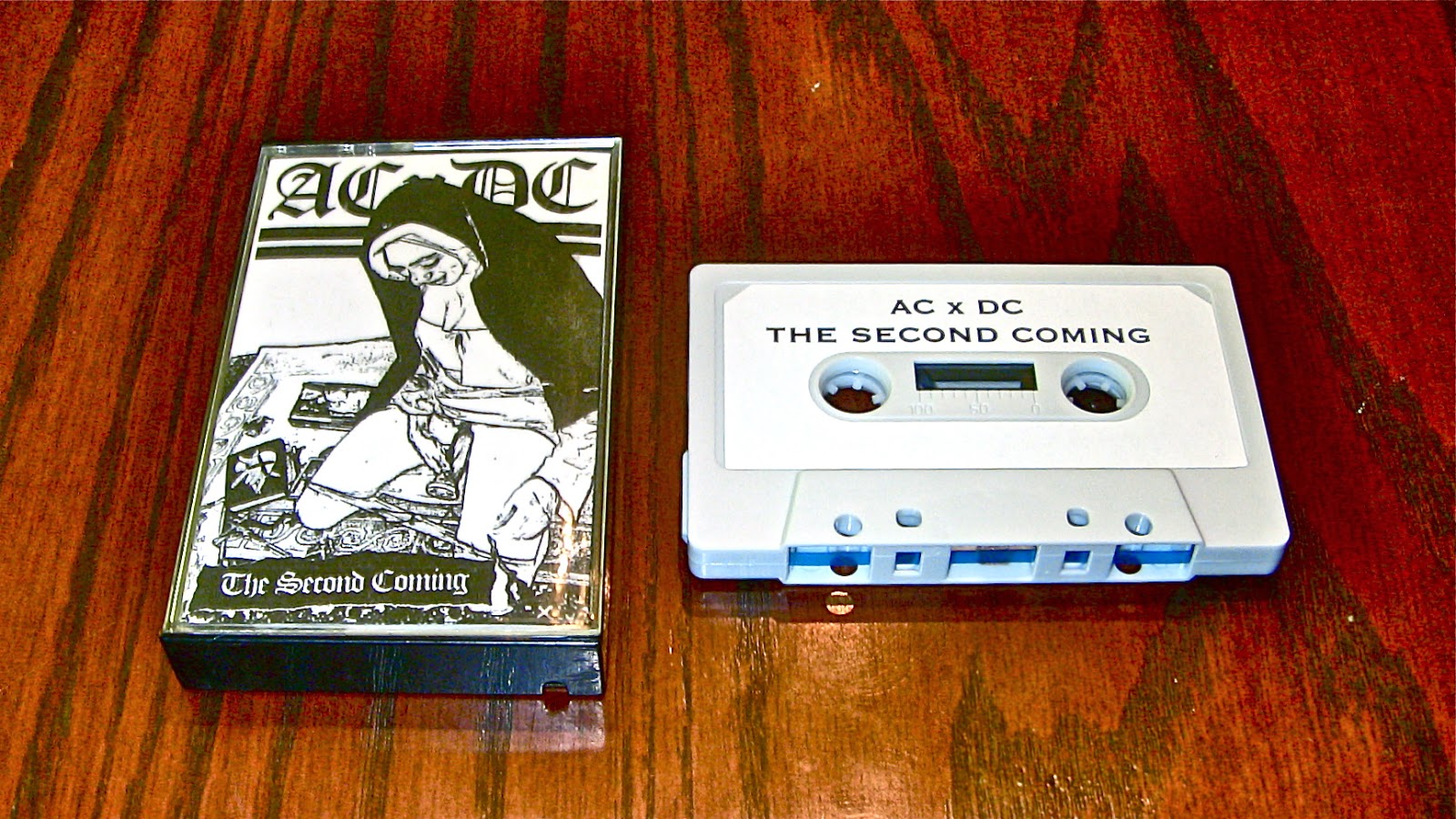 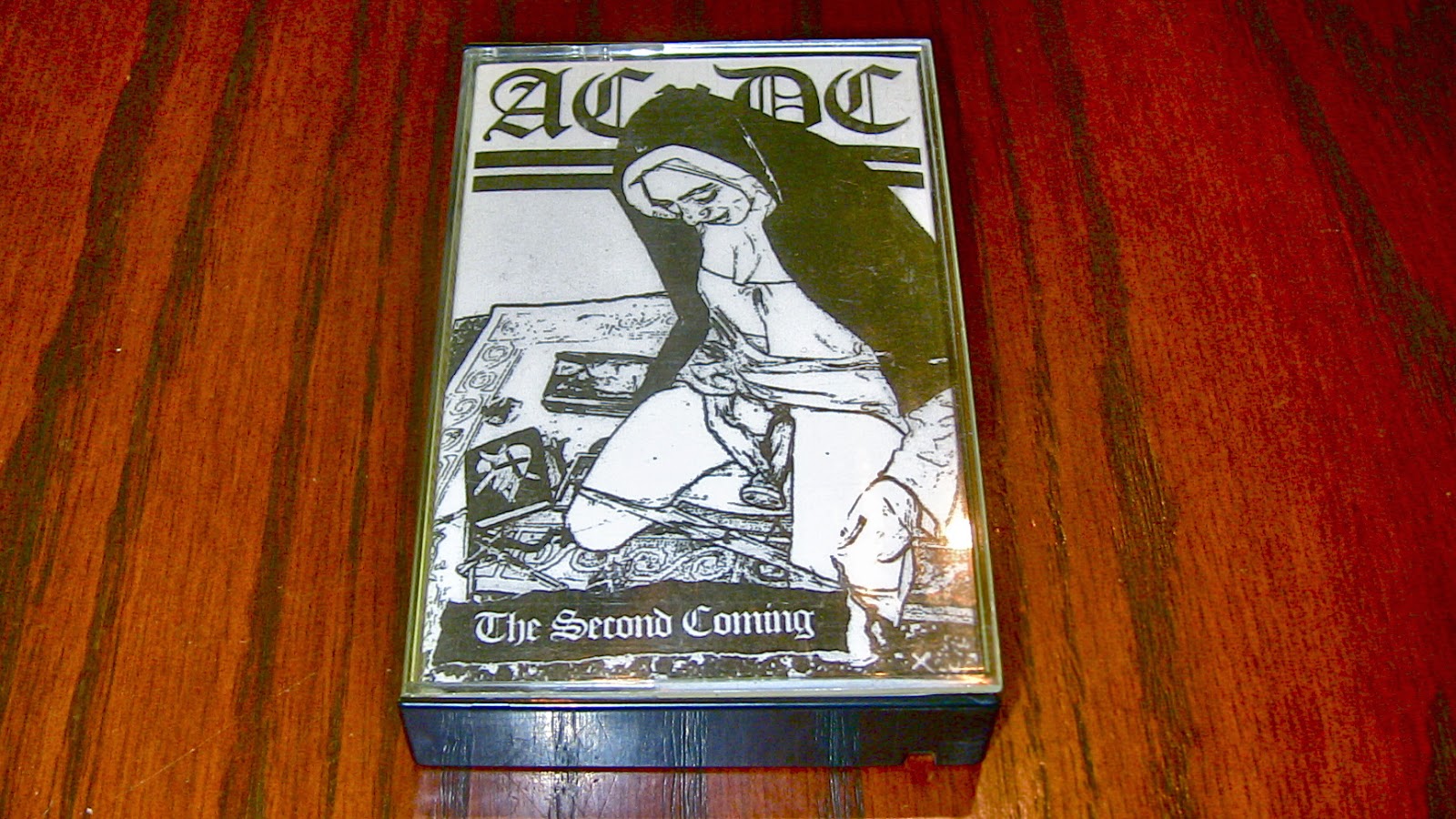 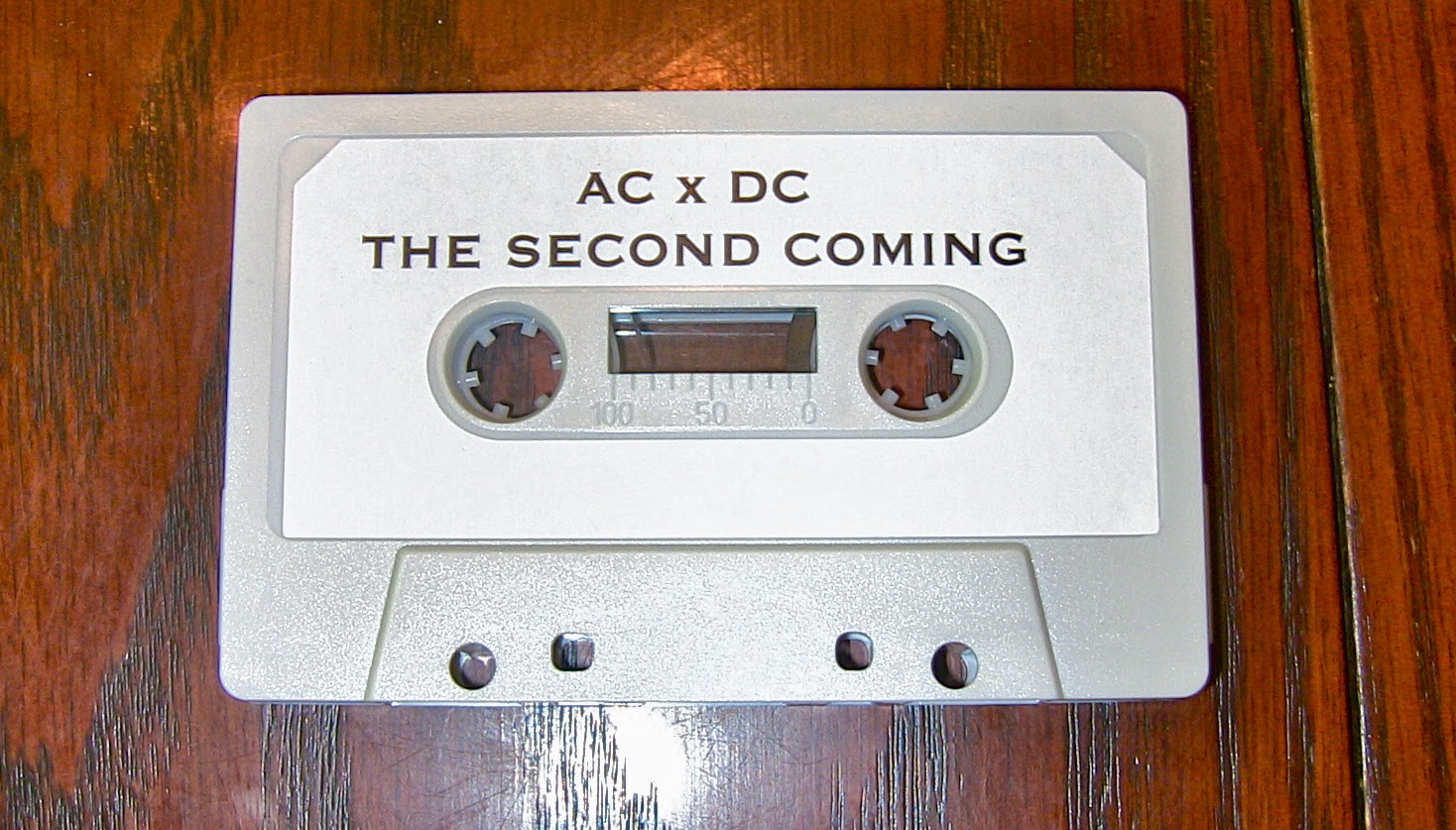 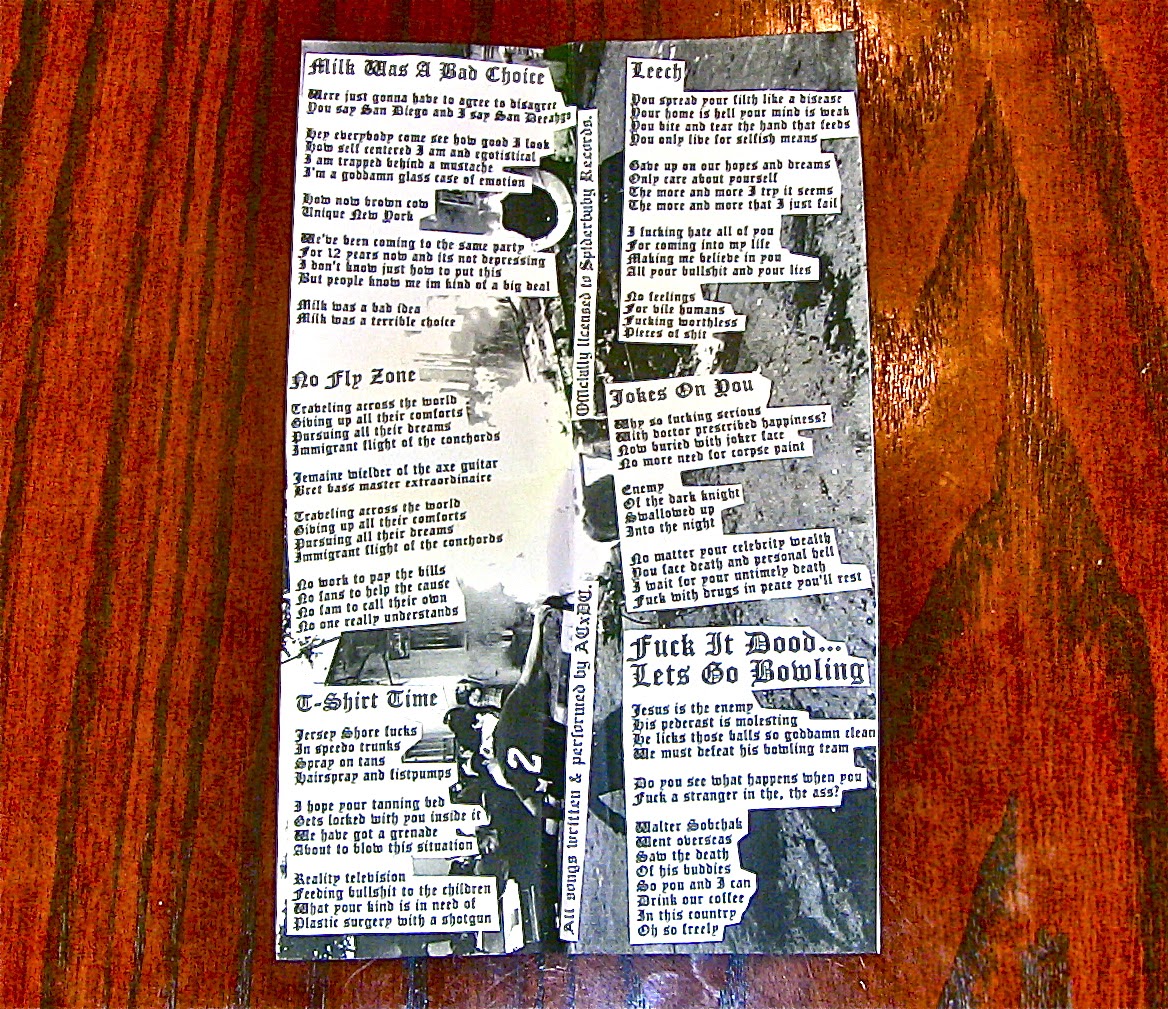 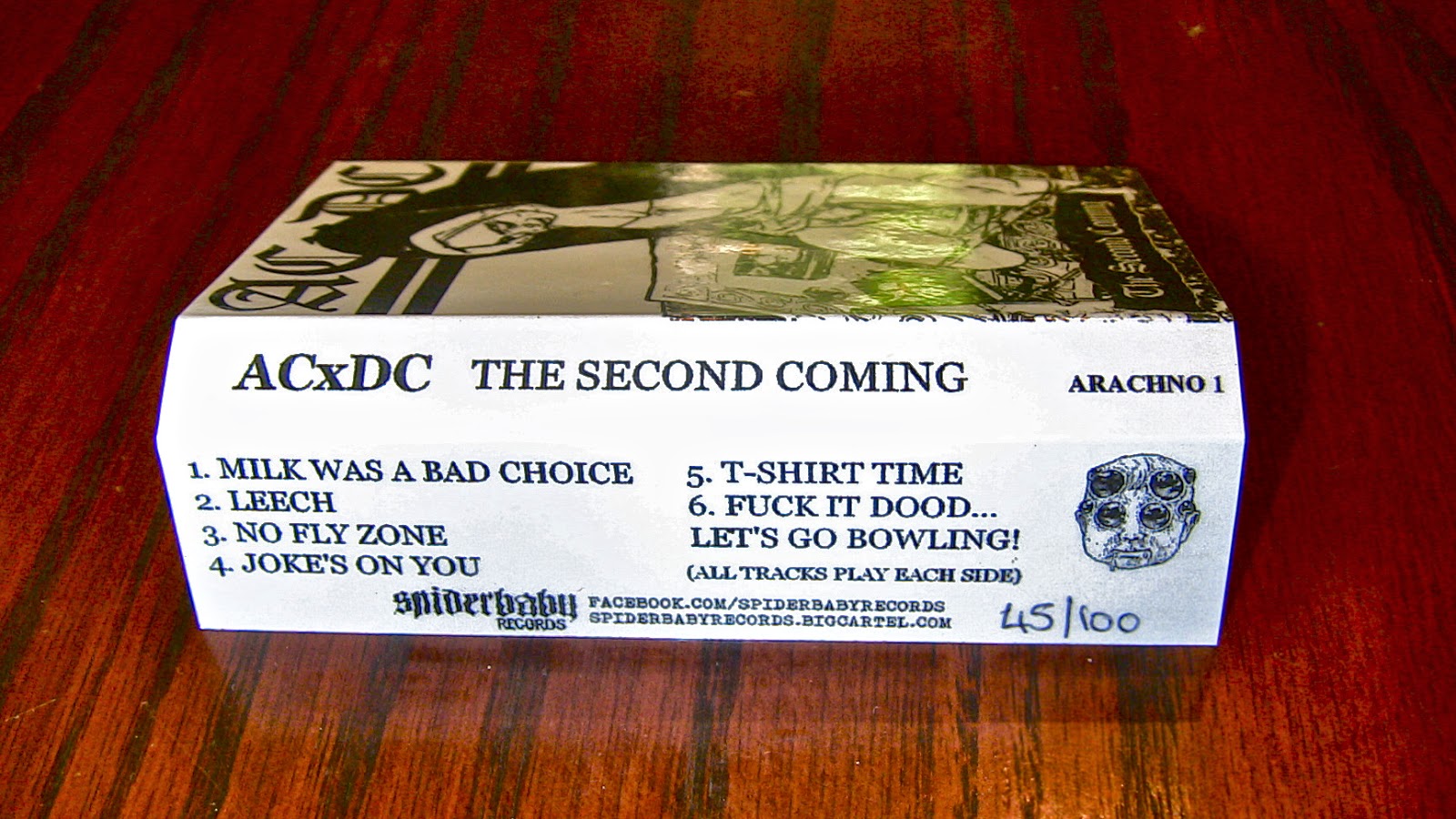 I don't know why it is exactly, but I've just never really been able to completely get into Vile Intent. Every one of their records has fallen into the, "it's-good-but-I'll-rarely-listen-to-it-again" hole. It's something that's honestly seems pretty crass to me, given that the band has everything I look for in powerviolence; Lo-fi recordings, quick tempo shifts, tough breakdowns. But consistently their records have just gone in one ear and out the other. That being said, I've always given them a chance. So when a cassette copy of their new, then-unreleased 7", "Skin In The Game" started floating around last year, I quickly snatched a copy. 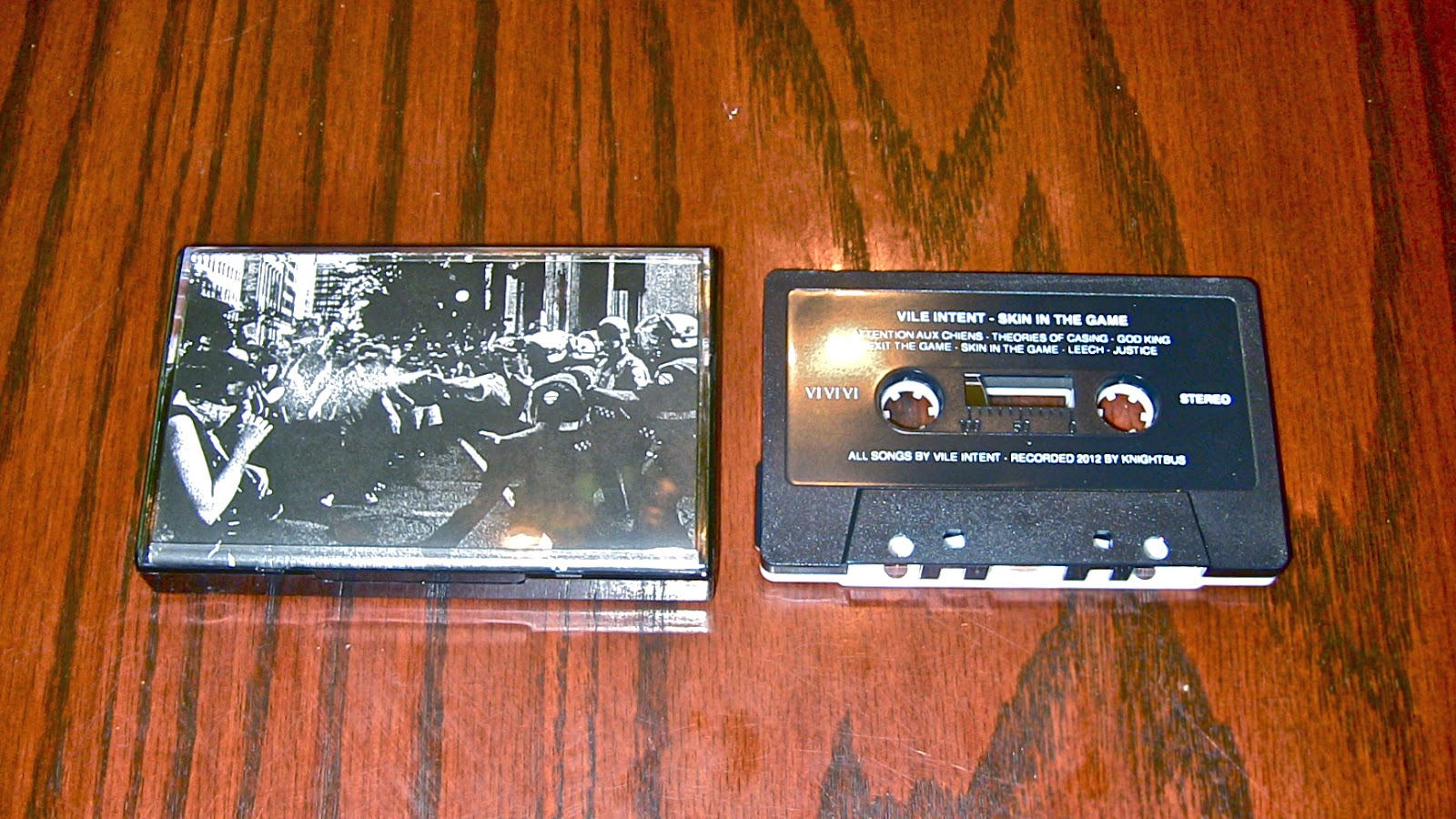 Out of all of Vile Intent's records, "Skin In The Game" would actually have to be my favorite. The rough Crossed Out worship is still overflowing ("God King" could practically be a cover of a lost CO song), but they made their songs just a little bit more captivating and hit just a little harder on this one. I'm really finding it difficult to describe my thoughts on it anymore, it's just a basic powerviolence record. It's good, definitely, but I still wouldn't call it a great record. They seem getting better, though I might be the only person who thinks this. 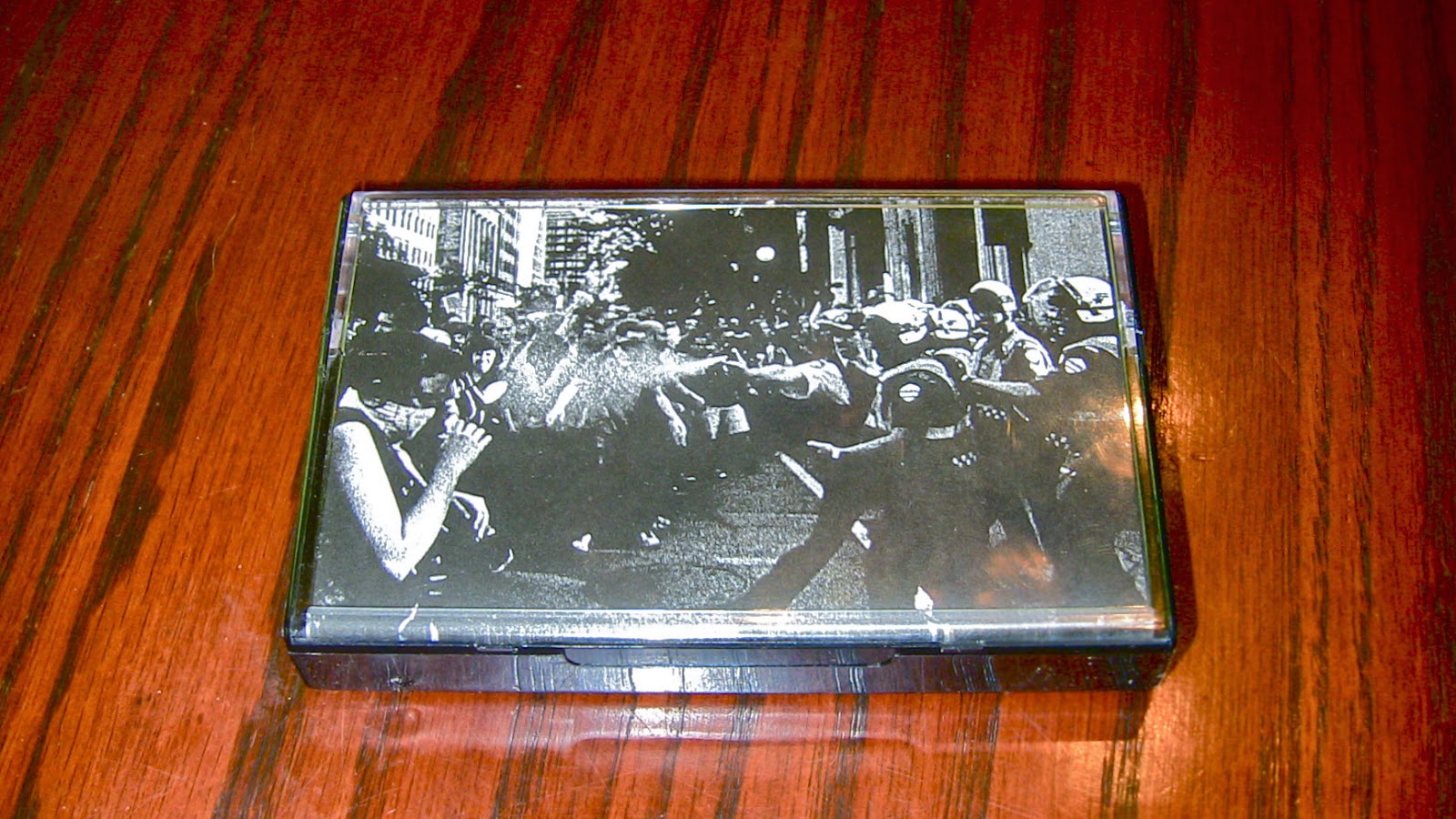 Very nice pro-cassette job here. They wisely decided to put the whole EP on one side, leaving the B-side of the tape silent and un-printed (something I haven't seen before or since actually).  I believe they had this made for a festival they were playing. Not sure of the numbers, but it's probably limited to 100. 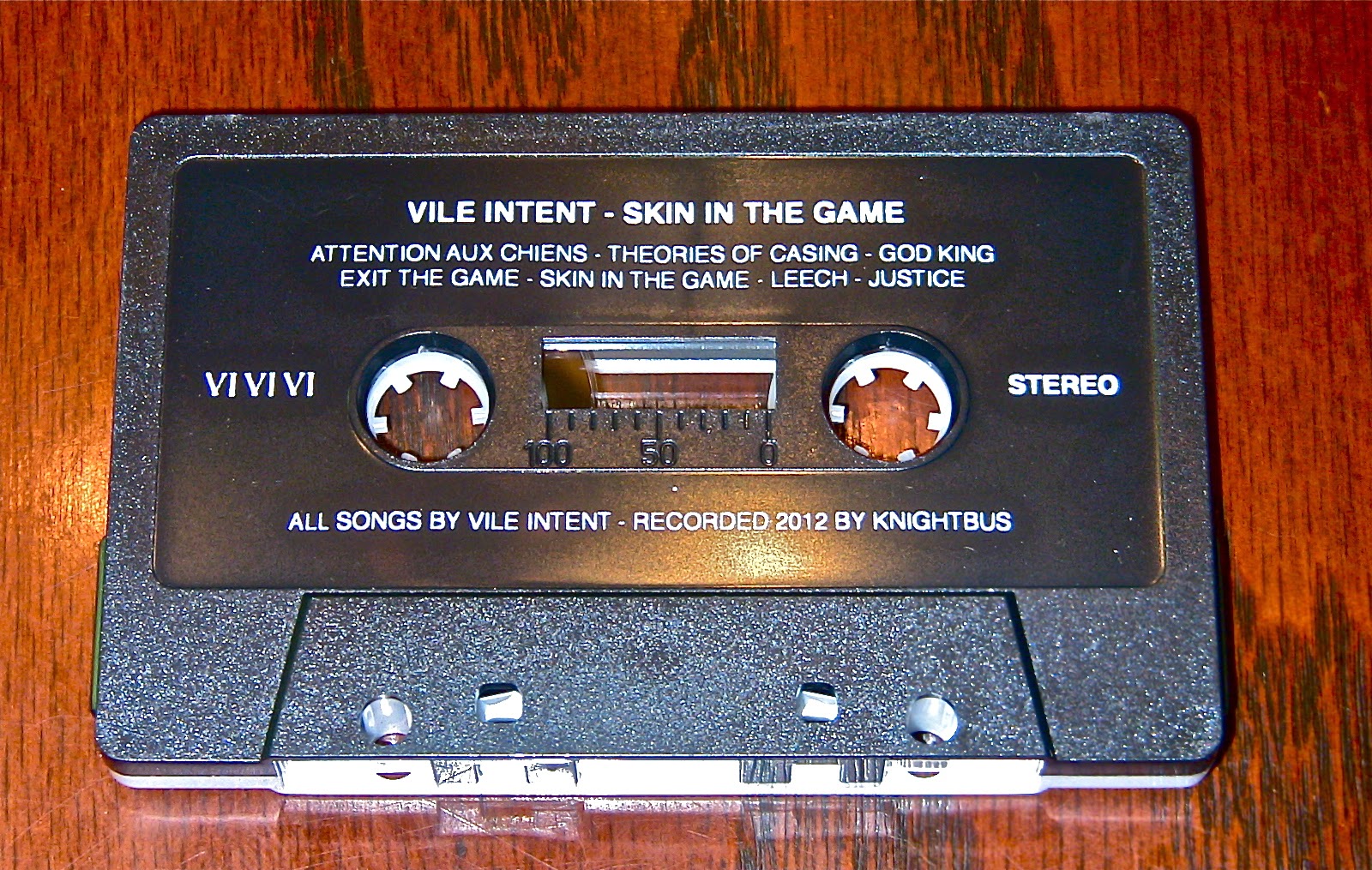 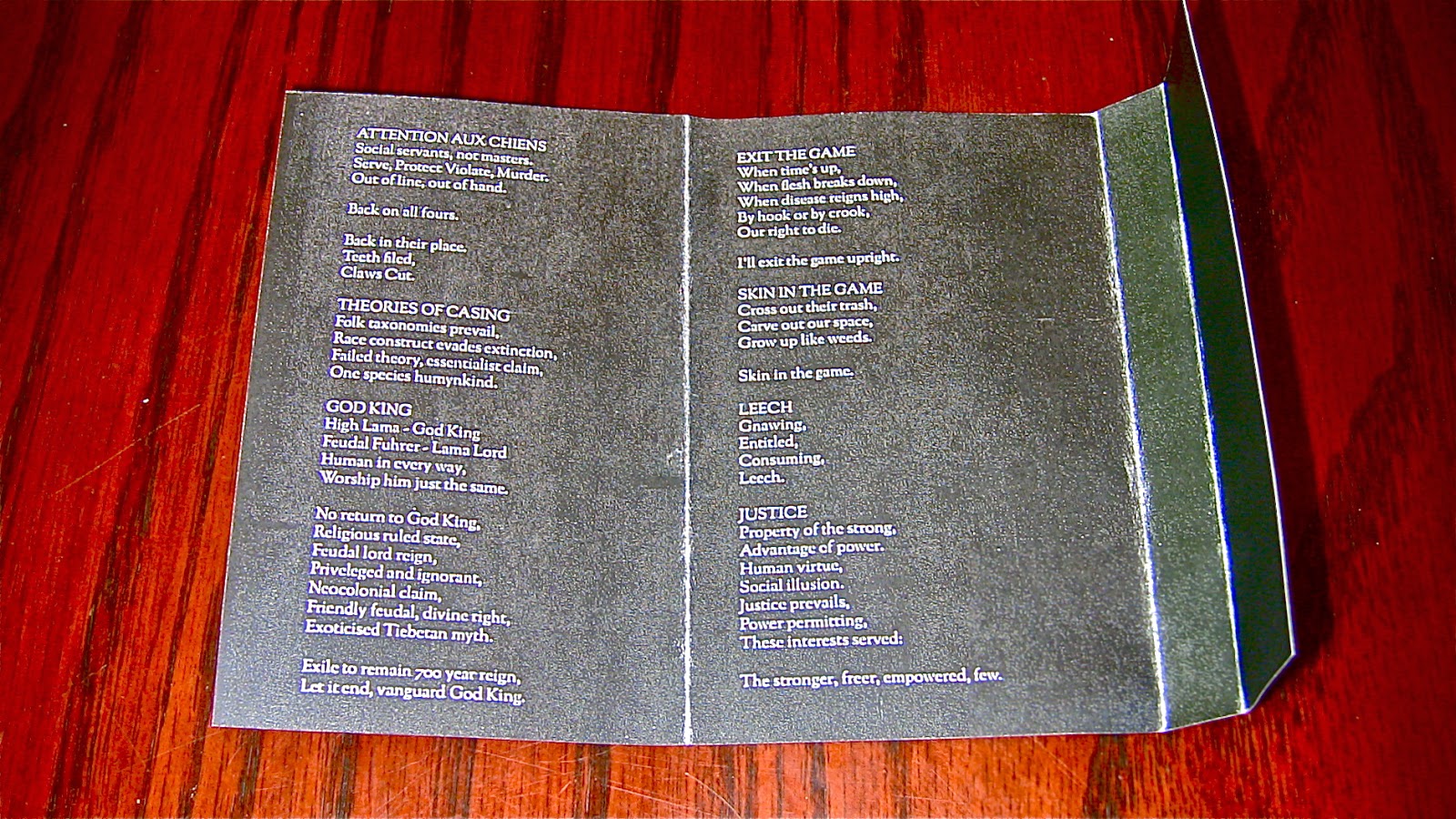 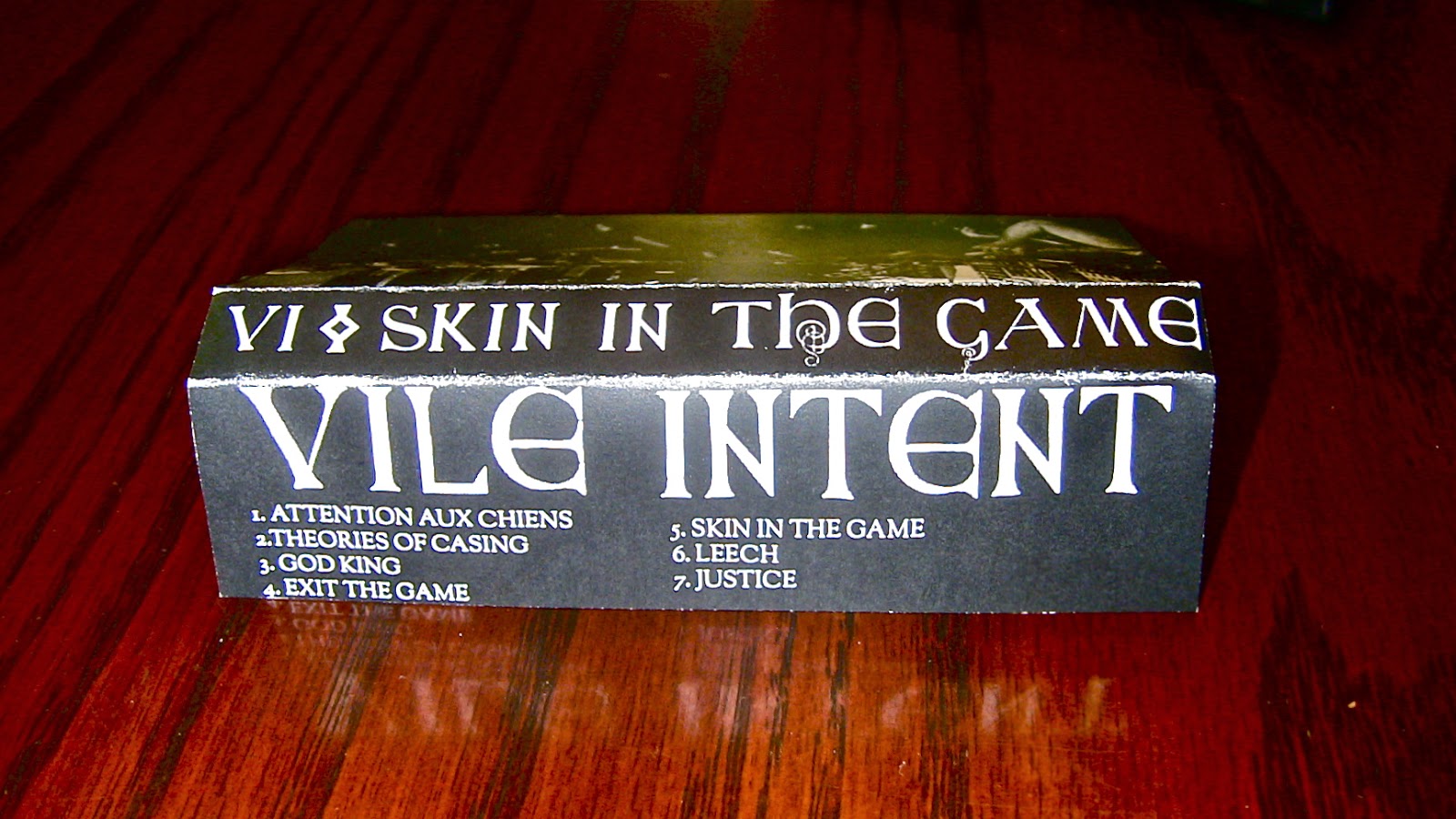 I haven't checked the status of these guys in a while, I'm pretty sure they're still together. Here's hoping the next record is a real winner!