"Contretemps" fucking rules. I was overjoyed when I saw that Sissy Spacek somehow still had copies for sale at their merch table. I've been after this one for a long time. This is what I like to call some perfect noisegrind. Released on Post Present Medium, 500 copies pressed on black vinyl, 45 RPM. 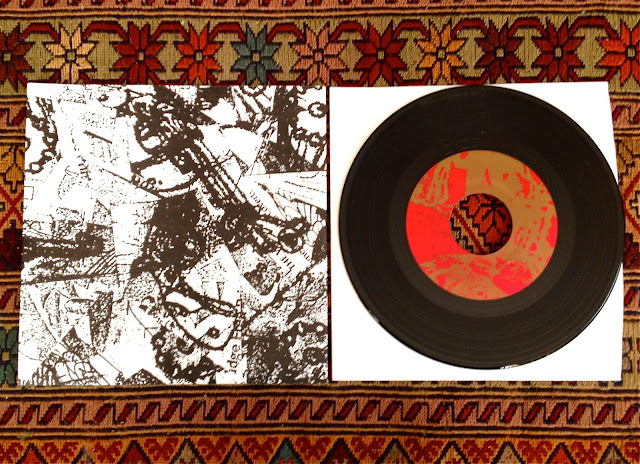 Out of all of Sissy Spacek's newer EP's, "Contretemps" still leads the pack as my favorite of their grindcore records. This EP managed to get a sound that none of the other records really managed to nail. John's bass tone is so rounded, crunchy, bassy and overblown here. It fills up the whole spectrum of sound. They've also just never sounded so pissed before, not like this. Corydon's voice rides a constant plateaued level of intensity. Shouting rapid fire vocals to match Charlie Mumma's stripped down, pure blast beat drumming. Listening to this on vinyl was like hearing it for the first time. The master is devastatingly loud and bass heavy, it sounds like mountains crumbling. But still under all the noise, Sissy Spacek have written some of their finest songs. Every track can stand on it's own thanks to the excellent riffs that Mr. Wiese can write. Tracks like "Gloves", "End Mill", and "On On On On" all have parts that I remember easily and fondly. Great songs, perfect sound, and incredibly tight performances. 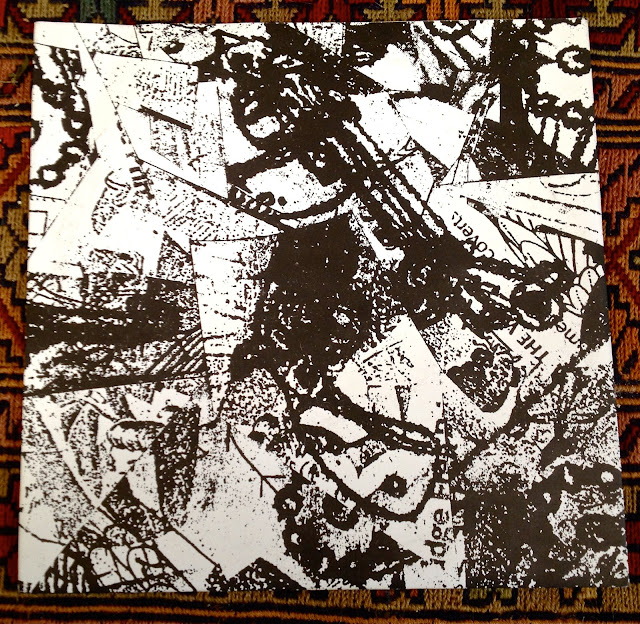 The record comes packaged in a very flimsy glued sleeve. Seriously, I'm so scared of ripping this thing. As usual, no insert or lyrics included. 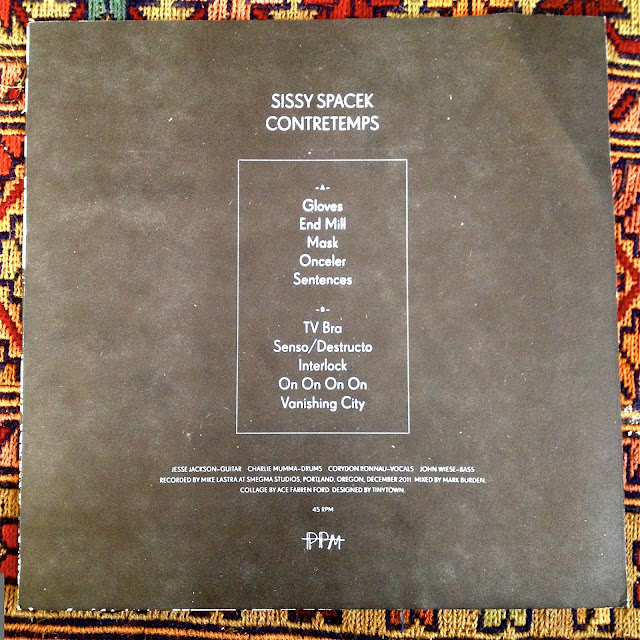 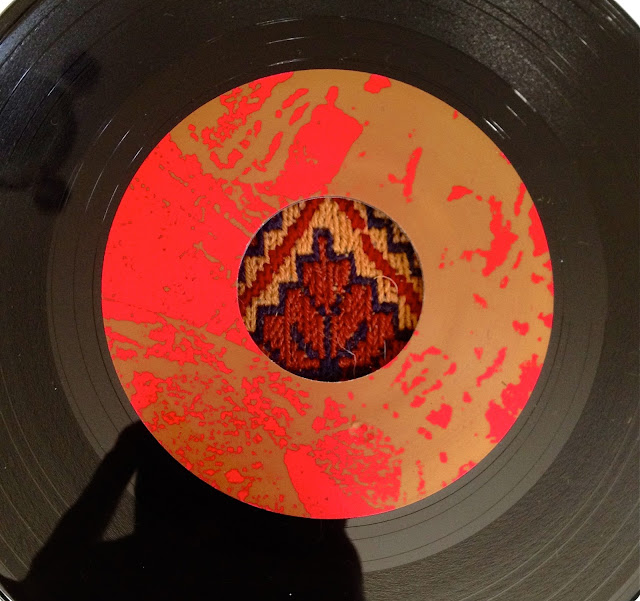 Not sure if the band still has copies or not, but you can still find this on Discogs pretty easily. Buy or forever cry.

I was recently privileged with the opportunity to ride with a wonderful companion up to Buffalo. To catch Sissy Spacek and Wolf Eyes on a very rare jaunt through the East Coast. Pure Disgust also played, but I only caught the very last two songs of their set. Seemed like it would have been pretty fun to be there for them too. Regardless, the band I was most excited to was Sissy, who slammed through nine minutes worth of tracks that had me smiling the who time. Incredibly tight, and drenched in chaotic, shrapnel-toned bass noise. It was well worth the trip up. I also managed to scrounge up enough coin to get a few new, and not so new SS records. This one here being brand-spanking, and carried on a very interesting idea. "Roulette" is a new 7"  EP/vinyl experiment brought to us by Claimed Responsibility Records. Black vinyl copies are limited to 100 (as are the white vinyl copies). 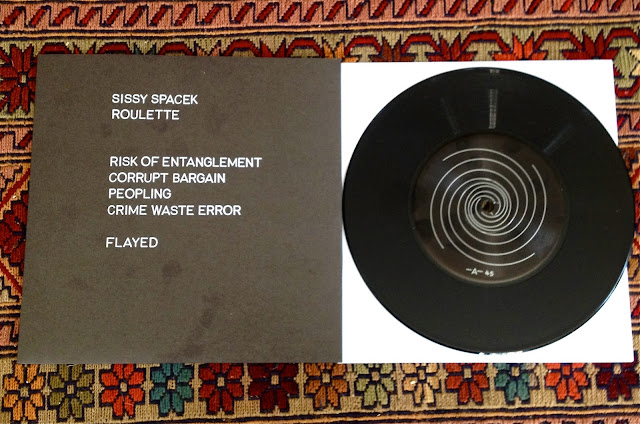 I had a keen eye on this EP in particular when I learned about the details of the A-side. Four new tracks, each one contained on a separately cut groove from the other three. That means that each track also gets it's own starting point at the beginning of the record. So it's literally a roulette to which track you're going to get. I've heard of this idea being done in the past, but I can't for the life of me remember what record it was. Sounds like an incredible process to make, and I imagine it could be infuriating for some of you to try and hear all the tracks and keep landing the same ones. Amazingly, I somehow managed to hear each different track within the first 5-6 drops of the needle. It's a cool idea, and definitely fun, but each track is only a spare few seconds long. Riding the same noisecore influenced, blasting bass wall noise they've been doing as a duo. Hopefully some MP3's of this pop up sometime soon. 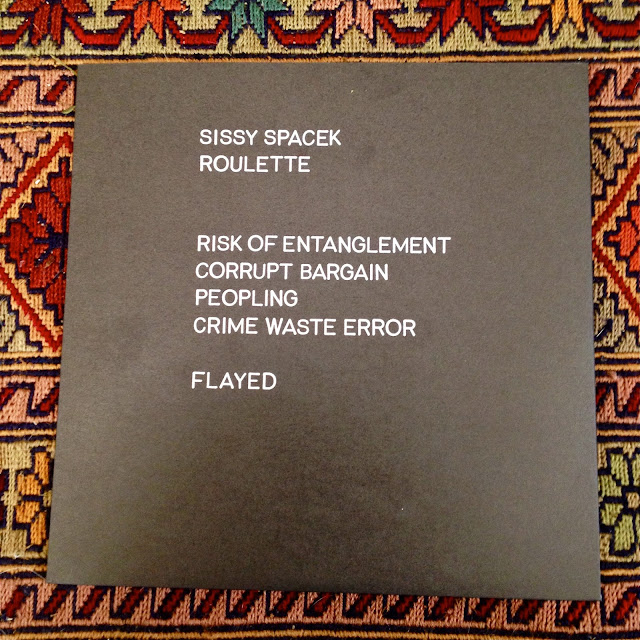 The B-side track, "Flayed", is a cut-up collage piece recorded sometime in 2011. I've honestly only scratched the surface of Sissy's collage years, but I definitely am a fan of that side of them as well. This track is filled with reverse noise loops, bits of drum tampers, industrial steam sounds, what I think is human moaning. And that's just scratching the surface of the huge amount of dense layering and manipulation that's going on here. It all morphs organically through each sample and field recording, sometimes landing into brief parts of more continues loops and gradual builds. Probably the side I'll be going back to more often honestly. 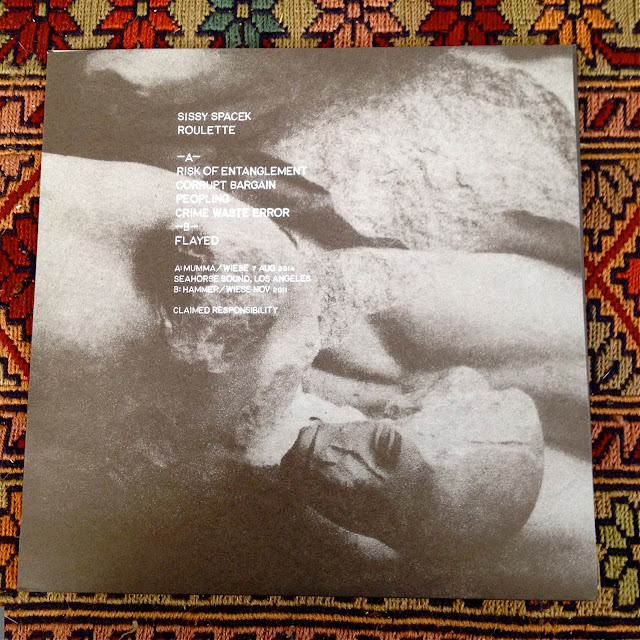 We got a nice, sturdy, glued matte sleeve to hold the record. There's no real insert included, though mine did some with a little show flier from somewhere they played. 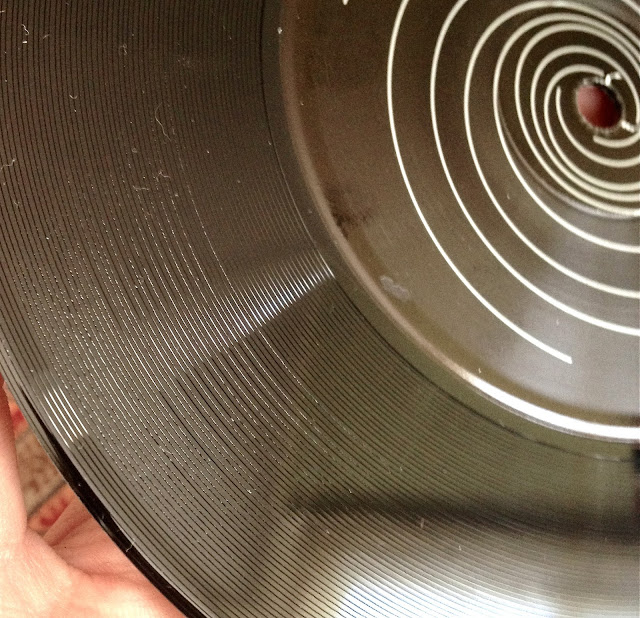 I tried to get a good picture to show what the grooves are doing. 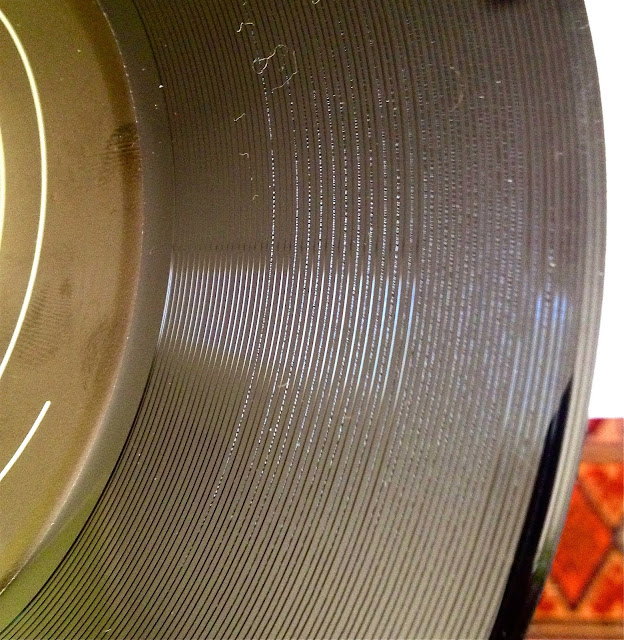 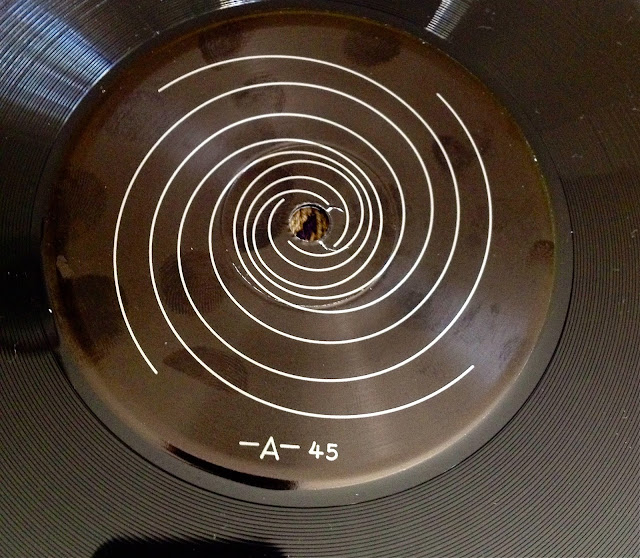 All around I thought this EP was a success. It had a clever concept, a solid, however brief delivery, and showed the dynamics this band can work with. Good stuff. You can pick the record up HERE.

I've had this record around for a few months now, and for some reason, I never decided to spin it until very recently. No real reason why it's been left on the bench for so long. Just lost in the shuffle I guess. Goddamn it was so good to finally give this piece of wax a play though. I picked this up when I saw SSS in Syracuse a little while back. I had heard they were selling test press's of their split 7" with God's America on this tour so of course I had to grip it. I'm not sure exactly how many of these were made, but the numbers have to be well below 100. Here is the excellent live split between Sete Star Sept and God's America, 33 RPM. 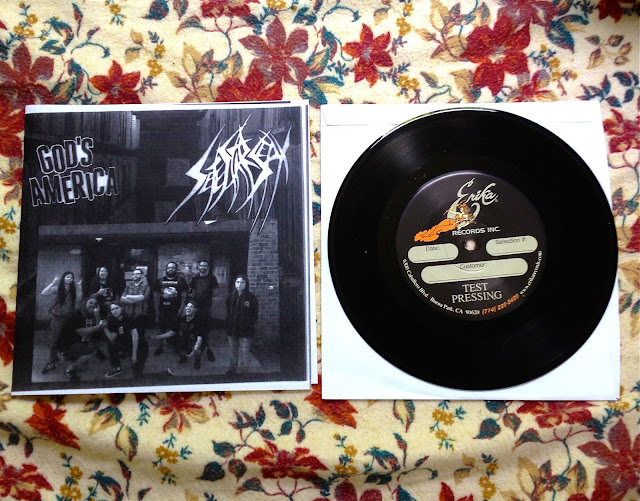 On paper this isn't a 7" I would immediately go and purchase, even though I do like both bands quite a lot. Live recordings have never really been a huge turn-on for me, and both sides on this record were done on the radio sometime in 2014, when they were touring together. SPHC being the awesome weirdo's that they are teamed up with Subruckus Collective (a label I've never heard of) and put both sets onto a 7". Both sides really are great though, and sound superbly raw thanks to the great mix. SSS are of course a complete masterful live band, really one to check out if you ever get the chance. As usual their set is vicious and non-stop, both members expertly synched up with one another. 17 "songs" make up their side. 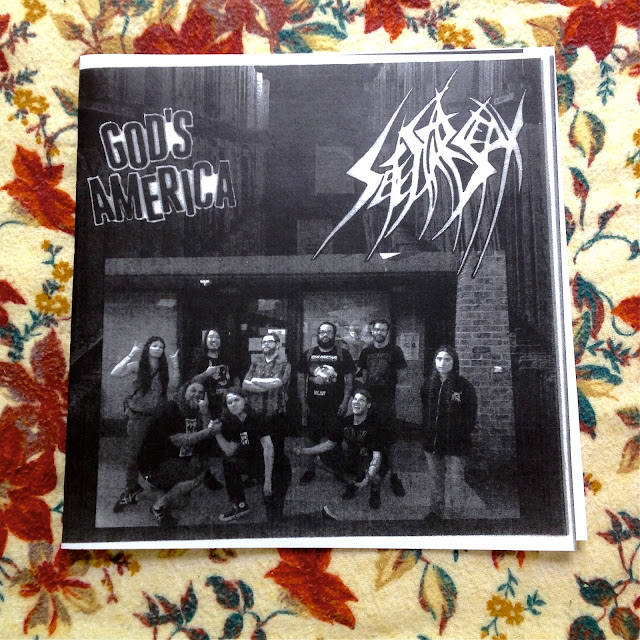 God's America's side is just ridiculous. 15 songs done in about 6 minutes. It's completely unrelenting, but still very tight. Songs start and stop in the blink of in eye, only short snare or cymbal hits offering any break. I honestly didn't know G'sA had this many microsongs, but goddamn this is one of their most chaotic recordings to date. 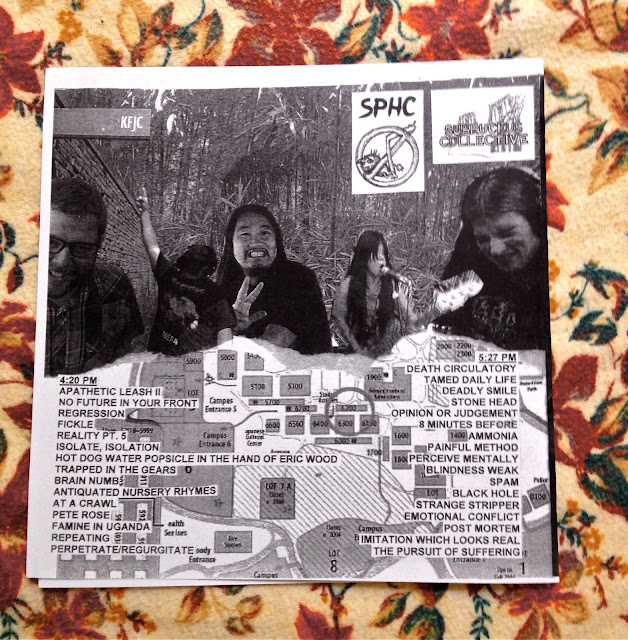 Given the overflow of vinyl records needing to be pressed, of course the band didn't have legit copies of this record in time for the tour. Honestly it's a miracle they even got the test presses! The cover's just a simple photocopied sleeve, with the tour dates printed on the inside. I caught them on the Syracuse date. 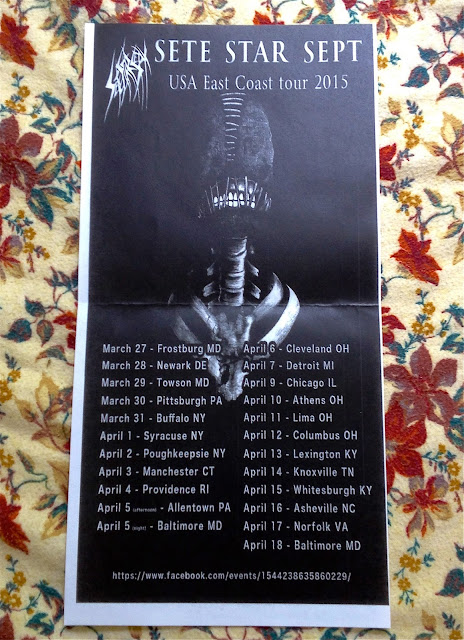 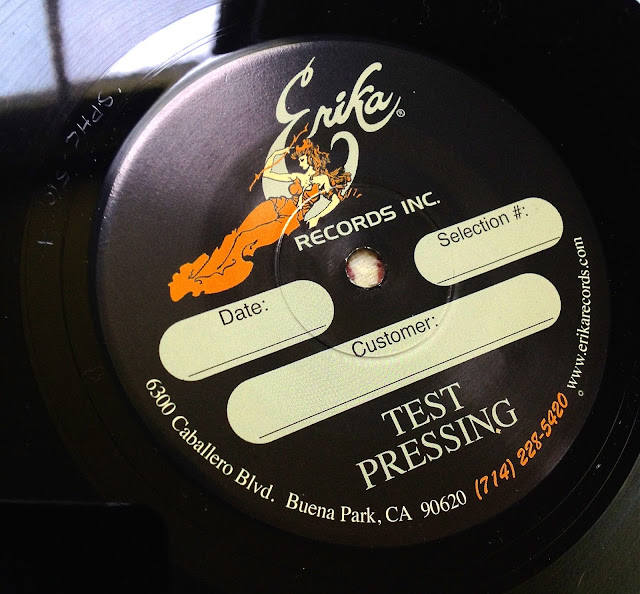 This record is actually out now on SPHC, which can be picked up HERE 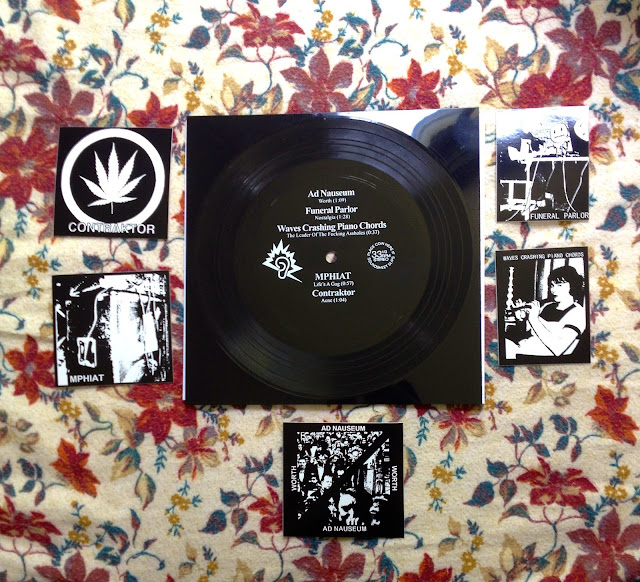 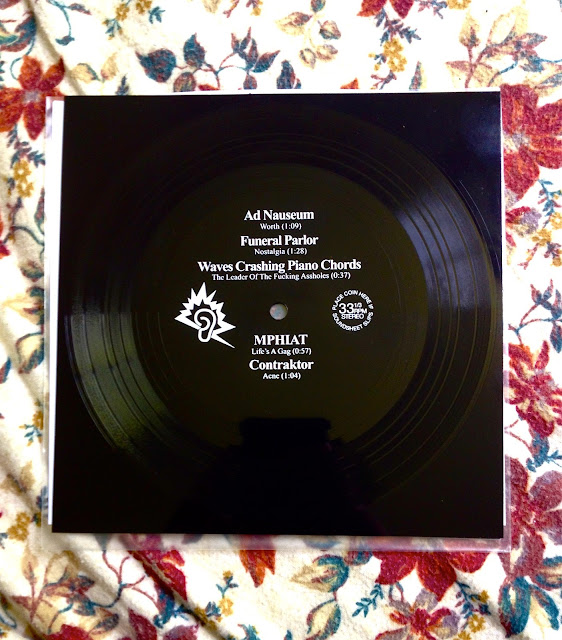 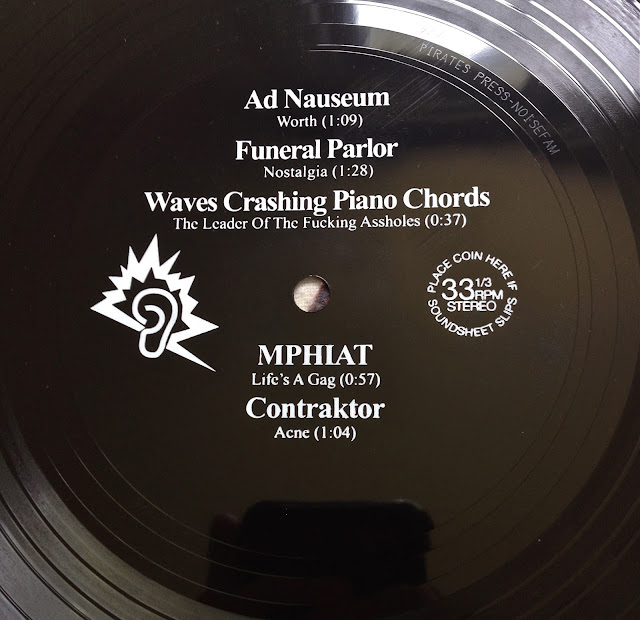 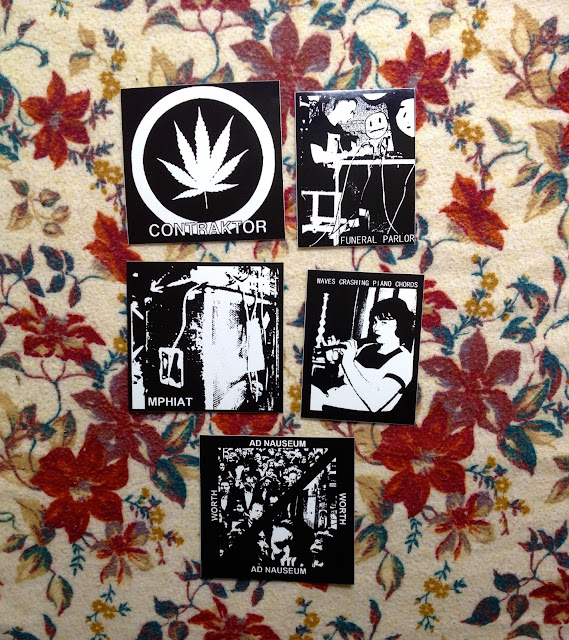 Limbs Bin's latest release on his own label, Follow Me Into The Laser Eye, is my highly anticipated split cassette with Tacoma, WA's fastcore titans Sidetracked. A rather unusual pairing on paper, given both bands respectably different styles of fast, intense music. Paired up solely out of mutual respect and interest in each others projects, I have no doubt. Which is definitely as it should be. Sidetracked's recent flirtations with the more abstract realms (The Gaz-66 Intrusion split, the "Escape" EP) definitely had me interested in what they were going to do. And it is by far their most unusual recording to date. Focusing on one slithering guitar drone with tension releasing bursts of vocals and drums. Limbs Bin does his usual drum machine n'noise onslaught, to a staggeringly level of blurred insanity. Some of his more intense stuff for sure. Like the last Limbs Bin split I posted about on here, you can read my full review for this split on Operation Grindcore. This post here will largely be just to show off the excellent layout and art by Alex York. 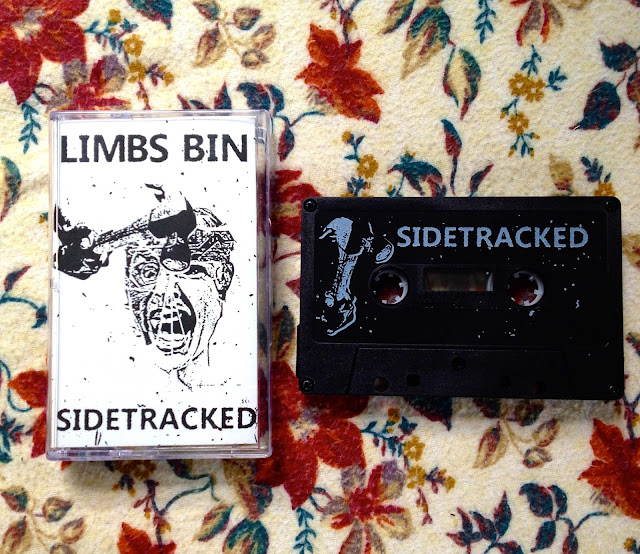 Once again, this is a fantastic looking tape. Mr. York's style really pairs will with Limbs Bin's releases. This is a professionally dubbed and printed C4 tape, with a fully printed-double sided J-card. I think it's limited to some unusual amount, like 64 copies. 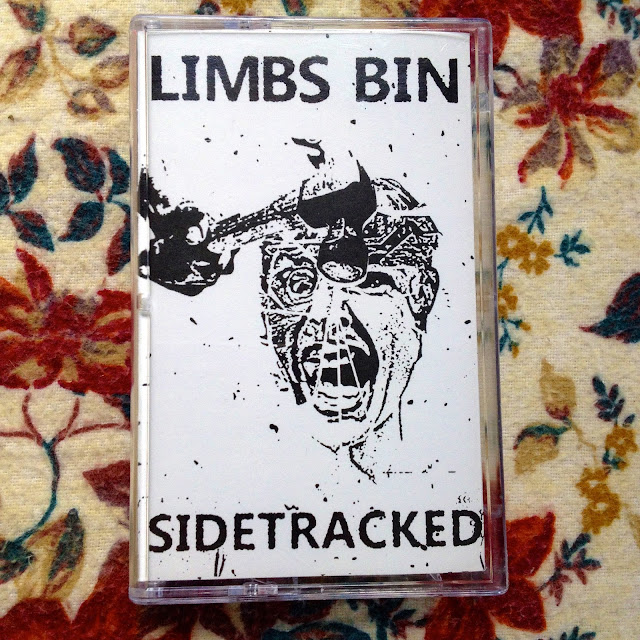 The art kinda looks like the shower scene in "Psycho" going through a fantastic 80's sci-fi movie poster filter. 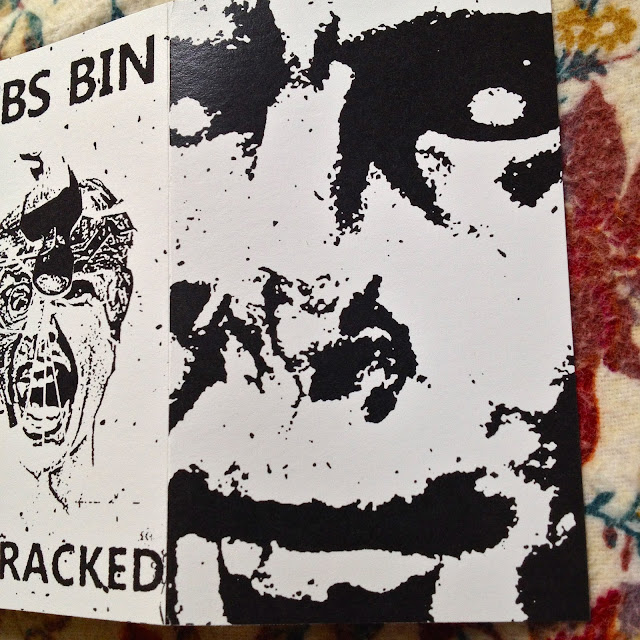 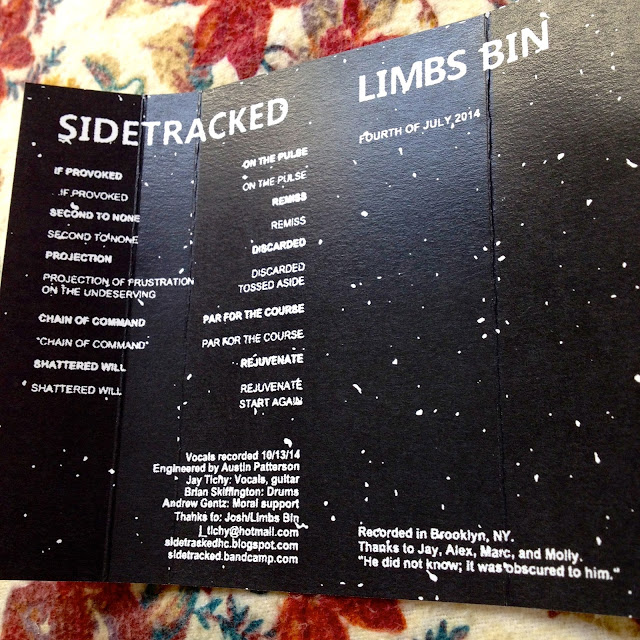 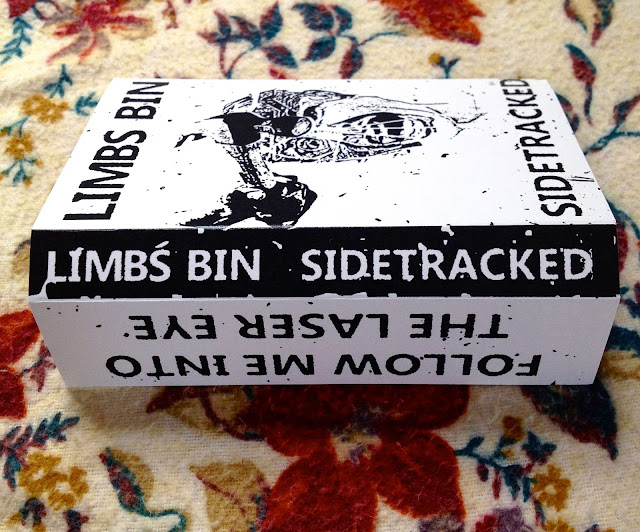 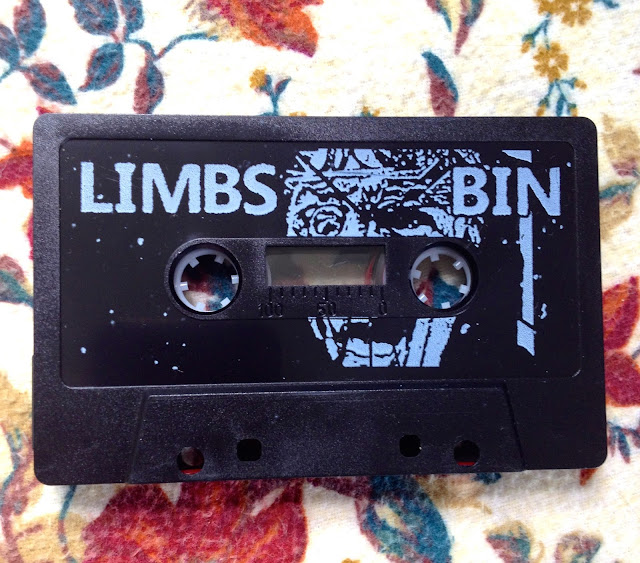 Copies of this tape are still available from Limbs Bin.