Sometimes in my self-appointed roll as a music critique, I am generously and randomly send wonderful packages from bands or labels in return for me to review their records or tapes on this blog. And given that I rarely buy grind albums anymore because of my severe lack of frivolous online spending, these instances really help keep things going. Even if I do feel undeserving of all the kindness sometimes (gifts are kinda sorta hard for me to accept). The next batch of posts will be regarding the longtime Rochester, NY band Hades Mining Co. and their Father label Continuum Records. Gotta give a big thanks to Continuum operator and HMC member Dave, for very generously supplying me with some of these pretty limited releases. So, thank you Dave.
I figured I'd start with a post about this record. Given it's been obvious how much I enjoy records by our favorite Japanese duo Sete Star Sept. Any new SSS record is welcome into my home, and this one is definitely one of their more interesting 7" splits. Black vinyl, limited to 149 copies on black wax (the rest were on color), 33 RPM. 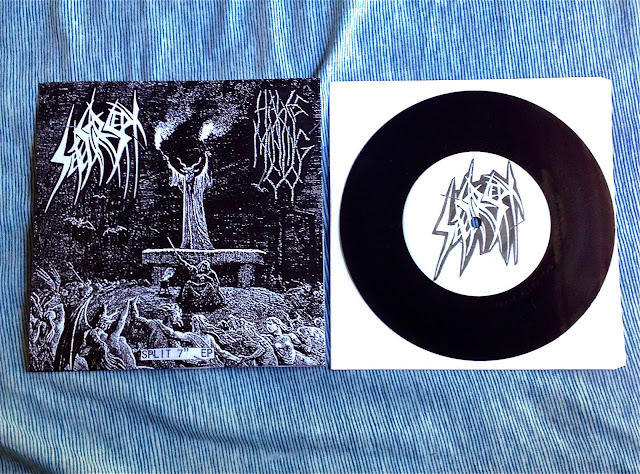 I've always had my eye on the latest batch of Hades Mining Co. splits. Even though I wasn't that initially impressed with them in brief streams online, they've been working with some cool bands. They're definitely one of those noisecore bands. They're totally oldschool sounding, genre fucking, completely free slopcore noise. One that you could write off as absolute talentless shit for their obvious wankery and fuck-you to actually "writing a song". Or a band you can take in with that great, sort of B-movie experience. Enjoying it for all it's flaws and just having some fun. And you're both right. Because goddamn this is shit, but I definitely do dig it. Four tracks make up Hades Mining Co.'s half. Opening up with a slow as molasses, drumless, doomy bass riff driven opus. Industrial, hissing guitar feedback and occasional soloing are a constant too. Basically sounding like the worst Sunn O))) cover band you've ever heard. HMC have embraced going totally slow and sludgy, which I think helps set them apart. It works better sometimes (definitely in this case) then others. The rest of their side goes more into standard noisecore territory. The second song even features a saxophone (standing ovation), and the band just proceeds to clusterfuck the crap out of anything resembling music. The last track is so lo-fi it literally sounds like a recording, of a recording, recorded and played through a cassette Walkmen. 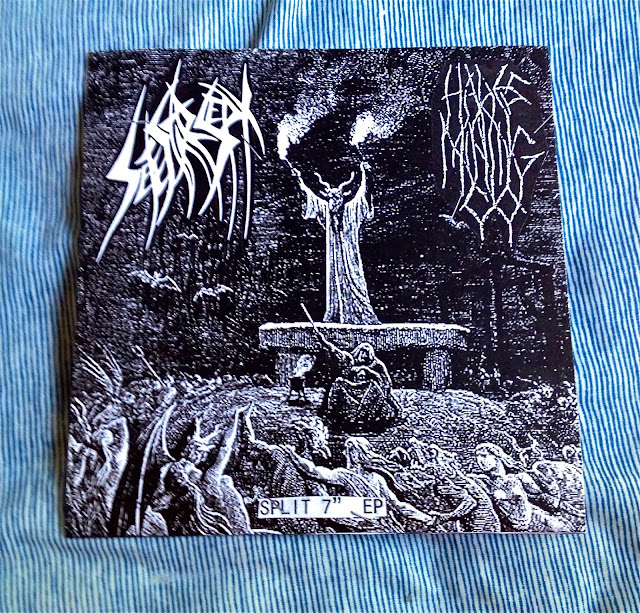 Sete Star Sept's side was a very interesting and fulfilling listen to me. I love it when SSS record stuff that's a little stranger, more adventurous and creative then the standard noisecore fare. Unfortunately these are usually kept for their VERY limited cassette splits and don't see much vinyl treatment. This batch of songs is definitely in the spirit of this side of the band. The massive opener (taking up more then half the side) consisting of almost riffless bass feedback, with sporadic drum hits from Kiyasu. Sort of reminds me of the last track from their split with Lung Cancer, the feedback almost works as a power electronics instrumental. The next 4 tracks, entitled "Square Root A"-through-"D" are quick instrumental noise bursts, ending with a track that consists solely of Kiyasu's drums and some cartoonish grunts. I've never heard the band be this bizarre and different on any of their 7"s. So that right there says something It's a wild ride, and is one of the more unusual vinyl splits from them that I own. 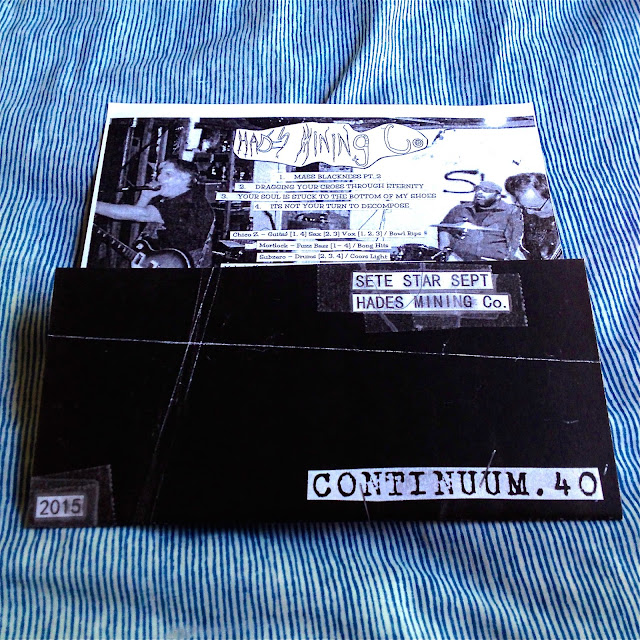 I always saw the black and white, fold-over cover packaging that Continuum gave their releases and was not impressed. But only because it just looked like photocopied covers on printer paper with low pixel count artwork. But actually no, these are professionally done, sturdy and glossy sleeves. I was very pleasantly surprised! Hades Mining Co. certainly keeps a consistent aesthetic, and I like that a lot. 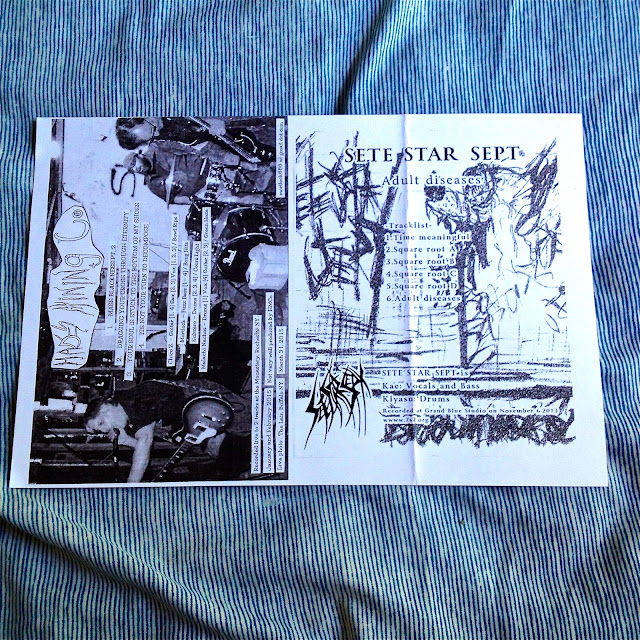 There were two 7"x7" inserts included for each band. Each one displaying an eye-bleedingly high amount of color in contrast to all this black and white. I kinda honestly wish these were the images for the sleeve, but it's a cool bonus. The test pressings were all adorned with these covers I believe. 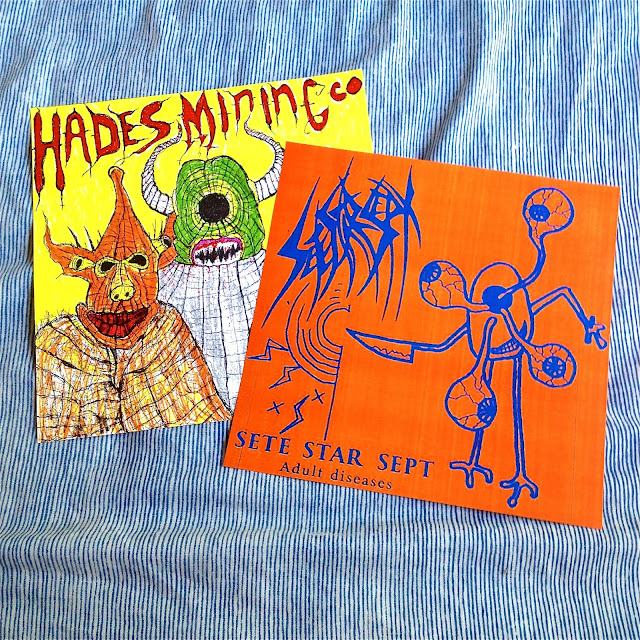 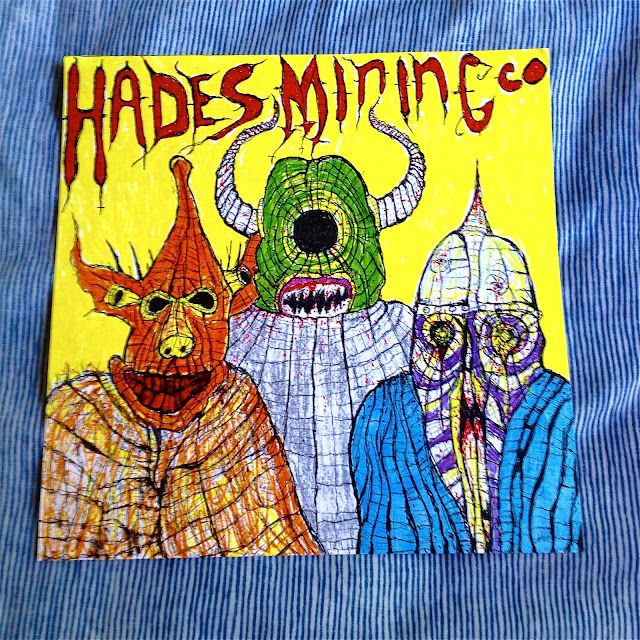 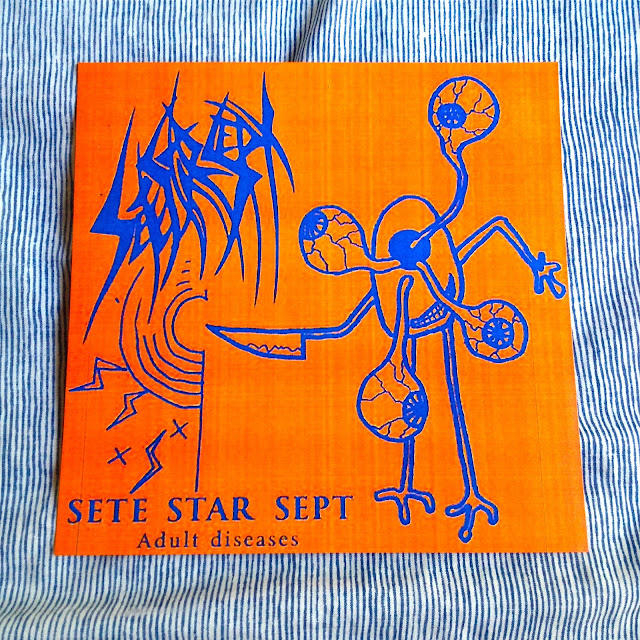 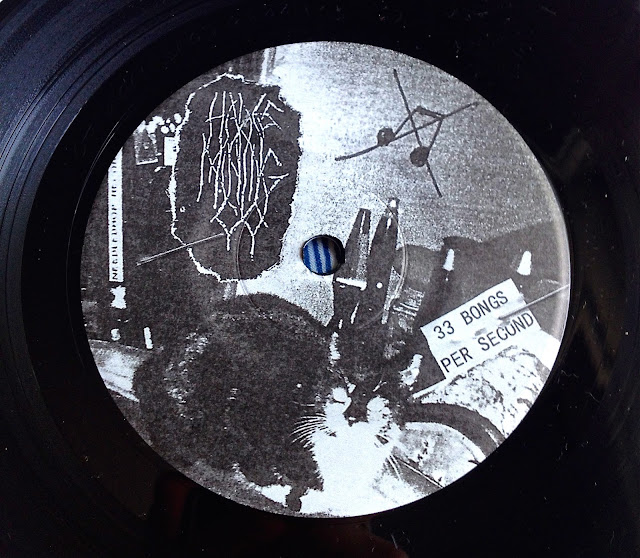 This split is still available from the LABEL, and I've started to see it pop up on Discogs. If you feel up to it, dive into this slop. For true noise freaks only.