An Interview with Hummingbird of Death

Here's a recent interview I did over email with Mike, the drummer from the fantastic Boise fastcore band Hummingbird of Death. This interview was done over email. Full support! 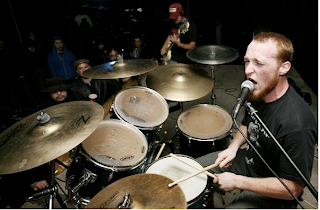 Built to Blast: For those who don't know, tell us how Hummingbird of Death formed.


Mike: Justin (guitar) and myself (drums) were in other bands together around 2004-05. By the summer of 2005, though, I grew really anxious to do a fastcore side project. Justin was the only guy I knew who could handle the guitar duties, so I asked him and he accepted. The two of us made a demo tape and it got such a good response that we decided to get a bass player and become a real band. We've been rollin' non-stop ever since.
BTB: How'd you come up with the name Hummingbird of Death?Mike: It really just popped into my head one day and I thought it would make a cool name. There's no story behind it.
BTB: You guys describe your band as fastcore, care to explain to people exactly what fastcore is?Mike: It's ultra-fast hardcore punk. The tempos, song structure, song lengths, etc. are all taken to as high a degree as possible. We've been trying to really stretch the boundaries of what the term 'fastcore' encapsulates. The most important thing is that it's rock 'n' roll.
BTB: What's the scene like in Boise? Is there a good amount of grind/fastcore supporters?Mike: The scene is very small, yet it's big enough to fragment into a number of social cliques that don't like to intermingle. A basement full of people can be counted on to roll out to a grind show in Boise. 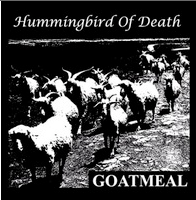 BTB: One of the things that I like about you guys is that it seems like you concentrate on songwriting. Like on the Goatmeal 5", each song is distinguishable from the others. Which is incredible.Mike: Well, thanks very much! We tried really hard to write good songs that sounded as fully realized as possible with a 4-8 second time frame.
BTB: What can you tell us about the upcoming Hummingbird releases?Mike: Well, we have a split 12" with the late, great Titanarum up next. That was recorded last summer, and I literally just approved the test press yesterday, so we'll be seeing that one released in the next few weeks hopefully. We just recorded two more releases, a full-length LP and a split 12" with Downsided. Hopefully those can be released this year. All three of these releases involve a lot of experimentation, hopefully people will be able to hang with them!     Also coming out in July is a very special limited single entitled "Archaic Technologies 2." I don't want to say much about it now, but there is a connection between the format and the title.Finally, we are learning songs for a split 12" with the mighty Cold World from Austria.
BTB: Your upcoming split 4" with xBrainiax seems so insane. Knowing you guys, I assume there will be about 35 tracks per side. Mike: I don't know if we can get that many songs on there! But I think we will take an approach similar to Goatmeal. We haven't actually written any songs for it yet, but I know that xBrainiax has written some.
BTB: Will it be the first 4" record ever made? Are you going to have to make some super special order to have it pressed? Mike: I can't name any 4" releases off the top of my head, but I know they've been done. Vinyl pressing technology has come a long way recently.

BTB: What's your song writing process like?Mike: 98% of the songs pop into my head more or less spontaneously. Then I bring them to practice and we flesh them out from there. Some songs take longer than others.
BTB: What music have you been blasting lately?Mike: A lot of melodic punk lately. Cigar, Satanic Surfers, Quadiliacha. Not On Tour is a recent discovery, they are incredible. Also, Weekend Nachos, Lack Of Interest, Sidetracked, and so on.
BTB: Any final words?Mike: Thanks for the interview man! Anyone in the northwest US, come check us out at New Direction Fest in Olympia, Washington, August 19-20. Visit www.hummingbirdofdeath.com to keep up to date with us.
-VII Caso-
Posted by VII at 10:35 AM