How amazing is it that both of the strongest members of the pioneering English power electronics band Whitehouse would release full lengths in the same year. How about that those albums are what many consider the strongest works in their respective projects to date? Mr. Bennett has been busy sitting on his laptop whipping out 12" after 12" of his "afronoise" project, Cut Hands. An interesting concept, I guess, but one I never took a lot of interest in. There's a very big blur of noise and techno/house music nowadays that is often times piss poor to my ears, but with a few very occasional exceptions. And I will admit the new CH record, "Festival Of The Dead" is at least decent and the most captivating bunch of songs I've heard from William so far. Meanwhile the second nut of Whitehouse, Philip Best, has stuck tremendously close and loyal to the roots of his greatest band with his side project, Consumer Electronics. Those roots being loud, abrasive, monolithic walls of harsh noise, perverse feedback abuse, and strong lyrical vitriol shouted out at demandingly fast rates. Here is their latest 2xLP, "Estuary English". 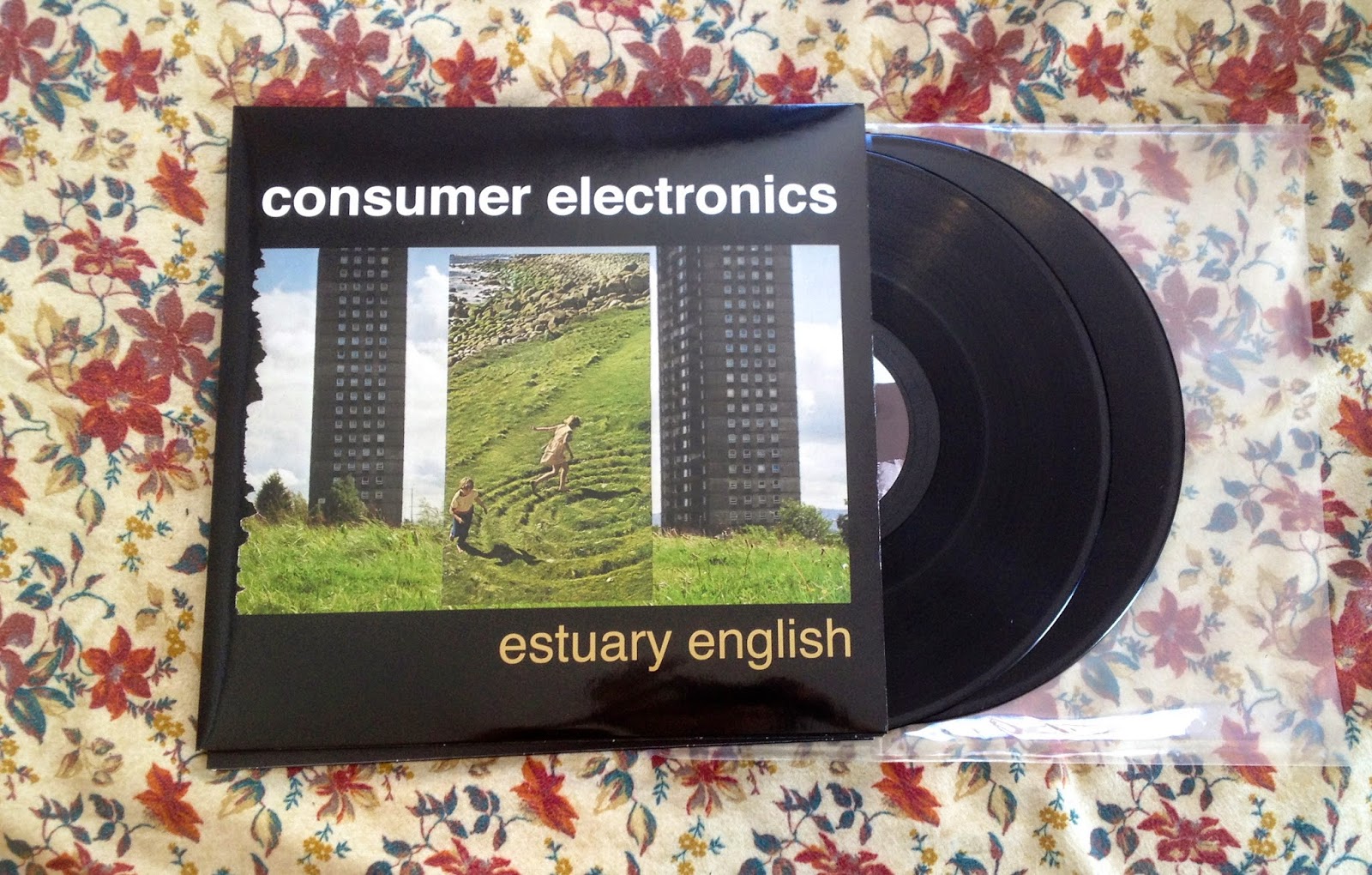 I probably will be playing a little catch-up with 2014, since this year has so far not given me very many incredible records yet. When "Estuary English" came out at the end quarter of 2014, it instantly ended on my best in the top 5 of the year list (which I've never posted, my bad). It is a brutal, hateful, diverse piece of electronic filth. Finely crafted and delivered with masterful performances by one of the genre's pioneers. This new chapter of Consumer Electronics is also a triumphant welcoming of the newest members of this unit. Philips now-wife, Sara Froelich, and Russell Haswell. Both doing a fare share of electronic work. 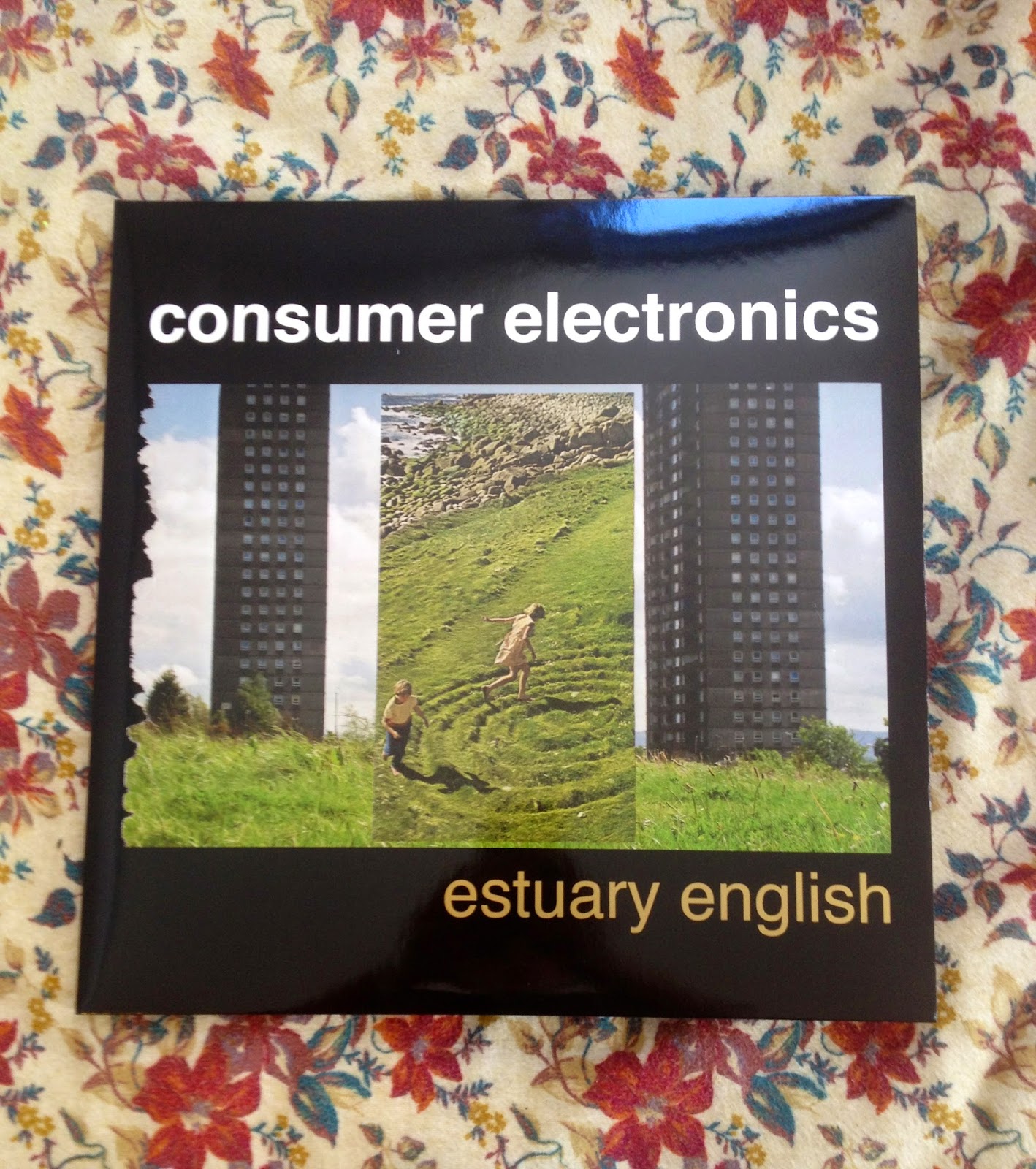 The bulk of "Estuary English" and it's 25 minute run time is Mr. Best and Co. performing their tried and true sound exactly as it should be. And time and age has only given Phillip more grit in his throat and more provocative, topical opinions. Tracks like "Affirmation", "Come Clean", and the title track
are brutal, punishing power electronics harkening back to the wonderful 90's Whitehouse records. And Philip sounds more dominant and frustrated then he ever has. Proving still that he is one of the genres more consistent and legendary performers. 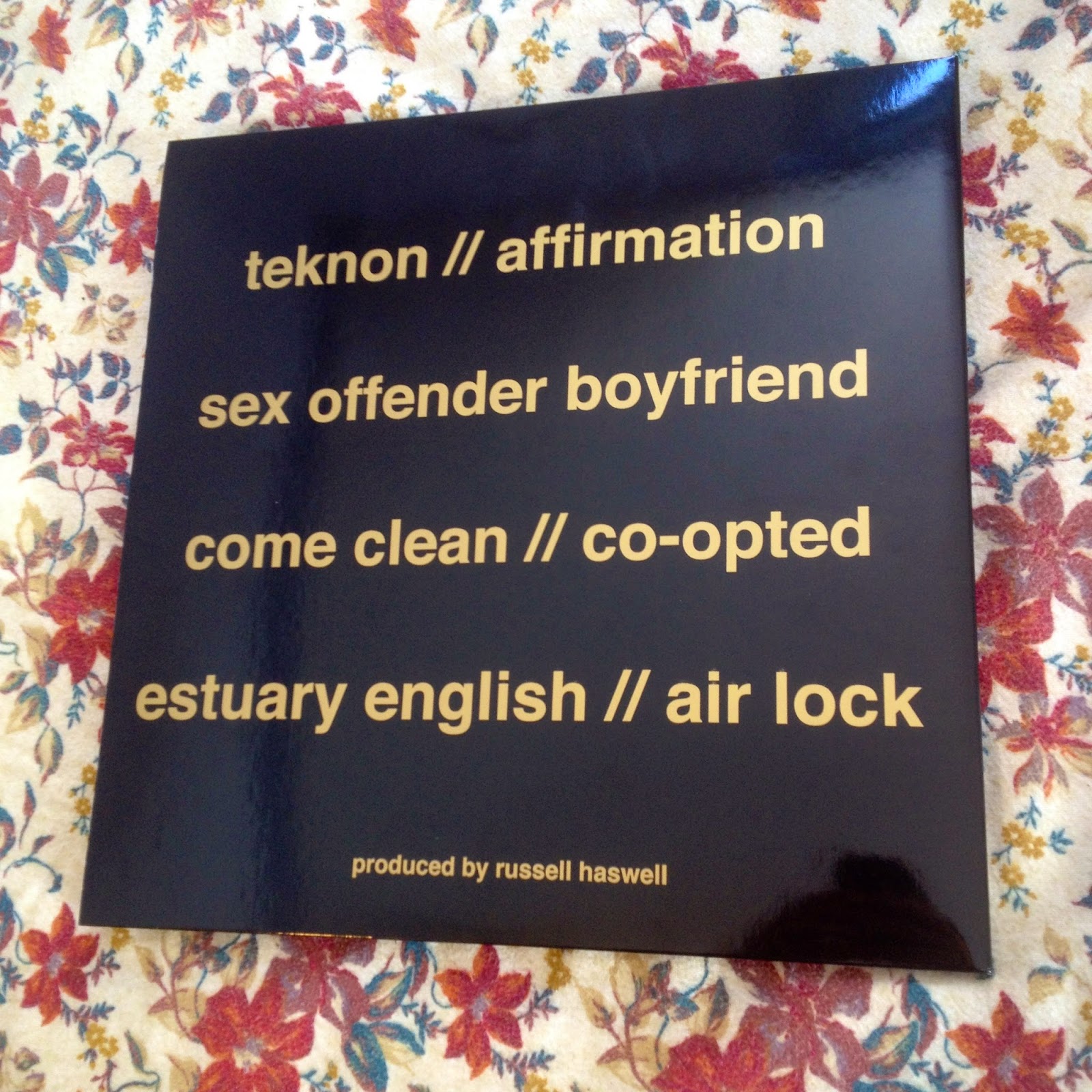 Now of course, "Estuary English" could have been just another Philip Best PE record, and that would have honestly suited me just fine. By this point, they could all probably bang out albums like this in their sleep. Which eventually can probably make a musician feel a little stagnant. The array of sounds an influences on this were upon first listen surprisingly large. The brilliantly minimal opener "Teknon", is a jarring track comprised of just thuddy bass blips and searingly aggressive vocals. Immediately I think of Whitehouse tracks like "Cut Hands Has The Solution". The centerpiece of this whole record, "Sex Offender Boyfriend" has the most ferocious vocal performance I've ever heard from Philip Best. Gone are the strongly enunciated, macho vocal jabs. Lyrics are toppling over each other here, spit in flying in your face, teeth are being gnashed and ground as everything is trying to get out at once. It's the vocalings of someone literally fuming with blind rage, absolutely astonishing. This is also the first taste of CE playing around, surprise, beats! A much more traditional, industrial style thankfully, with strong influence taken from classic Throbbing Gristle records. 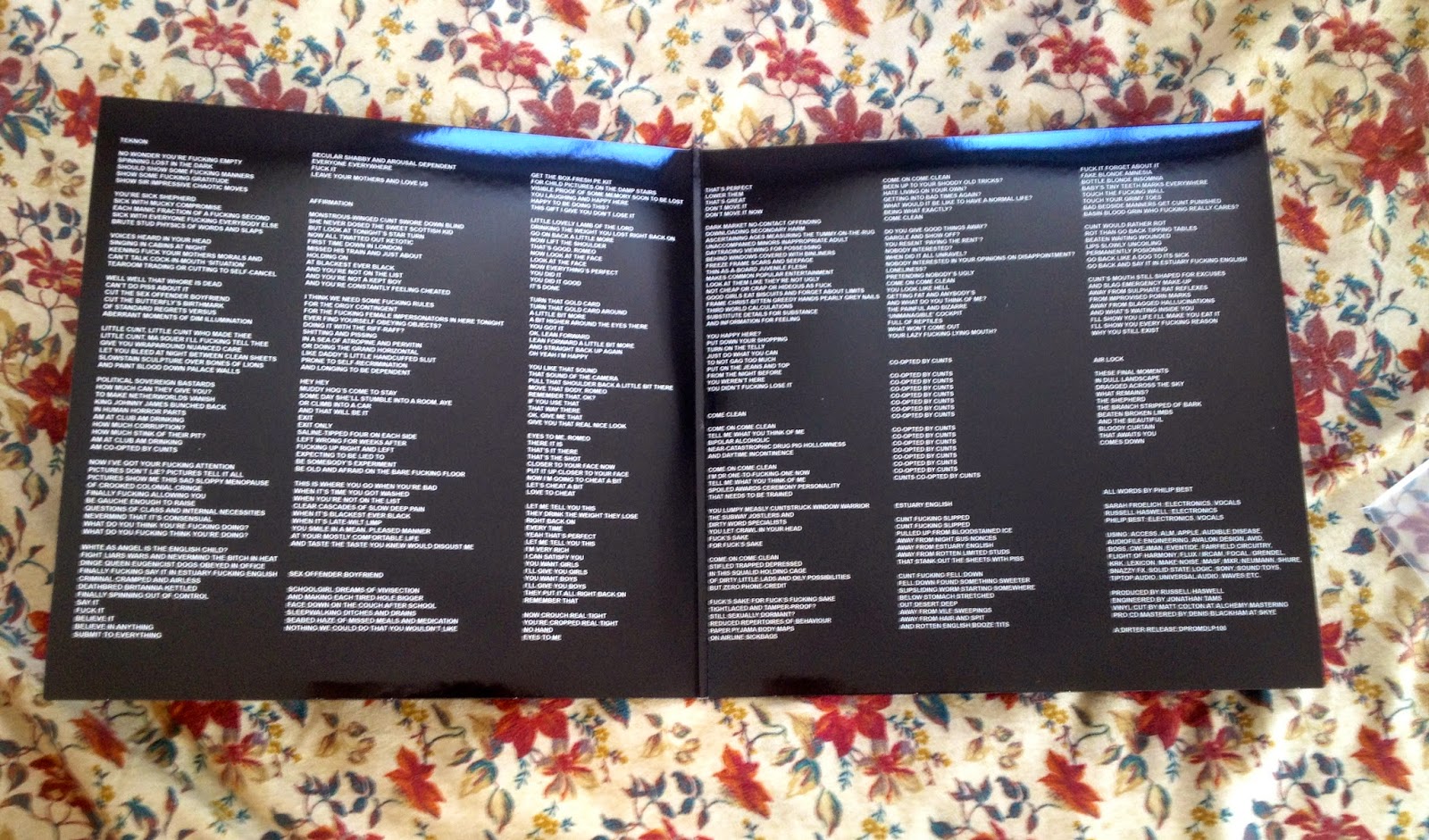 There does seem to be some sort of underlying concept and narrative on here. There are many jabs at English society, noise artists, and modern trends. From what I can loosely gather, the main protagonist is a younger woman who eventually slips deeper and deeper into the darker sides of the rave and club scenes. Which could explain the track "Co-Opted", a pulsing heavy house track with the only lyric being "Co-opted by cunts!" yelled over and over again. I imagine it be a track with sarcasm entirely in mind. Honestly, it's probably the albums weakest moment, mostly because it tracks on to an insufferable 5+ minute run time. The end track, "Air Lock" describing "these final moments", perhaps signifying the end, or the point of no return for our main character. 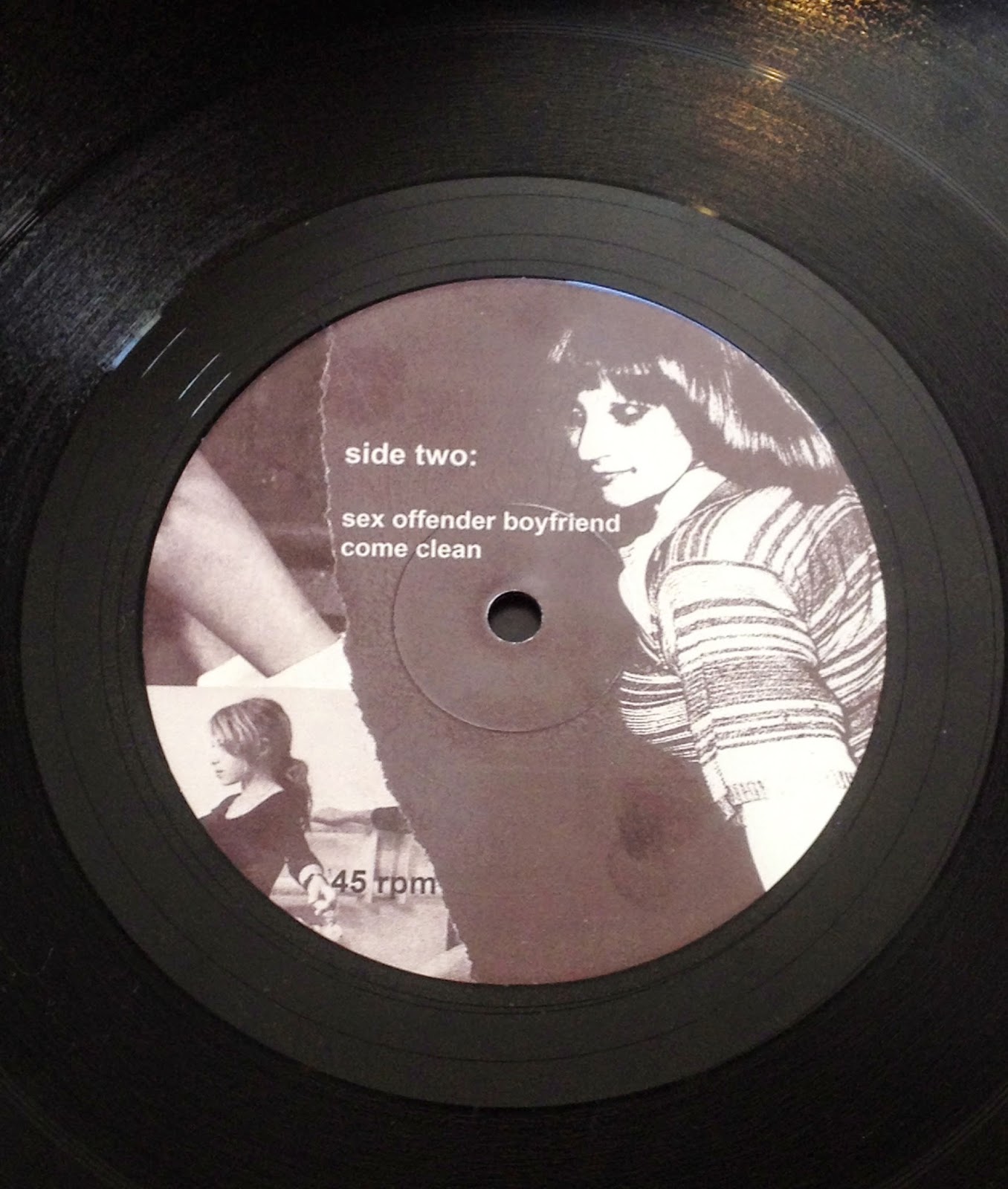 Presentation wise, "Estuary English" is stunning. Packaged in a beautiful, glossy gatefold jacket, and two thick pieces of wax cut at 45 RPM. The first run came with a CD of the album mastered spesifically for that format. My CD isn't pictured, but there's not much to show. 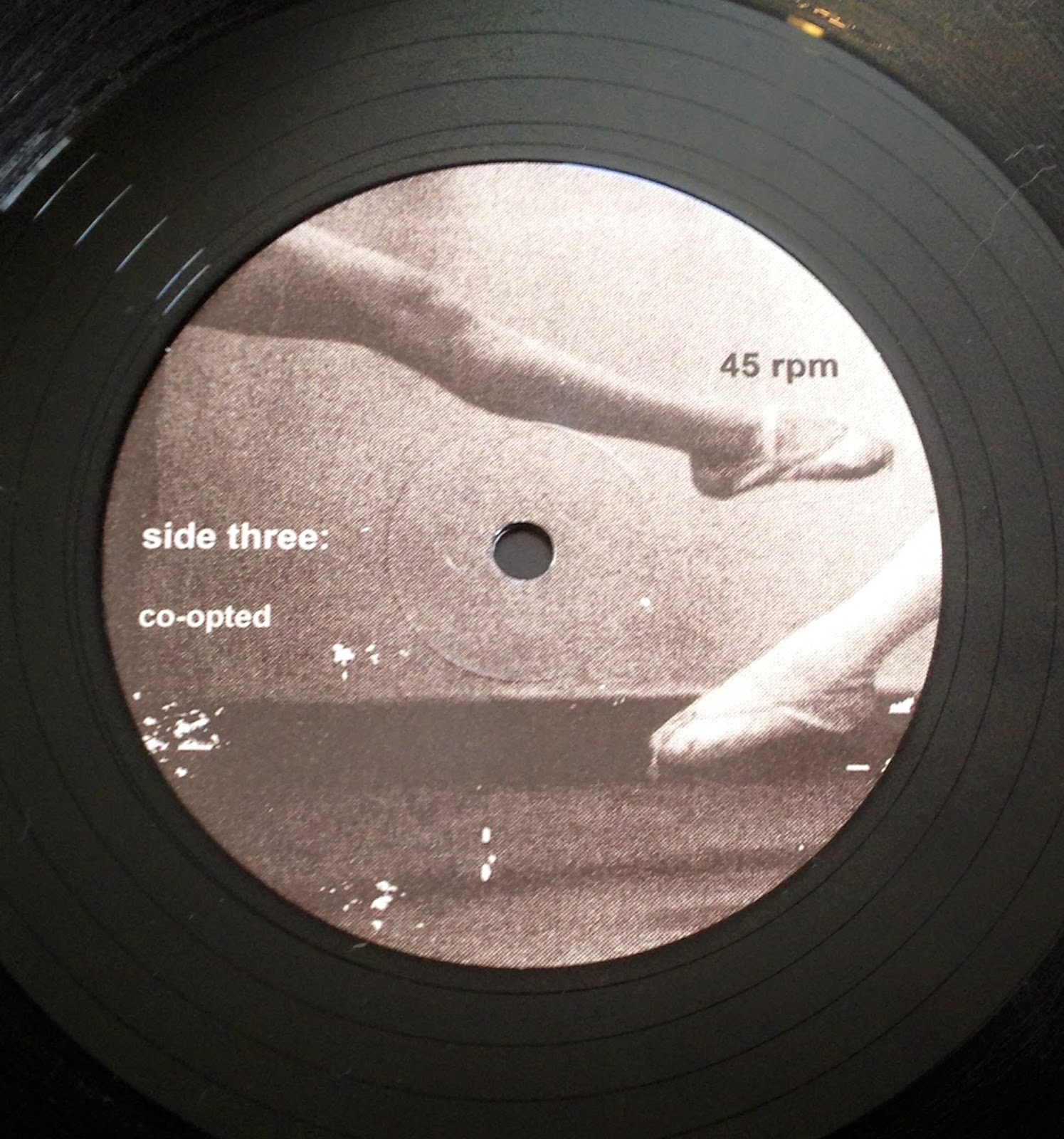 You can thankfully still pick up this album pretty easily. It's by far one of the most mandatory noise records of last year, and another proud achievement in Consumer Electronics career.