I am not the kind of record collector that likes to passionately waste their money on multiple variants of the same album. I've done it here and there for a few beloved band. Extortion and +HIRS+ being the first ones that comes to mind. Even then a lot of the variants were generous gifts or things I stumbled upon at an unbeatable price. I do empathize with the thrill of hoarding different variants and oogling over the minor to extreme differences between them. And honestly if it wasn't for economic responsibility I would probably be buying a few more color pressings of some choice favorites. One album that I can't seem to ignore buying multiple copies of however, is the monumental metal opus, "Master Of Reality". My personal favorite of the first four Sabbath albums, and comes close to being my favorite album ever. I've loved this album from the first time I heard it to this present day. Every time I listen to it I still get the same emotional and gut reactions, during the same parts since I first heard it when I was 7-8 years old. A few days ago I stumbled upon a very cool looking copy that I had never seen at a record fair. At the too-good-to-pass-up price of 8 buckaroos. Now is as good a time as any to post about it, ay? Here is my third copy of "Master Of Reality", on Warner Brothers Records, with a green shield label. 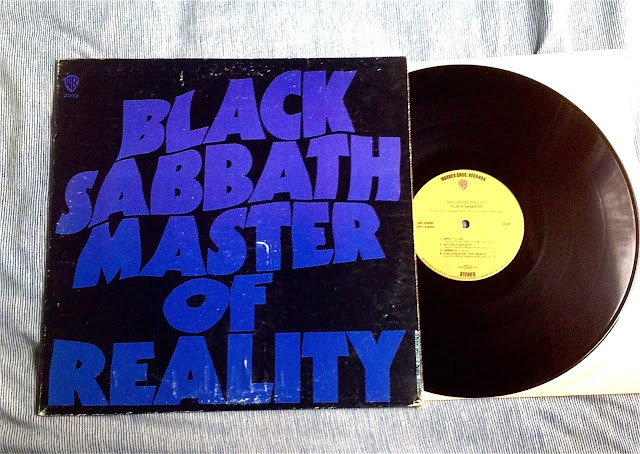 This album has been talked about to death and dissected over it's 30+ years of existence, so I won't go too deep into why this album's great. Because you certainly should already know. In fact, if anyone who is reading this right now has never heard "Master Of Reality", I dismiss you. You need to get on your metal tip and hear this.fucking.record. Incredible, monumental, masterful, perfect, and all of the above are adjectives I can apply to this album. It stands out in the bands first few classic albums for many reasons. For one, it's the heaviest album Sabbath made in the 70's, I don't care what anyone says. You thrown on a track like "Into The Void", or "Lord Of This World" and the crushing dirge of Iommi's guitar will floor you to this day. Those two tracks I'll even put against "Iron Man", "War Pigs", or "Black Sabbath" as the best songs of the bands career. Geezer Butlers bass has the heaviest presence in the mix of the classic albums. Holding the grooves down masterfully, while jamming and supplying tons of low-end heaviness. It's also one of Sabbath's most spiritual and religious-themed records at the time. A trait that I didn't pick up on as a child, but is almost overpowering when I hear it now. Especially on tracks like "After Forever" or "Into The Void". Depicting Jesus and God more as entities that are to be admired rather then blasphemed. It comes off a bit corny to me nowadays, but it does raise questions why people thought they were shouting "Hail Satan" in their music all the time.
When my parents first showed my this album, I'll never forget, it was like hearing my life come into focus. I was immediately hooked by the classic, sliding groove and hook of the "Sweet Leaf" riff. It was heavier and more captivating then any rock music I had heard at the time, and Black Sabbath quickly became my favorite band for many years. Man, so many memories and times spent with this album. It's honestly hard not to flood this post with my life's musical history, because this really is ground zero for me. Heavy metal music became a thing that I focused and obsessed on constantly, and it really paved the road that my life would go down over the years. And here I am; still going crazy about music, and still supporting the loudest, dirtiest bands. Maybe not so in love with metal these days, but no matter what dominates my interests, "Master of Reality" will always hold that special place in my heart. 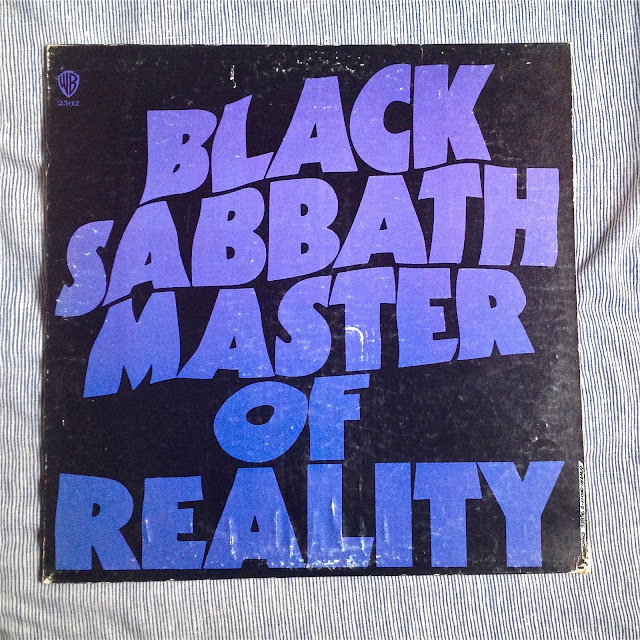 So, this here beaten and rustled looking copy is a really cool looking variant from 1971, manufactured in America. Of course, the all-blue text is what sold me on buying it. I had never seen any copies that looked like this and I think it looks so cool!! Apparently this was a "club edition" pressing, whatever that means. Probably not a part of the first press because the cover doesn't have embossed lettering. It doesn't include the extra tracks in the listing like the very first runs (I do have a super beat copy with them though, pictured below), so I'd reckon this is a 3rd or 4th issue. Sounds great too, the vinyl's in pretty decent shape. 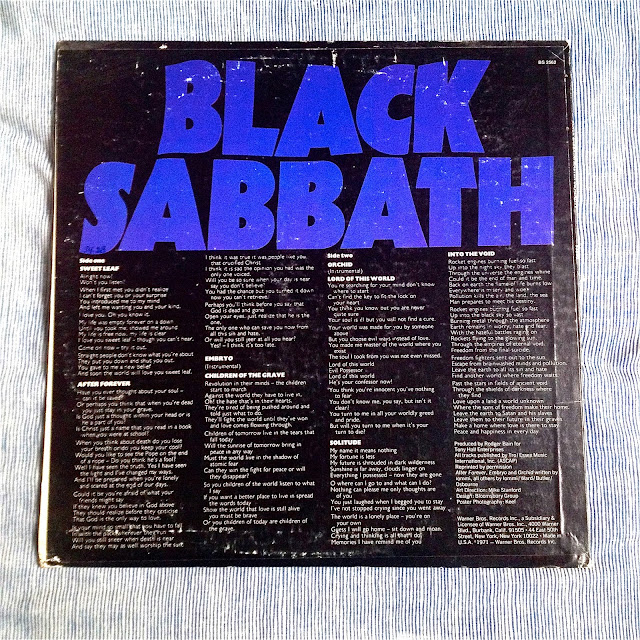 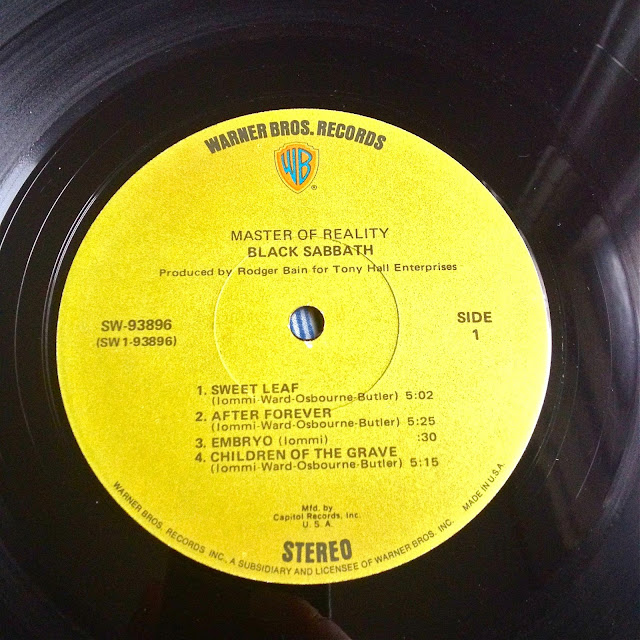 Here are all my copies so far. Starting from the top, we have a 1971 press with the extra titles. A beautiful NM copy of a later Warner Brothers pressing with embossed letters (my main playing copy), and the newest edition. 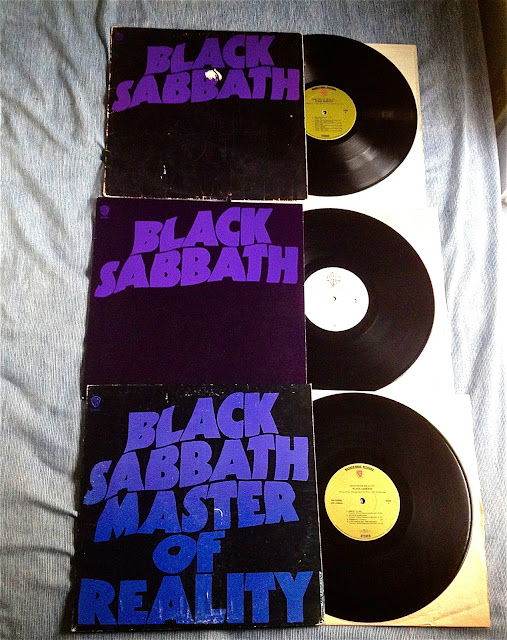 I still would love to get an original Vertigo label press, but I'm not holding my breath on that one. I wouldn't mind getting a 180g. pressing too, just too hear it remastered. One of the greatest albums ever.