Here is the first post to this new blog, and I got to start this out strong. So here's my most recent vinyl score I purchased today at my fantastic local record store Angry Mom Records. Y'all should know Infest; legendary, pioneering west coast powerviolence from LA. This is their first full length album released on a Swiss label called Off the Disk records. 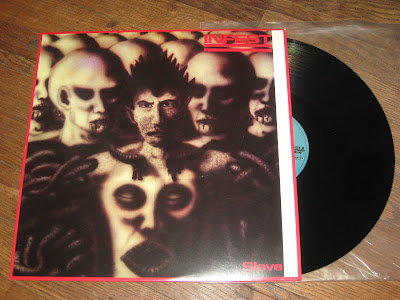 Note the album cover. This is the original art used on the first pressing. Later pressings like the Deep Six records reissues used the stark black-and-white-prisoners-of-war photo. The type of imagery that has become synonymous with Infest. Also note the fugly-ass white bar on the side. I don't know why that's there, but sadly, this means that this is not an OG pressing. 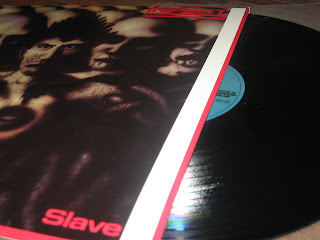 This is an unofficial release that apparently came out last year. The label that put it out seems to be a spin-off of Off the Disk records. The matrix etchings say OTD 2, try and figure that out. However, for an unoffical release, this thing sounds surprisingly good! All the instruments are heard, the vocals sound pissed, the bass is crusty as fuck. The drums are a bit muffled, but not a lot. Overall, it's a pretty decent sounding boot. I've had good luck with unoffical Infest releases actually. I bought a boot of their 1987 demo on 12" a while ago, and it definitely does not suck. 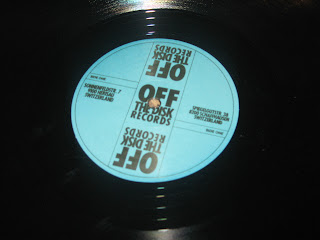 Whoever put this out did a great job with the presentation. All the colors are very bold, especially the whites. The blue center label is a nice touch as well. 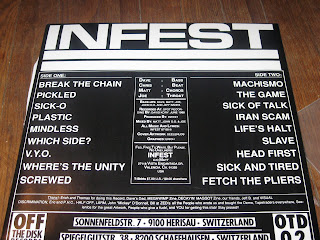 I especially dig the insert with that great photograph of Joe Denunzio screaming his guts out.  Lyrics are included on the flipside of the insert as well. The vinyl itself seems to have this really dark blue color, but it doesn't seem to be transparent or anything. 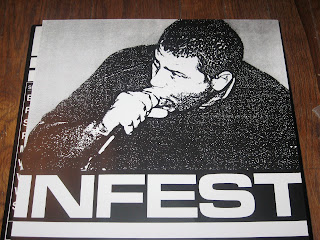